The first words of the child 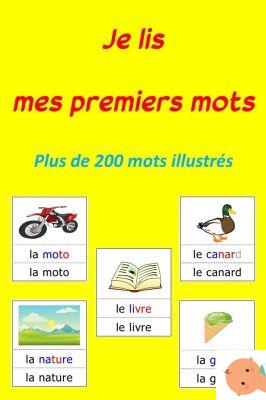 Language in the child

The first words of the child: what an emotion. The language development it is something natural and spontaneous, which does not need to be taught: any child, placed in a community of speakers acquires language, through its various phases and starting from some fundamental prerequisites.

Here's how the fascinating happens path that leads a child to talk.

The development of the language, in the child, it already starts fromlast trimester of pregnancy, when the auditory structures develop and the child is exposed to the language he can hear already inside the mother's belly.
When born, the child is predisposed to learning all languages and it is only around the year of life that the language specialization stabilizes: that is, the child selects the native language to which it is exposed and gives meaning only to the sounds that appear in it.

Read also: What does the fetus feel in the belly

The fundamental prerequisites of language

In the first months of life, the basic prerequisites of language develop

When one thinks of language, one immediately thinks of verbal production: in reality the child does not begin to speak out of nowhere and his first first words are preceded by some stages, which constitute i fundamental prerequisites of language development.

The first prerequisite is the intentional communication which is expressed through gestures: "Around 10-12 months, the child uses the indication for enter into a relationship with the adult, obtaining an object or sharing meanings "explains the speech therapist." Not for nothing when he reads a book or sees an interesting thing he points to the figure to share the event with those in front of him ";

Subsequently, after 14 months, i symbolic gestures, that is gestures that express a concept and that are used instead of the word: a classic example is when you rotate your finger on the cheek to express the concept of good;

Another prerequisite, which begins to appear since 8-10 months and gradually increases, it is there understanding of words within a communication routine: for example when the mother prepares the baby food and puts the baby on the high chair saying 'now let's eat the baby food', the baby abstracts that term and links it to its meaning. And so every time mom says that word, she'll know it's time to eat.

The passage from the real to the symbolic

Another fundamental step for language development is the ability to pass from the real to the symbolic: a skill that the child begins to acquire around the age of 2 with the game of 'pretend without having a real object - for example when he pretends to feed the doll without having anything in his hand - and then moves on to the phase in which an object acquires a symbolic value, such as when he pretends to give a pulp of leaves and pebbles saying that it's minestrone. Finally, from the age of 3 onwards, to role-playing games, in which she pretends that 'I am ... and you are ...'

Learning to speak does not mean repeating words

Learning the language therefore it does not mean mechanical repetition of a word heard, but above all understanding: the more children understand, the richer the symbolic gestures, the more there will be a significant correlation with vocabulary when it comes time to pronounce le first words.

Read also: The development of language

The first words a child speaks

What are the first words a child utters?

The production of real words is preceded by the so-called lallation, which appears between 6 and 8 months. "Lallation is not yet a language, but one functional experimentation for language development"says the speech therapist." It could be defined a game that the child plays with his phono-articulatory system, when he lowers his jaw and tries to let the air out; an experiment he likes so much that he keeps repeating it, always producing the same syllable. It is the moment when it is easy for the sound 'mom' to come out, because the most common experiment consists precisely in lowering the jaw and joining the lips alternately. In reality, the child has not yet associated that sound with its meaning: over time, seeing that every time she pronounces this sound the mother appears, she will begin to attribute meaning to it and to use that first word to recall the adult ".

From the year of age, cthe production of the first words begins, up to 2 years, when the child should be able to produce between 50 and 80 words. "Not all children begin to say the same words and everyone has their own communicative style: there are those who pronounce more words but less understandable, others fewer, but more similar to the adult's production" explains Alessandra Resca. "Generally, however, the first terms refer to mum and dad, both because it is important for the child to recall her reference figures, and because they are the easiest to form from an articulatory point of view".

The complete acquisition of language

During the second year of age the child perfects the phonological rules, which allow him to understand which linguistic sounds can go together to create meaning and share it. Up to the age of 3, when the acquisition of language, phonology, basic grammar is generally completed. The only thing that will continue to expand throughout his life is the lexicon, that is, the richness of his vocabulary.

Read also: Language: how do children learn to speak?

What to do to stimulate language development

Talk to him and listen to him

Precisely because it is a natural process, there is no need to do some kind of 'training': to stimulate him it is sufficient to talk to him and play with him, just paying attention to respect the communication shifts: the parent speaks, then stops and listens to the child, taking up the spoken word from him and repeating it correctly or inserting it into a larger sentence.

Don't ask him to repeat the words

Listening to us speak, the child will spontaneously repeat one or more words. "If he is wrong, we do not ask him to repeat them until he tells them correctly: it is enough for the adult to take that word and give a correct model" underlines Dr. Resca. "Having a term repeated does not have any kind of usefulness, on the contrary it interrupts the spontaneous communication and the relationship with the other. Which are instead at the basis of language learning.

Another effective stimulus is narration: "That is, to tell fairy tales or other stories, perhaps looking at the figures of a book together" suggests Resca. "It is important to tell and not to read, because the written language, even though it is children's books, is still difficult. In the story, on the other hand, there is much more involvement, a more adequate choice of words and the right intonation, that help the child to give meaning to what he hears ".

Why is he crippling the words?

Around the age of 2, when the learning of phonology is still developing, it is easy for children to make several mistakes, because they have yet to acquire the processes of combining phonemes to transform them into meaningful words. "It can fit, as long as it does not concern all the words it pronounces and does not last over time: by the age of 2 and a half the child should have an almost complete set of sounds and an understandable language" says Resca.

Read also: How speech develops in children: 20 things to know

How to understand if there is any problem

Each child has his own times and it may be that someone speaks first, someone later, someone speaks more correctly and others less. However, it is important that an expert examines any delays in language development.

In the first instance, the pediatrician is contacted

It is the pediatrician who, through periodic checks, can report if there is something wrong and possibly ask for a consultation with a speech therapist specialist, who, through simple standardized tests, can frame the situation.

"For example, if at the age of 2 the child has not yet learned the fateful 50 words, however, he has an adequate understanding, a good symbolic ability, is able to communicate well through gestures of indication, he has walked in time, he makes sure that there are no hearing problems , then the specialist can advise to wait and periodically re-check the child's progress "explains the expert. "If, on the other hand, he does not produce words because he does not have adequate understanding and has little symbolic gestures, it will first be necessary to ascertain that there are no hearing or neurological disorders.

Once organic causes have been excluded and it has been ascertained that it is a delay or a language disorder, a speech therapy therapy will help which, started in time, will allow the child not only to recover his language delays in the best possible way, but also to prevent future difficulties in learning to read and write ".

add a comment of The first words of the child