The importance of grandparents for grandchildren 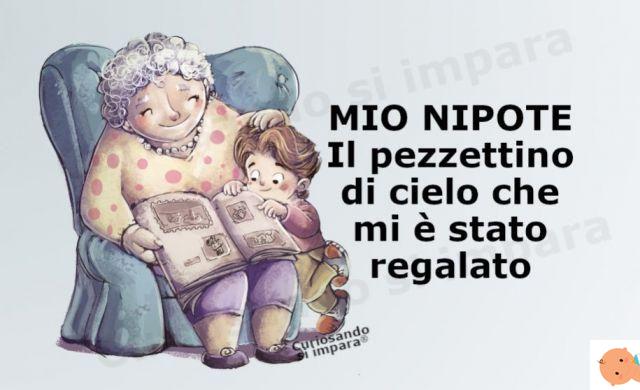 I grandparents they have always been a pivotal presence for the growth of grandchildren. Yet today their figure is very different from that of the past: not only for a question of resources to invest, but because they often have a "youthful" attitude that differentiates them from those of the past.

What has remained unchanged is theirs importance in the emotional and relational growth of children. In this regard, we asked Alice Moncelli, active pedagogist on The pedagogist's corner to explain us all the benefits of this familiar figure.

The importance of grandparents

Why are grandparents a pivotal presence for grandchildren?

“We must first of all consider that, nowadays, grandparents look after and take care of their grandchildren when their parents are absent, and in many cases they also give financial help to the family. Their presence is undoubtedly a comfort figure, not only in the care and care of grandchildren, but also because their presence represents one resource from a practical and emotional point of view».

Read also: Sleeping with grandparents for one evening

Teachings and values ​​passed on by grandparents

What are the teachings, and above all the values, that the little ones can learn from their grandparents?

«Generally, a unique, magical and special relationship develops between grandparents and grandchildren in which to learn how to grow and deal with life. A grandfather or grandmother convey not only a sense of tradition, but also of continuity between old and new teachings, in a sort of "educational pact". Grandparents can also teach a grandchild to have more patience and to respect the times of a person "with a certain age" ».

Going to grandmother's for lunch (and enjoying her delicacies) in many cases represents one of the first outings without parents always around:

«Their figure also helps to guarantee for children a detachment from parents serene: being with grandfather and grandmother (thus without attaching themselves to mother's skirts) pushes them to be more independent, and develops their ability to socialize ».

The benefits of a relationship with grandparents

What benefits do children get from a positive relationship with their grandparents?

“Grandparents act as emotional support for grandchildren, guaranteeing a protection factor in those moments when the parent is absent (for health or work reasons), precisely because of the strong emotional continuity they ensure ».

Not just a rock and a fixed point: grandfather and grandmother can also be fun. «Today grandparents are increasingly inclined to play with their grandchildren, offering themselves under a playful aspect, as real playmates to have fun with ».

In a social and hyper-connected world like ours, what attraction can grandparents have for very young people who, for example, do not know how to use smartphones?

«I believe that technology is not a disabling factor to the relationship, quite the contrary. A grandson can teach his grandfather or grandmother to use a mobile phone or to approach a tablet or computer, and thus pleasantly reverse the roles. It can become a moment of play where the grandson teaches the grandfather to use complex technological means, urging an elderly person to learn what he does not know. Every occasion can become a playful moment: you can use the camera of a smartphone or tablet to take pictures together, look at them and write a story together on the computer ».

Read also: Technology and children, at six months one in three uses smartphones and tablets

How to foster the relationship between grandparents and grandchildren

Are there any tips that can help parents foster the relationship between grandparents and grandchildren?

“Of course, for example by showing both grandparents and children the multiple activities they can do together". A grandmother will be, for example, a perfect sewing and cross stitch teacher for children of age to handle a needle or a guide in the kitchen to pass on traditional recipes to grandchildren, while the grandfather can teach them to fix a clock or write with a beautiful cursive handwriting cards and letters for parents and friends.

Every moment spent together with the reunited family can be a good opportunity to foster the relationship between the various members "above all through active example, making present with gestures and words how grandparents are a staple and comfort for the whole family ".

Activities for grandparents and grandchildren

So what kind of experiences can grandparents and grandchildren share?

«Grandparents can teach a child many things, and there are many activities to do together. From telling them fairy tales of our tradition, to teaching the little ones how to take care of a vegetable garden. Or convey the pleasure of a nice walk in the open air. But also to instill interest in home activities, such as preparing a cake or jam with fruit just bought together », concludes Alice Moncelli.

On the topic of grandparents:

TAG:
The importance of the secret diary in pre-adolescence and adolescence. Despite the social. ❯

add a comment of The importance of grandparents for grandchildren