The importance of routine in atopic children 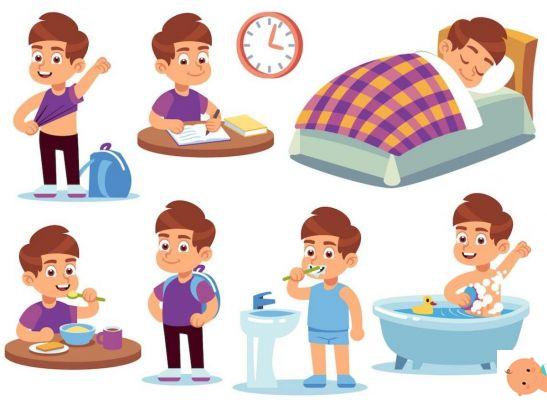 Having a child with atopic dermatitis it can be challenging, first of all for the child but also for the parents: since it is one chronic disease with relapsing course, during childhood there can be phases in which the skin does not give any problems, but also in acute phases, in which eczema causes intense irritation and itching, which cause nervousness to the child and interfere with his night's rest.

Proper management of atopic dermatitis allows you to relieve your child's discomfort, prevent flare-ups or lengthen the wellness intervals for his skin. And bring serenity back to the family. there all the daily attention that can be good for an atopic child and useful measures to take.

Atopic dermatitis is the most frequent chronic inflammatory skin disease in pediatrics (about 10-20% of children in Western countries suffer from it), characterized by redness, blistering and itching, in different areas depending on the age of the child and the extent of the disorder. The skin is generally dry and very sensitive to various irritants in the environment. The causes of atopic dermatitis are not fully known, but there is certainly a genetic predisposition and a greater fragility of the skin barrier.

Read also: What is Atopic Dermatitis

Atopic dermatitis can present with different characteristics, depending on the age and individual predisposition, and there is no single and decisive therapy for all children or for all stages of the disease. This is why it is a disorder that can put a strain on parents, who often complain of having tried various remedies without coming to a solution. And they feel alone and helpless in the face of a problem they don't know how to manage. For a correct management of dermatitis, the first step to take is to contact your doctor (pediatrician or dermatologist), who will first verify that it is indeed atopic dermatitis and then, depending on the extent and location of the lesions and discomfort felt by the child, will be able to recommend the most correct approach.

To improve the skin and soothe irritation, it is important to keep the skin well hydrated at any stage of the disease. "The skin of an atopic child is drier than normal skin, which is why it is essential to always guarantee the right nourishment, constantly applying specific creams, not only in the areas where eczema tends to appear, but on the entire skin of the child. face and body "explains Annalisa Patrizi, Full Professor in Dermatology at the University Hospital of Bologna - S. Orsola-Malpighi Polyclinic. "A gesture that should be repeated even twice a day and which for this reason can be rather boring for the child, but it is a small sacrifice that can effectively help relieve itching, reduce inflammation and strengthen the skin barrier. 'today, in fact, creams are carefully studied to reproduce the composition of skin fats in their formulation ".

Use medications if needed

In the acute phases of atopic dermatitis, the moisturizer will be combined with an anti-inflammatory drug: cortisone ointments are generally prescribed, which must be applied in the evening, first daily, then thinning out the applications up to a maintenance therapy with 1-2 applications per week . Parents are often afraid of using cortisone-based products: "If used correctly, following medical indications, the topical cortisone does not cause any problems" calms the dermatologist "especially if the latest generation of cortisone are used, such as mometasone , methylprednisolone or fluticasone propionate which, in addition to being very effective, are very poorly absorbed and do not cause the so-called rebound effect, ie the risk that after discontinuation the dermatitis may worsen. As an alternative to cortisone, the dermatologist can evaluate the opportunity to prescribe other anti-inflammatory drugs, such as topical calcineurin inhibitors ".

Understanding the discomfort, even psychological, of the child

Atopic dermatitis can cause a lot of discomfort to the child: the intense itching causes him to scratch, both day and night, worsening the lesions and increasing the urge to scratch, in a vicious circle that makes the child even more nervous, who seems not find relief in any way. To the physical discomfort is added the psychological discomfort, because especially older children are ashamed of their skin, especially in front of peers.

Transmit serenity to the child

Atopic dermatitis it is not a psychosomatic illness, however it can be affected by the emotional state of the child, which it can increase the perception of itching. This is why it is important for the parent not to scold the child if he appears restless or does not sleep at night, not to be apprehensive about his condition, but to show that he cares about his problem and to instill in him the confidence that he is on the right way to. keep annoyance under control.

For a child, reading tranquility in the parent's eyes is the first remedy to calm down!

The experts of the UOC of Dermatology of the Bambino Gesù Hospital in the city have developed a guide in which they illustrate some non-pharmacological techniques useful to facilitate the management and control of unpleasant sensations related to dressings and itching. Strategies that aim to distract the child from his problem, shifting his attention to something pleasant and engaging, especially in times when the itch is particularly unbearable.

Depending on the age, there are for example breathing techniques, visualization, distraction, relaxation, meditation. Always in playful and fun form!

Involve him in the application of creams

The Bambin Gesù experts also suggest trying to involve the child, starting from about 5 years old, in the application of the creams: you can begin to give him a small amount of cream between the fingers, so that he can experience the tactile sensations or that he tries to 'medicate' his baby doll, to the point of making him spread some on his injuries: the very fact of actively participating in the procedures distracts him from the annoyance, making him concentrate instead on the action to be performed. In addition, he feels the satisfaction of feeling treated 'when he grows up'!

Take advantage of the application of the cream to pamper yourself

In the long run, the child may be a little reluctant at the idea of ​​having to apply the cream every day and may conceive this gesture as something punitive. In this case it is good to explain to him that the cream is not a punishment but that it is an essential routine to make him feel better. Indeed, since it is repeated every day, it can become a pleasant 'fixed appointment', in which mum or dad are at his complete disposal, to give him a nice relaxing massage and to exchange cuddles!

Read also: Baby cuddles leave their mark on the genes

Children with atopic dermatitis have a less efficient skin barrier in the face of aggression from external agents, so you should avoid exposing them to substances that can irritate their sensitive skin.

"At home, for example, we limit exposure to dust, using anti-mite pillows and mattress covers for your bed and eliminating rugs, stuffing and soft toys" advises Prof. Patrizi.
"We avoid making children practice physical activity in places where there is dirt or tall grass, which, by running and jumping, cause dust and pollen to rise and deposit on the skin and irritate it, even more so if it is sweaty".
For clothing, choose soft clothing made from natural fibers, such as cotton, because rubbing of clothing against the skin can be a trigger of eczema. "Likewise, when we hold the baby in our arms, we parents are the first to avoid wearing wool sweaters or other irritating fabrics" adds the dermatologist. And we try not to cover it too much, because sweat makes eczema worse.
For the laundry, we wash all new items of clothing before putting them on the child, taking care not to overdo the use of detergents and to rinse them thoroughly.

Take them to the beach in the summer

"It has been seen that exposure to the sun of the summer climate and swimming in the sea have a very beneficial effect on atopic skin, so if possible, we try to let the child spend long periods in a seaside resort" highlights Annalisa Patrizi . "The important thing is the disease both in a phase of remission and on the skin there are no lesions. For this purpose it is advisable to do a drug therapy with anti-inflammatory products before leaving, so that during the holiday period your skin is healthy. And can enjoy all the benefits of the marine climate without inconvenience ".

TAG:
The importance of vitamin D and K in infants ❯

add a comment of The importance of routine in atopic children