The importance of the game to "learn" emotions 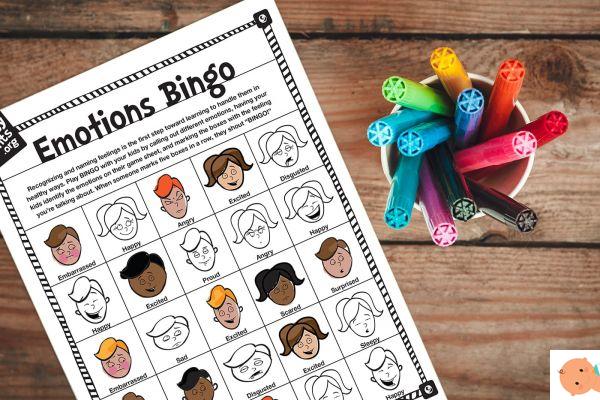 Fun, enthusiasm, excitement, but also worry, fear, sometimes even boredom: there is no game that is not accompanied by one or (more often) more emotions.

"On the other hand, play, which always represents some small fragment of 'human comedy', is precisely the means by which children learn to explore and know the world, and therefore their own and other people's emotions". Word of Di Pietro, a playful pedagogist, to whom mymodernparents.com asked to illustrate some fundamental aspects of the relationship between play and emotion, starting from an analysis of the most common playful activities of childhood.

I play for two, with mum and dad

"Let's think of the games that parents play with their young children, such as the pony on their knees, the clapping, the stories with their fingers" says Di Pietro, who is also president of the research group on the game of the Cemea, Centers of practice in the methods of active education. “They are games that are played 'face to face', in close physical contact, and in which one experiences a form of communication based on each player's ability to listen to emotions of the other ".

"If mom and dad modulate their behavior in tune with the


emotional reactions of the child, for example by stopping the hops on their knees if they 'feel' tense and elusive, or by intensifying them if they see them laughing enthusiastically, what happens reinforces a relationship based on listening to emotions. Being aware of the importance of emotional dialogue between adults and children during games for two can be a good example for a child to put into practice even in contexts other than playful ones ".

Another example is the symbolic game, one of the most played by children up to five / six years old, in which the child can also decide which emotion to stage and in which role to play. "Sometimes - says Di Pietro - they stage themselves: let's say that I was the child and you (to the mother) my mother, or let's say that I was the little sister and you (to the big brother) the big brother . In this way they can retrace the emotions they felt in particular situations, perhaps anger during a quarrel, or jealousy for their newborn brother, or the joy of a gift ".

"Other times in this 'pretending to ...' children play to put themselves in the shoes of others: let's say that I was the teacher, that I was the dad, and during the game it can happen to be sad or happy dad, the teacher angry or serene ". Even if it may seem simple from the outside, it is a very complex exercise in exploration of the emotional universe, in which the child, by imitating, formulates his own interpretations and personalizations of situations and events that he may have experienced or imagined .

Emotions often explored with these fictions they are very strong, but the fact of getting to "touch them" in a frame that is that of the game, which can be broken at any time, helps not to get too involved. If the involvement does come anyway - for example when the child who plays at being angry gets really angry, or the child who is playing the sheep chased by the wolf-grandfather begins to get frightened in earnest - just stop the game to regain control.

Often children are overwhelmed by strong feelings which they cannot give a name or an explanation. This is why it is so important to get the little ones used to recognizing emotions. A...

Cuckoo and hide and seek

Hide and seek is also one of the most popular games, and it is for a long phase of life: children begin to experience it from very young, starting with the "Cuckoo / Bubù settete" (where the adult hides his face), and they can do it until adolescence. "Here the emotion most at stake may be related to one of the greatest fears that one can experience, that of being abandoned, of being alone".

"Children love to 'touch' this fear through play, because the playful dimension helps to 'manage' such a strong emotion", explains the pedagogist. And when the fear becomes too strong, strategies can be put in place to get out. from the game: “Let's think of the child around two years old who calls his mother from his hiding place for fear of never being found, or he always hides in the usual place, or comes out after a few minutes”.

The importance of the "emotional climate"

The emotions called into question by the game are not only those directly evoked by the game itself, but also those related to the way in which each individual child lives it individually, also based on their own life story, and in relation to others.

Hopping on daddy's lap should arouse joy, but it can provoke impatience if the child doesn't feel like it at that moment. Pretending to be afraid can result in real fear, and any game that involves winners and winners, or a performance (singing, drawing or exercising), can generate disappointment and frustration in the child who is leaking or who does not feel up to par.

Read also: How to teach the ABCs of emotions to children

Even this within certain limits "is part of the game". The important thing is that the participants - starting with the parents, when they are there - always try to maintain an adequate, playful emotional climate.

"If the question is how can we help children to explore emotions through play, the first thing to do is to start from the awareness that there are games that can arouse some more than others, where children stage them or put their face to face. to face 'the emotions of the child with those of the adult. So it should to consider conducted games as equally important as autonomous ones".

“Playful emotions (those that are experienced in play and for play) allow you to remember an experience in a positive way even if it did not go exactly as you wanted. Not surprisingly, if a game where everything goes wrong takes place in a serene and positive playful atmosphere, that game will still be redone. "If, on the other hand, there are criticisms, judgments, negative comments, and so on, the motivation to try again decreases. This is also true in contexts other than that of the game.

"Let's try to imagine what it can mean to educate (and teach) with a playful attitude (even if we're not playing a game). For example: even an inevitable mistake can be faced with a smile. Or at least away from an emotional climate weighed down by (pre) judgment and a sense of guilt. When there is a fear of making mistakes in children, the motivation to try again decreases. In the face of a judgmental, punitive climate that frightens anyone who would freeze himself ".

Read also: Quiet and predictable moments to spend with children: this is how important they are for their development

TAG:
The importance of sleep in children: 8 things to know ❯