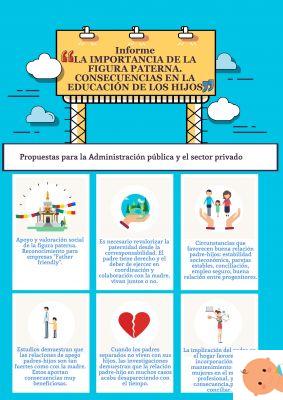 It has always been believed that the primacy of a parent attentive to the needs of the child was linked to maternal exclusivity. Since the dawn of time the father used to take care of the external chores to the house and to the mother, instead it was the housework and the care of the children. He was feared and also had a hierarchical superiority over his wife and with this conviction the children grew up: the boys would have to think about studying, looking for a good job and supporting the family, while a basic education was enough for the woman, simple jobs that didn't take too long to take care of household tasks.

However, times have fortunately changed and pedagogy and psychology have dedicated important studies and research to the father figure on how much the presence not only physical, but also educational is fundamental for the correct development of children. In fact, there are many fathers who take care of their children from birth, but not only. Many also worry about their partner's pregnancy and actively participate in various medical examinations. There is no denying that we no longer have a man dedicated to work and to bring the salary home, but he is fully inserted in his role as a father.

The educational choices, it is fair to say, must be shared by the couple, it is important for the child to have two parents who think the same way so as not to create misunderstandings and confusion. Establishing rules right away helps the couple to maintain that balance and the children to have a solid foundation on which to refer.

The role of the father as the child grows

Obviously, the presence of the father changes as the child grows. If it is normal, and at the same time natural, a certain mother-child dyad in the very first months of life in which the mother and the child are in perfect symbiosis and the father can do little, growing up you go to outline the personality of the child and the approach with other educational figures is extremely fundamental. This is where the father figure comes into play.

Various studies now state that the presence or absence of the father already at the moment of breastfeeding can create serenity or anxiety and tension in the woman who in turn pours into the child.

It is therefore important not to underestimate the climate that is lived within the family for the tranquility of children, everything passes from parents to children, especially moods and emotions.

With the development of language begins the real exchange between father and son, if before the communication was based on smiles and looks, now you can exchange short and simple opinions. What creates a fundamental bond in the relationship with the adult is play.

Through play, children best express their personality and way of being, educational exchanges are created and imagination is a valid ally. Often adults are too busy with their commitments and especially in the evening they dedicate little time to the child who is waiting for the return home of the parent to be able to play together. It would be a good habit, despite the tiredness of the day just passed, interact with children, even if only for a short time, but make them feel our presence and share such an important moment with them he fosters that bond of attachment so dear to Bowlby (John Bowlby was a British psychoanalyst and is considered the father of attachment theory).


A brief reflection should also be made regarding the paternal instinct. If the maternal one turns out to be an innate characteristic of the woman, one thinks differently for the paternal one. Some scholars are of the opinion that the paternity is formed with the birth of the child, therefore a man would not have the instinct towards parenthood, but it is being created day by day by establishing a bond with the child. If so, a fortiori the father should live its role right away to be able to accompany the child in his moral and social growth. Since the teaching that can be given to a child has always been the example, children can be compared to sponges and mirrors, in the first case they absorb everything that revolves around in positive and negative and in turn reflect outside. what the parents are.

At school age, educational figures have the delicate task of laying the foundations for a correct civil life with themselves and others. Children relate to peers, the first friendships and the first discussions are born. What they learn at home on a relational level they pass on to the outside world. If the family lives in a serene and cordial atmosphere where all the members work together and respect each other automatically, the child brings this serenity back out of the home, if, on the other hand, the parents usually argue, if an inappropriate language is used and the respect for the neighbor it is easy to think what kind of emotions the child would bring back in coexistence with peers. At this stage, the educational role of the father is extremely important.

As children grow up and enter pre-adolescence first and adolescence then, if solid educational foundations have been established, the children would have no difficulty in relating with others, showing respect and collaboration. In a society where arrogance reigns supreme and asking for everything immediately contrasts with that healthy education that should instead be given, the role of the father must not be that of spectator but of protagonist together with the mother to impart the right teachings. In this delicate phase of children's growth, being a "friend" certainly does not help.

In fact, a mixing of roles in a period in which conflicting emotions are experienced between the changing body and the mind that is still a little child, between the desire for independence and attachment to the family. The parent, on the other hand, has the task of accompanying the child in growth by imparting the right rules, making it clear that even in the distance the father and mother will be next to it, but that the children must take flight.

To learn more: how to be a good dad


Chiara Mancarella is a Clinical Pedagogist enrolled in ANPEC (National Association of Clinical Pedagogues) and primary school teacher. She is an expert in DSA and management of school and training conflicts, she has followed several courses on bullying and cyberbullying. She will soon be publishing her book "Dear parents, wake up! Notes of a clinical educator" on education, relationship, quiet family life, school.

TAG:
The importance of being with friends. Since childhood ❯

Depression: when it affects dads

Stress: a survival manual for dad

How to be a good dad today

The 20 ways to become a good dad