The most original names of baby VIPs 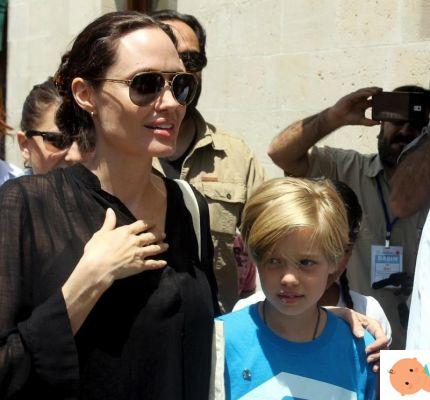 VIPs have always shown great imagination (and sometimes even humor) with the names to give to their heirs.

Just to mention the most striking examples, such as forgetting to Harper Seven (the latest addition to the Beckham family), by Bansk Violet (daughter of actress Hilary Duff) of Bluebell Madonna (Geri Halliwell's baby), di Apple (firstborn of Gwyneth Paltrow and Chris Martin) e Fuchsia (daughter of Sting), as well as of Lourdes (destined to become the heir of mother Madonna) e Sunday Rose (daughter of Nicole Kidman and her husband Keith Urban).


But that's not all: Bradley Cooper and Irina Shayk's daughter is called Lea of ​​Seine, while the name of the baby girl of the actor Tobey Maguire is Ruby Sweetheart. Instead, Beyoncé and Jay-Z's twins are called Rumi e Sir. And there are so many others ... Kayne West and Kim Kardashian named their children North, Saint and Chicago. And he just came into the family too Psalm, fourth child and second had with a rented uterus.

Michael Bublè has chosen a truly evocative name for the third daughter, Life. The little girl arrived at a time of rebirth of the Bublè family, after the discovery of the illness of their son Noah.

The names of the children of VIPs in Del Paese

There is no shortage of famous examples with regards to the country. Showgirl Michelle Hunziker chose the names Aurora, Sole and Celeste for his daughters. Naike Rivelli, daughter of Ornella Muti, called her son Akash, name that derives from the Sanskrit.


The daughter of actress Anna Falchi and entrepreneur Denny Montesi is called Alyssa, while the (ex) couple Briatore-Gregoraci chose the double name for their son Nathan Falco. The names of the children of John Elkann and Lavinia Borromeo? Ocean and lion. Lion, is also the name of the son of Chiara Ferragni and Fedez.

Brigitte Nielsen, mom at 54, chose to call her daughter instead Frida.

WATCH THE PHOTO GALLERY WITH THE MOST ORIGINAL VIP NAMES:

The most original names of baby VIPs

The VIPs continue to show off great imagination (and sometimes even humor) with the names to give to their heirs. From the names of Beyoncé's twins, Rumi and Sir, to that of the daughter of the ex ...

YOU MAY ALSO BE INTERESTED IN: Top 100 Parents' Favorite Baby Names from MyModernParents.com

Do you have to choose the name for your baby on the way? CONSULT THE DICTIONARY OF ONLINE NAMES

TAG:
Do dads spend too much time in the bathroom? ❯

add a comment of The most original names of baby VIPs