The ninth month of the newborn 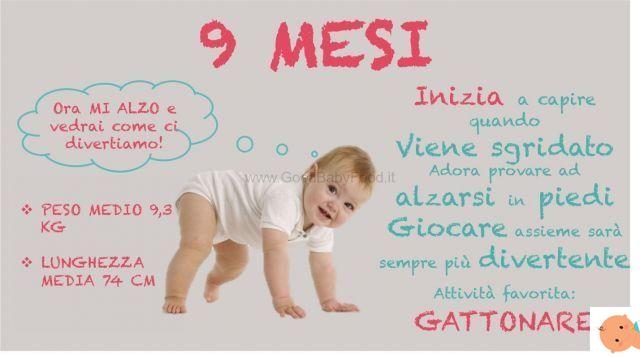 Ninth month of the newborn

I nine months of life are the era in which it is already possible to get a clear idea of ​​how the child is developing under the psychomotor profile, which includes intellectual progress combined with the ability to perform and coordinate movements to achieve specific goals (grasping, move around, find out where a sound comes from, and so on).

Steps towards the first steps

By this age he may already have reached a number of skills, first of all sitting with your back straight, moving your torso forward if necessary to take a toy placed at a certain distance. In some cases it is already possible that Tomcats (or smears) and in others it may already be able to use the spoon on its own with very few accidents along the way. From this moment on it becomes, if possible, even more important to allow him to carry out all the movements of which he is gradually more and more master - grabbing, moving, lifting, turning - without, however, exerting pressure or expecting him to reach goals for which he is not ready yet. In fact, for every single child there is a "right moment" that must be able to arrive without external forcing which, moreover, would prove to be more harmful than useful.

Il milestone of the first steps is considered the most important along the path that leads toautonomy. And if on the one hand it is understandable that we tend to consider it the most striking proof of a harmonic psychophysical development, on the other it is more than fair to also be pleased with the previous progress, first of all the control of the head, which constitute the best premise.

To make sure that everything is going well with it psychomotor development comparisons must therefore be made not between the child and his peers (as is often done) but between the child and what he is able to accomplish day after day, continually surpassing himself. Here are the main stages that lead to walking: what matters is that gradually the child, while skipping some of them, reaches the next goal up to the first steps.

The goals of the ninth month

Extend your arms towards the people you want to get caught by, even leaning your torso forward.

Exceptionally it could respond adequately to a whole series of commands (Catch the ball! Clap your hands!) And perform the imitation of the animals' cry.

What to do if she doesn't crawl

Crawling, crawling, advancing in support on the buttocks is the first way in which the human cub begins to move in the environment. Usually the child begins to do it two to three months before the birthday, but there are children who do not go through this stage, even if they start walking at 12 months, which is the average time of the first steps.

However, this can be favored activities in a playful way, thus combining useful (making him do some active movement) with pleasure (having fun through a physical exercise that is equivalent to a game). To do this, you can place him on the ground on a four-legged carpet, and then sit on the ground in front of him at a short distance.

At this point you have to spread your arms and call him over and over by name, saying "come!" with an affectionate tone, without imperious accents. In the event that he demonstrates that he wants to collaborate by starting to move forward, you have to praise him with conviction over and over again, and then hug him, if he ever manages to make the entire journey. Always for "train it"you can often extend your hands to him, to invite him to stand up while holding on.

In no case should you insist, if you do not like these initiatives or, worse, you start to cry. Any forcing is counterproductive, always in the light of the aforementioned "right individual moment", which must be awaited with patience and trust, to the benefit of the psychophysical well-being of the child.

First shoes, yes or no

The clothing industry dedicated to early childhood has for several years been offering infinite types of shoes intended for the first months of life or, in any case, for the period preceding the first steps on the ground. In reality shoes are not necessary until the child learns to walk so the choice to make them wear them is only aesthetic.

At home it is advisable to leave it with the free feet, covered in soft socks, when the outside temperature suggests otherwise naked. The right shoes for walking, to put on starting from the first steps, must only serve to protect the foot from the trauma that it could receive by hitting stones and sharp objects.

They must have the flexible sole, to allow the foot to make a large movement and, consequently, to strengthen and should have a mild support function of the ankle, the only part of the foot that may need to be supported. At home, if the floor is covered with wood or carpet, the child can remain barefoot even when walking.

The walker does not enjoy the approval of specialists, even if in fact most children appreciate the freedom to move around the house it provides. In fact and unlike what is generally believed, it does not favor the possibility of walking earlier but, on the contrary, it can be an obstacle to correct psychomotor development.

The first accusation leveled against him is that he is an impediment in relation to the ability to "fall well", which when the child learns to walk is very important in order not to get hurt. Furthermore, it can prevent the child from acquiring the perception of his own motor limits. Finally, it has been noted that the child accustomed to the walker tends to walk on tiptoes more often, to the disadvantage of the ability to maintain balance in an upright position.

Read also: The baby walker: yes or no?

At nine months we may have to face some rather common ailments such as the first allergies and febrile convulsions.

L'allergy to dust mites, almost invisible insects that nestle precisely where there is dirt, can manifest themselves with more or less severe symptoms ranging from simple sneezing with mucus coming out of the nose, to tearing and redness of the eyes, to dermatitis with itching up to more fearful asthma attacks. The latter are characterized by an important breathing difficulty due to the sudden narrowing of the bronchi.

Destined to cause much fear in parents, febrile convulsions are a consequence of the sudden onset of high fever. They affect about 5 per cent of children aged between six months and four years of age and are favored by family. The symptoms are unmistakable: the child is suddenly shaken by jerking tremors, then faints, sometimes uttering very slight moans. In some cases he can roll his eyes backwards, without this being a sign of greater seriousness of the episode. The seizure typically lasts 1-2 minutes in all.

From the ninth month onwards, every evening it is necessary to make sure that the strips of bumper fabric, used to cover the bars of the bed, are well stretched and do not have any depressions. The risk to be eliminated is what the child learns at any moment prop up against any improvised steps accidentally created by the fabric and then try to throw yourself out of the bed.

If the little one is particularly lively and there is a real danger that he will still be able to somehow to climb along the sides of the bed, and then throw yourself on the floor, it may be appropriate to replace the normal bed with a "camping" model, chosen from those with very high sides compared to the bottom, therefore impossible to climb.

Il box, possibly adopted up to this moment, should no longer be used from 9-10 months as it is an obstacle to the possibility of learning to move in the environment, propping up on the bottom or proceeding on all fours. From 9-10 months the ideal place to keep the baby when he is awake is a soft fabric carpet, or in any case with very short pile and easy to wash in the washing machine.

If there is parquet there is no need for anything. The box can instead be used (if there is enough space) as a container for toys. It is possible, although not too often, that the child asks himself to come back for a few minutes, as he is attracted by the toys: in this case he must be satisfied, but removed immediately after the first signal of protest.

TAG:
Does our name affect how we look? ❯

add a comment of The ninth month of the newborn