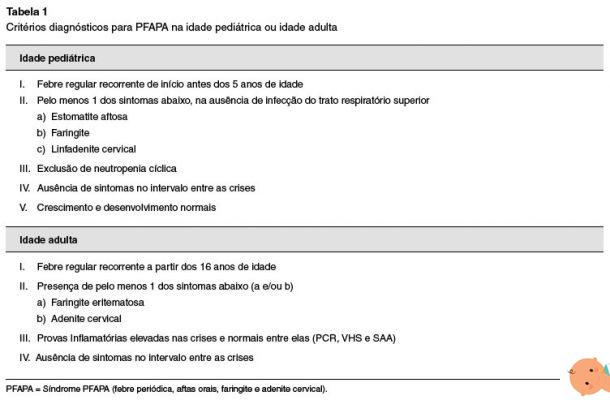 Periodic fever PFAPA was described for the first time in 1987 by the American pediatrician Marshall and takes its name from the English acronym which stands for Periodic Fever, Aphthous stomatitis, Pharyngitis, cervical Adenitis and which in Del Paeseno means periodic fever, aphthous stomatitis, pharyngitis and cervical adenopathy. It's about a benign condition which is characterized by episodes that occur cyclically every 2-4 weeks with high fever, pharyngotonsillitis, canker sores and cervical adenopathy lasting about 4-5 days.

Periodic PFAPA fever typically it disappears spontaneously within 6 years of age, it does not interfere with the growth of children and above all it does not lead to long-term complications.

What are the causes of PFAPA Syndrome?

The PFAPA falls under the autoinflammatory syndromes, that is, pathologies characterized by episodes of generalized inflammation. More precisely, the immune system is activated without there being a real aggression and determines an inflammatory state that gives rise to fever and other characteristic symptoms of PFAPA. It is not an infectious disease, and in fact no infectious agent can be recognized during attacks. What causes PFAPA, at the moment, nobody knows. Fortunately, however, we know that it is a benign condition.

Read also: My child has PFAPA, a rare syndrome

PFAPA: the most common symptoms

The main symptom of the PFAPA Syndrome is definitely the fever recurring that can be also very high and reach 40-41 ° C. Fever is defined periodic precisely because it tends to recur approximately every 4 weeks. The time interval between one manifestation and another is generally very precise, so much so that parents should be able to predict more or less the day when the fever will return.

Not all children have complete PFAPA syndrome, some, for example, may also have lighter forms of PFAPA or in which some symptoms are absent, while other children may experience additional symptoms such as fatigue, muscle and / or joint pain, nausea, vomiting and diarrhea.

In the intervals that separate one episode from the next children are in excellent health and perform all normal daily activities.

Read also: My daughter has Pfapa and almost every four weeks she has a fever

To make the diagnosis of PFAPA it is essential to evaluate the symptoms and the actual frequency of the episodes. In this sense it is very useful to draw up a diary in which parents record when the child has a fever, how many days it lasts, what temperature it reaches and all other symptoms such as sore throat, canker sores or plaques.

There is no specific laboratory test that can confirm the diagnosis, but some tests can be done for exclude other pathologies which can give similar symptoms such as clinical neutropenia or other autoinflammatory syndromes. For example, in the presence of pharyngotonsillitis it may be useful to perform a pharyngo-tonsillar swab in order to rule out a group A beta-haemolytic streptococcal infection.

Blood tests can also guide doctors in the diagnosis because children with PFAPA, during febrile episodes, have high values ​​of white blood cells that normalize during the period in which the children are well.

The treatment of PFAPA: paracetamol, ibuprofen and a lot of patience

Unfortunately, in the case of the PFAPA Syndrome there is no definitive cure and the recommended therapy is therefore only symptomatic in nature, aimed at relieving symptoms. To combat fever, always with the prescription of your doctor, they can be used antipyretics and anti-inflammatories such as paracetamol and ibuprofen, to be dosed appropriately according to the weight of the child and according to the route of administration. Ibuprofen, in particular, can be very useful because in addition to lowering fever it also acts on inflammation, thus also reducing other annoyances.

No categorical, however, to acetylsalicylic acid, or the classic aspirin, which should never be given to children. In the case of PFAPA syndrome, antibiotics are also useless as it is not a bacterial infection.

If the pediatric rheumatologist deems it necessary, it can be administered a dose of cortisone which makes the fever disappear very quickly. This particular event is often used by doctors as a confirmation criterion for the diagnosis of PFAPA. On the other hand, however, the use of cortisone cannot become "routine" because you risk running into one rapprochement of febrile episodes.

Read also: Children and drugs: when to use ibuprofen and paracetamol

Finally, a bit 'as a last resort, it can also be evaluated surgical removal of the tonsils. The intervention, however, according to the guidelines of the Istituto Superiore di Sanità, should be considered only in the rare cases of very frequent and close febrile episodes that have important consequences on the quality of life of the child.

How is the life of children with PFAPA syndrome?

As we said above, in the intervals that separate one episode from the next, children are in excellent health, they can safely go to school and play sports.

Theoretically, children who still have the Syndrome at the age of six could go to school even during febrile episodes, just because they do not risk infecting anyone, but the fever could weaken them too much and make attendance impossible.

Surely there must be a dialogue with the school so that periodic absences do not affect too much on the child's learning.

La prognosis of the disease, in any case, is really very good because febrile episodes tend to disappear by the age of 6 in a completely spontaneous way and without any adverse effect on growth.

TAG:
The story of the Siamese twins Lydia and Maya. Separate after 8 days of life ❯

add a comment of The PFAPA syndrome: everything you need to know about relapsing fever