The rules for a good fight as a couple 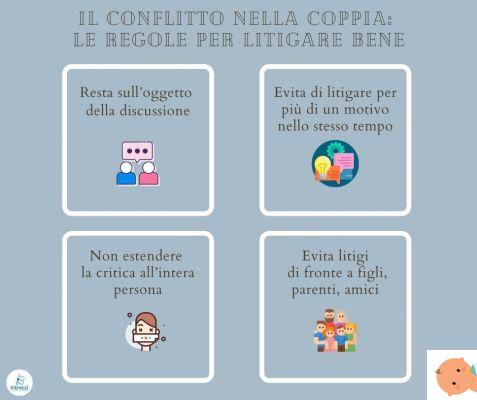 “The subject of quarrels between mum and dad is a taboo: you always have to pretend that everything is fine. But the reality is that, absurdly, one can go through life without working or without voting, but one cannot avoid arguing ". The speaker is the educator Daniele Novara, the founder of the CPP - Psycho-pedagogical center for education and conflict management that on the subject of couple quarrels has just written a book “Meglio dirsele” (Bur). The problem is that there is confusion about the meaning of the word "quarrel": "Quarrel or conflict are words that in common opinion are ugly and unpleasant, and are used as a container where the most unpleasant experiences in life converge, such as violence or war ”continues Novara. “Just think of the headlines and television news. This improper use contributes to making a very normal experience of human life a kind of tragedy ”.

HOW TO LITIGATE IN A CONSTRUCTIVE WAY: A COMPETENCE THAT MUST BE LEARNED

The focal point to clarify, before thinking about how to fight well, is to understand what we are actually talking about: “In the collective imagination, the genesis of violence is quarrels: the right thing to do would therefore be not to fight. This way of thinking is very wrong, because it prevents you from building a competence. It would be like saying "since you can drown in water, then you don't really enter the sea". If you swim without any water it is obviously dangerous, but you can learn to swim in small steps. The same goes for the quarrel: it is a skill that must be acquired".

Read also: How to handle an emperor child

But when does a conflict occur? “When there is an unpredictability or one divergence in mutual expectations, a discrepancy between what one of the two spouses imagined in relation to the actions of the other and the reality of the facts ". An example? “I thought you were going to pick up the kids from school! Your incapacities fall on the family! " or "I thought you were shopping before I went home, I always have to do everything myself!". Situations such as those described above must be handled especially if they occur in front of children, because children and young people learn from their parents.

Read also: Seven lies that were told to parents: let's dispel them

HOW TO LITIGATE IN PAIRS

The right thing to do is therefore try to quarrel between parents so that their children learn how to: “The beauty of conflictual learning is that it allows you to respect yourself and others at the same time, in the search for a common interest”.

Here is a series of steps to be respected to favor the success of the conflict according to the indications of Dr. Novara.

1 - DO NOT ATTACK THE PERSON

“Never attack the other but try to stay on the contingent problem: when you attack the person, that person tends to defend himself and the problem is buried. The conflict is not managed by bringing out the personal aspects, but by seeking a solution to contingent facts. If the dinner is not ready it is not because one of the two neglects the family: rather let's try to prepare it together ”. Or to order a pizza.

2 - DO NOT TAKE EVERYTHING THAT IS SAID FROM THE LETTER

“We must never take the contents of the communication literally: when there is an ongoing conflict, we tend to emphasize everything. For example, "this year I am not going on vacation, you exasperated me, you go alone" ": it is obviously a statement dictated by a moment of anger, which should not be taken at face value and should not be countered".

3 - DO NOT GIVE ADVICE BUT ASK "MAIEUTICAL" QUESTIONS

In the conflict, it is not useful to make observations and give judgments or advice (“You should do it this way to be more orderly”) but it is a good idea to ask knowledge questions: “How can we organize ourselves today with the children that the babysitter is sick? " “If we want to go to the professors for an interview together, which day shall we choose?”. These are maieutic, legitimate questions that denote an interest in the other ”.

People need to be listened to, especially in emotional moments such as quarrels. “If children see that parents have different ideas but listen to each other without interrupting irony or sarcasm, they understand that they can have different ideas without this becoming a threat. We must listen to the respective reasons and consider points of view different from ours. Making comments or interrupting is a way of not giving importance to what the other is saying ”.

Especially if we realize that there could be a tantrum, taking time is essential. “In the conflict, one's emotions must be contained because the painful keys of childhood could be activated:“ Do as my father, who never listened to me ”. Before answering, one should count to thirty. Nor should we seek the culprit, or set up a court: the ideal would be to make proposals rather than give orders. For example "this year I will take the children to the swimming course": it is an assist to the other to do his part ".

Read also: Teenage children: the rules to give (and not the commands) THE CONFERENCE ON OCTOBER 12
“Neither good nor bad” To hear Daniele Novara live, you can participate in the conference on 12 October in our city: “This is a great opportunity to free yourself from the mythologies of the conflict. The anthropological mutation towards narcissism that our society is going through has increased the conflict: everyone wants to impose themselves on the other but we must learn to find common interests. It is not a question of becoming better or more evil, more docile or aggressive but of learning to find the common interest: we must help our children to fight well, to protect themselves from aggression in all its forms ". Discover the program and sign up TAG:
The worst shoes for your feet and ... pain relief ❯