The sixth month of the newborn 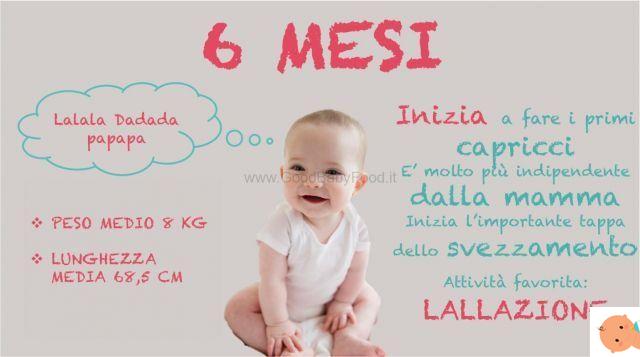 It is generally in this month that, following the indications of the World Health Organization and other national and international scientific agencies and societies, the weaning of the child begins. As always, this is not a mandatory indication: in some cases your pediatrician may recommend starting it earlier - but after the fourth month - if the child shows obvious growth difficulties. Conversely, other babies may need a few more weeks.

In general, the important thing is to observe the child. The signs that he is ready to start tasting anything other than milk (breast or formula) are:

For breastfed babies, weaning does not necessarily coincide with termination of breastfeeding. This can safely continue and if possible doing so would be ideal. According to the World Health Organization, if mothers and babies like breastfeeding, it can be continued up to the age of two and beyond: an opinion also shared by our Ministry of Health.

In the event that you decide to stop, the indication is not to switch immediately to cow's milk, but to opt for specific formulas for this period of life.

Read also: Milk for babies before 12 months: why avoid the vaccine

Weaning, how to start

There are currently two schools of thought with respect to the type of diet to be proposed to the child for weaning: traditional weaning, with baby food (even if there are no more rigid schemes than once) e self-weaning or complementary feeding on request.

There are no scientific studies that compare the two proposals: if parents are attentive and scrupulous with respect to the quality (and quantity) of the foods to be offered to the child, there should be no problems in either case and a child who grows regularly and he shows himself serene and active will confirm this.

Traditional weaning: with baby food, but without rigid schemes

"The child he is not a small adult and has different nutritional needs than adults. For example needs more fat, which serve him for an optimal development of the nervous system, and of poche proteins, because an excess of these nutrients in the first two years of life is associated with an increased risk of developing childhood obesity, "pediatrician Margherita Caroli explained to mymodernparents.com. For these reasons Caroli, like other pediatricians, believes it is appropriate provide for weaning and for the first years of the child's life a specific diet. Without the rigid schemes of the past, but in any case with a certain gradualness to accustom the child to the novelty of flavors and textures.

The dogma of introducing food in stages to avoid the risk of allergies has fallen, the new trend that is gaining momentum in families and among pediatricians is that ofself-weaning or complementary feeding on request. There are two fundamental principles of this approach.

In order for weaning not to create problems, mum and dad must be the first to eat healthily, to be inspired by the Mediterranean diet. Precisely because this is not always the case, some pediatricians advise against it.

If he doesn't want to eat

There can be various reasons why a small child will not eat at some point. Here are those listed by the Ligurian pediatrician Alberto Ferrando in his book How to feed my son.

Until a few years ago it was thought that the best way to prevent food allergies in children was to delay as much as possible the introduction of potentially allergenic foods (fish, eggs, strawberries, tomatoes, dried fruit) in their diet.

The results of a growing number of scientific studies have led to questioning this belief and today the recommendations have changed radically. There is no scientific evidence that delaying the introduction of allergenic foods beyond six months reduces the risk of developing food allergies or other atopic conditions such as eczema, allergic rhinitis or asthma.

In other words: there is no need to follow particular and rigid schemes but the various foods can be introduced according to the preferences of the family and the child. Obviously this does not mean that from six months on, the baby must be "gorged" with allergenic foods one after the other: however, the principle of respecting a certain graduality in the proposals is valid, simply to accustom the baby to new flavors and new textures.

Read also: Egg protein allergy: what it is and how to behave

More frequent discharges than usual and liquid stools, perhaps with an acidic and intense odor and presence of mucus: most likely these symptoms indicate that aintestinal infection. The most common culprits are particular microorganisms - first of all the rotavirus, followed by norovirus and there are cases caused by bacteria (Salmonella and Campylobacter) - which can reach the intestine through contaminated food or even just dirty hands.

If the discharges aren't too frequent anyway, that's enough administer oral rehydration solution to replenish the body's salt and sugar reserves, reducing the risk of dehydration. While on the one hand you need to give your child a drink often, on the other you can safely respect her refusal to eat. The breastfed baby can continue to feed as often as usual and does not need to drink water.

You need to go to the doctor or directly to the emergency room (because the risk of dehydration is high) if:

In correspondence with the introduction of the first complementary foods, the child could manifest constipation. In fact, in childhood there are no absolute parameters to be able to talk about constipation; to do this it is necessary to take into account the frequency of the evacuations but also the consistency of stool and fecal continence.

The main signs of constipation in babies are:

If the child has already started a solid food diet, you can make your diet richer in fiber, increasing the amount of vegetables and fruit and increasing the intake of liquids: kiwis are very useful in this sense.

If the child shows difficulty in evacuation, you can try to help him with micro-enemas based on honey and emollient substances and if this is not enough, the pediatrician could evaluate the opportunity to prescribe the so-called fecal softeners, which have the ability to incorporate water and increase fecal volume.

The goals of the sixth month

Every child has his own time frame and conquering a certain competence a little earlier or a little later means nothing to general respect. It is true, however, that there are stages of development and knowing broadly what to expect can help to understand if there is any problem.

Between the fifth and seventh month of life, in general, children begin to control head and trunk well, to sit with or without support, to get on their side and roll, to grab objects, both with the right and the left, and to bring them to the mouth. And again: they are interested in family events, they become more and more expressive (and hilarious!), They begin to behave differently than usual when they are in new environments or with strangers, in addition to emitting vocalizations and warbling they begin the lallation.

If between five and seven months a baby:

TAG:
The seventh month of the newborn ❯

add a comment of The sixth month of the newborn