The stages of the child's development, from birth to 6 years 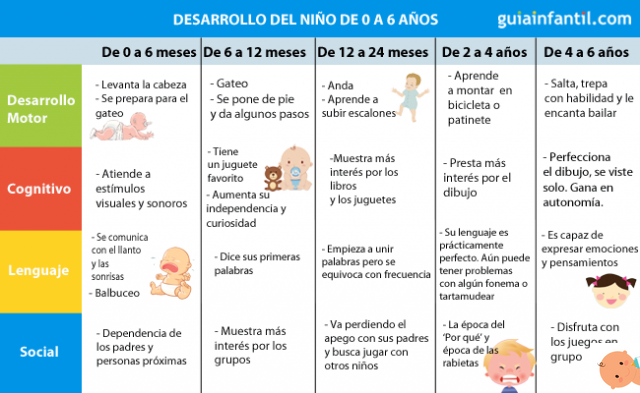 The stages of the child's development

When a baby arrives, parents wonder what to expect from his growth: when they see it smile for the first time, when will he say the first words when will begin to walk. Obviously there are no "fixed moments" in which certain things must happen: there is not a precise month in which all children must learn to walk or hold the spoon.

Indeed, experience tells us that there are children who walk at 10 months, while others at 15 do not yet. That some begin the first tests without a diaper around the age of two, others arrive a year later. AND experts reassure: every child has his own times, and gaining a certain skill a little earlier or a little later does not affect overall development.

Having said that, however, it is equally true that there are precise ones growth stages: time intervals in which children tend to acquire certain skills. Here then is one indicative scheme of these phases, divided by different abilities (motor, language, relationship and cognitive).

If the child has any small anomalies with respect to this pattern, in general there is no need to worry: it can be one normal individual variability. However, if you do not feel safe, it is better not to be left with the doubt: that's enough consult your pediatrician, who will be able to assess the situation and advise on what to do. At the end of the article you will find the indication of the scientific sources for the development of this table.

The development of the child from one to two years

From one to two years: how much progress! The child learns to walk, to say the first words, to make speeches .... also to establish the first friendships. He becomes a little adventurer to discover ...

Read also: Pediatrician, how to choose the right one

The development of the baby from 0 to 3 months

Read also: How tall will your child be

The development of the child at 18-24 months

Read also: The importance of the game to "learn" emotions

The development of the child at 30-36 months

Read also: How to teach children to ride a bike in 7 steps

The development of the child from two to three years

What progress! Do I remember his first steps? Now the baby walks safely on his legs. And the first word of him? At the age of two he is already able to tell about 150. Find out all the stages ...

The development of the child at 3,5-4 years

The development of the child at 4-6 years

material on the growth of the Ministry of Health;

How many months do babies smile at?

The baby's reflex smile normally disappears at 2 months, and its first true appearance will appear between one and a half months and 3 months (or 6 - 12 weeks) of life.

When does the child say the first words?

Starting from one year of age, the production of the first words begins, up to the age of 2, when the child should be able to produce between 50 and 80 words.

At what age can you start removing the diaper?

The diaper should be removed when the time is right! Generally this moment coincides with 2 years for girls and 3 years for boys. Children need to understand what they need to do when they feel a full bladder.

add a comment of The stages of the child's development, from birth to 6 years