The stages to start walking 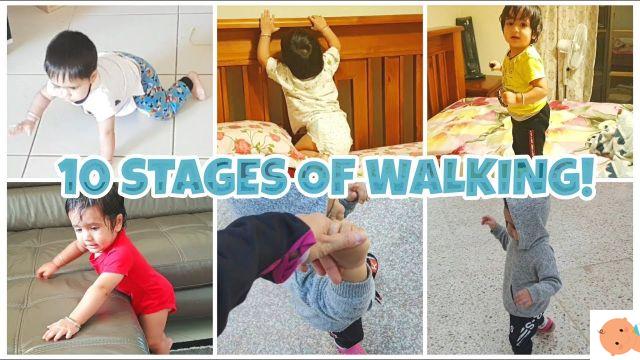 They start walking at 12 months, manage to climb stairs supporting themselves at 18 months and run well at 2 years. Generally. Because the age at which these milestones are reached it can vary considerably from girl to girl.

One thing is certain though: the first steps are a highly anticipated stage for mum and dad, an important milestone along the path that leads to autonomy. And if on the one hand it is understandable that we tend to consider it the most striking proof of a harmonic psychophysical development, on the other it is more than fair to also be pleased with the previous progress, first of all the control of the head, which constitute the best premise.

But in order not to burden themselves with unnecessary anxieties and worries relating to the psychomotor development of their son or daughter, comparisons with his peers are banned (as is often done).

Here are the main stages that lead to walking, although, of course, it is not possible to predict exactly when a child will acquire a given ability. Therefore slight delays from the achievements expected during growth and indicated here should not cause alarm.

In this regard, we recall the importance of periodic visits to the family pediatrician to make health assessments: it is the occasion in which the pediatrician evaluates all the appropriate parameters with respect to the age of the child.

Read also: How much should the baby grow in the first year?

Around five months he is expected to have a good head control - that is, he must keep it straight and not dangling when held in his arms, in a vertical or sitting position - and that he rotates it to identify the origin of a sound or a voice and fold it down to observe objects placed on the ground or that they fell out of hand.

Typically at this age boys and girls they maintain control of the head when lifted, they sit with a support, roll, usually from the ventral to the dorsal position.

Read also: Fifth month of pregnancy: symptoms, emotions and visits to be made

At the end of six months he sits for a few consecutive seconds without support. Then gradually sits more and more unsupported and supports the weight on the legs when standing.

Indicatively between 6 and 9 months begins to move on all fours; some begin to go backwards, others forwards, some learn to walk without ever crawling, others drag while sitting; around 8/9 months he gets up and stands on his feet by attaching himself to the furniture.

Read also: Sixth month of pregnancy: what happens, symptoms and visits to be made

At 8 months he begins to sit without support and to bend down or lie down and then sit up again, alone. It is able to rotate on itself and to move quickly from the prone to the supine position and vice versa.

Gradually then, from nine to twelve months it acquires more and more stability by being able to sit without support, probably crawling, learning to stand up on its own and stand up without help. AND in the final phase of this stage it begins to move by leaning on furniture and objects.

At nine months old it is expected to hold the sitting position for various times, no longer staggering or accidentally slipping too many times. While sitting he grabs the toys, throws them on the ground, concentrates on them for at least a minute. He appreciates songs, shows fun when you play hide and seek with him, gets angry when he wants something that is not given to him.

Read also: Newborn Growth: When Will It Start Crawling?

Nine and ten months: he crawls!

Between 9 and 10 months there are those who start crawling, namely to move on all fours, or to move forward by moving on the bottom or by crawling one leg on the ground. But there are also those who begin to take a few steps if he is supported with both hands and shortly after he gets to stand up and remain standing alone.

The crawl stage is not compulsory and children who crawl may not walk before those who skip this stage.

At 11 months, psychomotor progress becomes very conspicuous and mainly concern walking and, more precisely, the phases that immediately precede it. Almost all children are able to stand up even starting from the lying position, sometimes simply by propping their hands on the floor, others still by clinging to the bars of the cot or the net of the playpen. After having tried and tried to stand up until this step is done with ease, the child can begin to take the first steps by leaning against the wall, furniture, sofas or holding hands. From now on he could start walking alone, without support and without asking for help from his parents, at any moment.

Read also: The eleventh month of the newborn: how to manage the first ailments

Walk leaning on furniture ("cruise step walk" or "coastal navigation") or held by the hand, may be able to take 1 or 2 steps without support, stand for a few moments at a time. And gradually he gets to walk.

The majority of children touches the milestone between 12 and 13 months, but delays with respect to the average should not worry because walking more or less early is not an indication of more or less low intelligence. It should be borne in mind that there are cautious children, who prefer to start walking when they feel very sure of their balance and the ability to manage the inevitable falls. Only in the event that he is not yet walking at 18 months, an event that is always associated with problems that are diagnosed long before the year, it is advisable to consult the pediatrician.

Read also: The development of the child in the second year of life (13 to 24 months)

CONSULTANCY of Leo Venturelli, family pediatrician, author of numerous publications on outpatient pediatrics and co-author of popular books for parents including A child is born, The great encyclopedia of the child, From 0 to 6 years, a guide for the family, Gaetano Pagnotta, formerly responsible for High Specialization in congenital and rare diseases of the Skeleton of the Bambino Gesù Pediatric Hospital of the city, and Manuele Lampasi, head of Orthopedics of the Meyer University Hospital of the city.

At how many months does the newborn start crawling?

Generally between 9 and 10 months there are those who begin to crawl, that is to move on all fours, or to move forward by moving on the bottom or even crawling one leg on the ground.

At how many months does the newborn start walking?

Most babies walk between 12 and 13 months, but delays compared to the average need not worry because walking more or less early is not an indication of more or less low intelligence.

add a comment of The stages to start walking