The story of the Siamese twins Lydia and Maya. Separate after 8 days of life 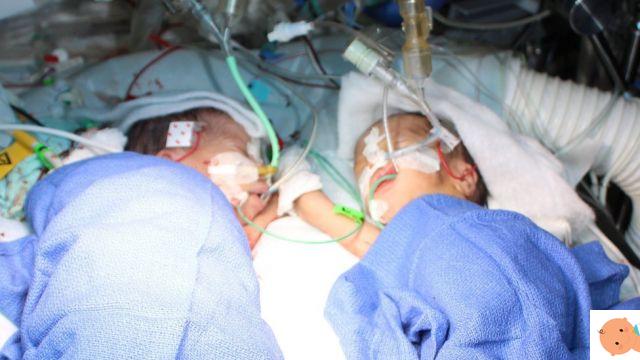 Born together with a third sister a Bern (Switzerland) last December, the two Siamese twins Lydia and Maya they seriously risked not surviving; united in the thorax, in the pericardium (the membrane that covers the heart) and in the liver, the irregular flow of blood between the two little bodies made the pressure of one sister too high and, consequently, dramatically low that of the other.

Surgery immediately appeared necessary, even if operating before three months of life is very dangerous, so much so as to make the hopes of a positive outcome drastically low (the doctors spoke of 1% chance of success). But the serious blood disorders and the low weight of the two girls, together they did not reach 2,2 kg in weight, the parents and the medical team of the hospital convinced Island to act.

THE EIGHT DAY INTERVENTION IS THE FIRST IN THE WORLD

Since the two livers were mostly fused, it was necessary to proceed with a delicate separation of the blood vessels which involved 13 medical specialists for more than five hours. In light of the encouraging success, the two girls underwent other operations to stabilize vital signs and close the abdominal walls.


At the moment the two girls are in intensive care, where they have already doubled their body weight and their conditions are improving day by day. This surgery was the first in the world on such small babies (eight days old) and, by admission of the doctors themselves, it was a trip to "unknown territories"

"The perfect work of doctors and nurses from various disciplines has been the key to success - says proud Steffen Berger, head of medical staff at the hospital -" We are very happy that the girls and their parents are now so well ".

After days of exhausting waiting, the mother and father of the two sisters were finally able to breathe a sigh of relief.


«We are delighted - the father told the newspaper SonntagsZeitung - but it was not easy. We also discussed the possibility of not continuing the pregnancy of the twins and only keeping the third daughter alive. We know they may have problems, but that doesn't change anything for us. We will love and accept them for who they are».

add a comment of The story of the Siamese twins Lydia and Maya. Separate after 8 days of life