The teething of the newborn 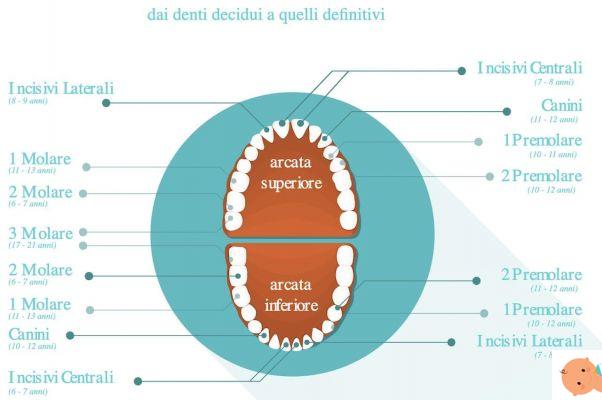 Children of parents whose teeth have come out very late compared to the average usually lag behind, even if the rule is not absolute. In most cases, the first tooth appears between five and eight months of life, on average between six and seven, followed almost immediately by the twin tooth. Here is the other information that may be useful on the subject.

IF HIM GIVES HIM HARM

Usually to soothe the discomfort that involves the gums during teething it is sufficient to offer the baby the toys to bite, preferably cooled in the freezer. In fact, the cold produces a pain-relieving effect that often manages to reassure the child. You can also massage the gum with your finger wrapped in a sterile gauze previously moistened with warm water. If none of these remedies work and the child appears to be suffering, it may be appropriate to use a specific dental gel, with a mild anesthetic action. However, it is advisable to consult the pediatrician to obtain the prescription from him.

GOOD TO KNOW - Fever and teething

A relationship between the onset of fever and teething has never been highlighted, although the idea is still widespread today that when the temperature rises there is a tooth coming in. It is also true, however, that often the child begins to get sick (fever, cough, sore throat and so on) just when teething begins: the hypothesis is that it is a pure coincidence determined by the fact that the teeth begin to make their appearance just when maternal antibodies begin to diminish, which remain in the baby's body for a few months after birth and have a highly protective action against diseases. Added to this is that dentition requires the body to make a commitment that can temporarily make it weaker towards the microorganisms responsible for respiratory tract infections.

Quiz: cleaning and care of teeth, how much do you know?

Baby teeth on the way

Do you want to compare yourself with other new mothers? Enter the forum, section Newborn

TAG:
Postpartum depression can last up to three years after the baby arrives ❯

add a comment of The teething of the newborn