The villocentesis: what it is, when to do it, what risks it entails 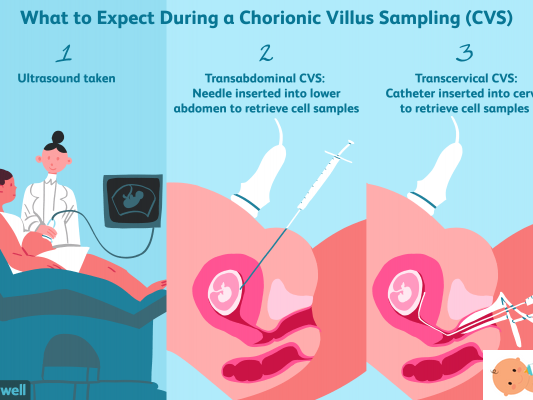 "The villocentesis o chorionic villus sampling is an invasive procedure of prenatal diagnosis which allows you to take fragments of the so-called chorionic tissue, from which the placenta will then develop "explains gynecologist Giovanni Monni, director of the departments of Obstetrics and Gynecology and Fetal Medicine of the microcitemic hospital of Cagliari. The fragments taken can be examined in the laboratory for get information about any chromosomal or genetic diseases of the fetus

Villocentesis, how it is performed

"In the vast majority of cases (about 90%), the sample is taken for via transaddominal, by inserting a needle through the woman's abdomen below direct ultrasound control"Clarifies Monni." The sampling takes about 5-10 seconds and does not require anesthesia ".

Transcervical sampling is also possible, but much less common, i.e. with the passage of the needle through the vagina and the cervix. "The transabdominal route is preferred because it involves less risk of complication, is faster and less annoying."

Villocentesis, or chorionic villus sampling, is an invasive procedure that allows you to collect fragments of chorionic tissue, a component of the placenta, which can be ...

Villocentesi, what it is used for and what information it provides

As Dr. Monni, based on the type of examination that is carried out on the material taken, various information can be obtained:

the most frequent use is for it study of the fetal karyotype. This study provides information on the number and structure of chromosomes of the fetus and therefore serves to diagnose any abnormalities such as the presence of trisomy 21 (Down's Syndrome).

For some years now, a new chromosome investigation technique called microarray allows to study in detail smaller portions of the chromosomes themselves than what happens with a karyotype traditional. Again, the goal is to identify chromosomal abnormalities: according to the joint recommendations of the Del Paesena Society of Human Genetics and the Del Paesena Society of Obstetric and Gynecological Ultrasound, this technique is not recommended as a first choice in prenatal diagnosis, but it becomes so in the presence of ultrasound abnormalities (fetal malformations, increased nuchal translucency, marked underdevelopment of the fetus) or when a karyotype traditional has already identified particular alterations that you want to analyze better.

In addition to the chromosomal investigation, CVS is used to identify any genetic diseases in cases where there is a risk that the fetus may be affected because its parents are carriers (thalassemia, haemophilia, cystic fibrosis, Duchenne dystrophy, some conditions that can lead to mental retardation).

Paternity of the fetus

Upon specific request, the paternity of the fetus.

Read also: Prenatal diagnosis: all the tests you can do to find out if there are problems

How many weeks of pregnancy can villocentesis be done

Chorionic villus sampling can be done starting from the XNUMXth week of pregnancy completed on. Typically, it happens between 11 and 13-14 weeks. "Before the completed 10 weeks it is not advisable because it could involve complications to the fetus and because so early you would not see any fetal malformations visible after 11 weeks" explains Monni.

When it is indicated

Monni specifies that the villocentesis can be proposed (never imposed) in the following cases:

Read also: Mom at 40? Here's everything you NEED to know

Is it bad to have a CVS?

"The examination is generally well tolerated. At times it can be annoying and, in some cases, slightly painful, or slight contractions may occur: in these cases it is advisable to take an antispasmodic once the sample is finished" says Monni .

How much does the villocentesis cost

In public centers or centers affiliated with the National Health Service, the villocentesis is free for women who, for the above reasons, have an increased risk of disease.

There are not many private centers that perform it, but in this case the costs are between 700-1400 euros.

Villocentesi, what are the response times

"Response times vary according to the type of examination that must be performed on the chorionic tissue taken", Monni specifies. "In the case of the karyotype generally they are needed three to ten days, while for molecular investigations that are done for any genetic diseases such as thalassemia or cystic fibrosis about three days".

The procedure is generally very reliable. "Rarely (less than 1% of cases), it may happen that the collection fails or the material removed cannot be properly examined. In other cases (1-2%) a doubtful result may occur, which may require further investigation . In these cases, the investigation is generally continued by performing an amniocentesis at 18 weeks of pregnancy ".

Risks to the fetus

Some private hospitals and laboratories indicate a risk of fetal loss (abortion) after the procedure still relatively high and equal to1-2%. "In reality - clarifies Monni - more recent studies than those on which those data were based have significantly reduced this risk. Now it is estimated that the possibility of abortion after the procedure is around one case in 800 or 1000 investigations. Not different from that. which is observed in the general population of pregnant women at the same gestational time ".

An important aspect to consider is that this risk can vary based on the experience of the center and the operator performing the exam. "For this reason it is very important to turn to centers and operators with proven experience, who perform CVS routinely and not occasionally".

As regards the risk of fetal malformations, there have been some reports in the past of an increased incidence of limb and face malformations in fetuses undergoing CVS. These reports, however, refer to withdrawals made in very early stage of pregnancy, with embryogenesis not yet completed. Recent experiences on very large case series and investigations carried out after the eleventh week did not report any particular risks in this sense.

Maternal risks are rare. There may be loss of blood and / or fluid from the genitals, uterine contractions, intrauterine infections with fever. In the case of a blood group with a negative RH factor, it is indicated to undergo anti-D immunoprophylaxis to prevent serious complications for the unborn child and for subsequent pregnancies.

Read also: Amniocentesis and CVS: what are the real risks and what precautions to take to reduce them

The examination is performed in the clinic, without the need for hospitalization and no anesthesia is required. As the national and international guidelines on the subject point out, no special preparations are required.

"As in the case of amniocentesis, however, it is essential that before performing a CVS the woman and the couple have an interview with a medical geneticist"Monni specifies. The consultancy is used to provide detailed information on the diseases that could be diagnosed with the survey, on the reliability of the tests, on the risks of fetal loss related to these invasive procedures, on the time required to obtain the results and on the options available in the event that the fetus has one of the genetic conditions sought by the test.

"After the blood collection, our patients remain in the waiting room for about an hour and then they can go home with the I recommend not to make physical efforts for a couple of days ", declares Monni, underlining that this does not mean absolute rest." If the woman does not work particularly demanding from a physical point of view, she can also go to work ".

How to choose between amniocentesis or CVS

Chorionic villus sampling offers the advantage of being able to be performed at an earlier gestational period than amniocentesis: 11-13 weeks compared to 14-16 weeks of amniocentesis. This makes it possible to diagnose any chromosomal or genetic abnormalities earlier, with a consequent decrease in anxiety about waiting. Precisely for this reason in recent years, characterized by the advent of screening tests based on fetal DNA, the use of amniocentesis has gradually decreased, in favor of villocentesis.

The villocentesis or chorionic villus sampling is an invasive prenatal diagnostic procedure that allows the removal of fragments of the so-called chorionic tissue, from which the placenta will then develop.

When is CVS done?

Is it bad to have a CVS?

The examination is generally well tolerated. Sometimes it can be annoying and, in some cases, mildly painful

TAG:
Violence against women explained to boys and girls ❯

add a comment of The villocentesis: what it is, when to do it, what risks it entails