Therapy pouch: what it is, how it works, what benefits it brings 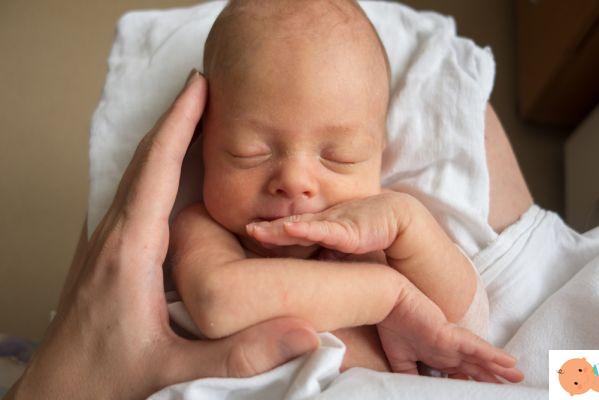 "The opportunity to creating a re-bond between a mother and a child who separated too early and suddenly. "The neonatologist Arturo Giustardi, president of the Del Paesena Society of care for perinatology, defines the therapy pouch o kangaroo therapy for preterm babies, whose world day is celebrated today, May 15.

"The mother of a premature baby has no way of becoming familiar with him after birth, because he is immediately taken to intensive care (NICU). The first indirect contact between the two usually takes place a few hours after birth, when the baby is brought , if possible, the drops of colostrum squeezed from the mother's breast: a few drops that are very important for her health. If the mother is well and there are no obstacles due to organizational choices in the center, in the first 12-24 hours it is possible to start the pouch therapy, putting the mother (or even the father) and the baby in skin-to-skin contact ", he explains. the neonatologist.

Skin to skin contact is also considered very important for full-term newborns, to promote bonding and initiation of breastfeeding, and several centers provide for it for at least a couple of hours after delivery if the clinical conditions of mom and baby allow it. In the case of preterm babies, however, it can even become lifesaver.

Therapy pouch or therapy kangaroo, what it is

The word says it: it is a therapy that takes inspiration from what kangaroo mothers do in nature. Their young are born extremely premature and unsuitable for independent life, but continue their development in a special maternal pocket - the pouch - where they are warm, protected and well fed by milk.

It was Colombian pediatrician Edgar Rey who first thought, in 1978, that something like this could also work for the many babies who were born prematurely in the hospital where he worked, the Maternal Infantil Institute in Bogotà: a birthplace so crowded that often several children had to occupy the same incubator at the same time, with very high infant mortality rates and neonatal infections.

Together with colleague Hector Martinez, Rey taught mothers of preterm babies how keep them on your chest in close contact with your bodyhe explained how to breastfeed them and how to handle any emergencies and finally discharged them much earlier than usual. The benefits immediately appeared striking in terms of reduction of mortality and neonatal infections and were confirmed in the following years by some studies conducted initially in Bogota and then around the world.

Today it is the World Health Organization itself that recognizes the value of kangaroo therapy, stressing that "it is routinely recommended for the care of newborns weighing 2000 grams or less and must be started as soon as the condition of the newborn is stable".

Read also: Photoreportage from the TIN: with the baby carrier I started to feel like a mother

In theory it is very simple: it is enough for the mother - or the father - to hold the baby on her chest. It is essential that there is a real skin-to-skin contact, without the slightest piece of fabric between the two: to ensure adequate warmth for the baby, the mother's one, a blanket on the back and a hat are enough. (And no, daddy hair is no problem!)

In practice it is a bit more complicated, because the child admitted to the ICU is often wrapped in a tangle of threads that can make it seem even more fragile and inaccessible to the parents than it actually is. "In these cases, the mother or father is helped by the staff, who obviously must be prepared on the subject. Nurses and nurses of the Tin learn to entrust these children to their parents by moving wires and tubes so that they get in the way as little as possible" says Giustardi .

The operators also invite mothers and fathers to talk and sing to their children, because their voices, known from life in utero, have a positive effect on neurological development. "Voice and songs can also be used for create a routine which will soon be recognized by the child. For example, upon arrival you can simply sing I have arrived, now we will play the kangaroo and when it is time to leave now I am leaving, but tomorrow I will be back ".

In the experience of Bogota, but also of other low- and middle-income countries, the pouch therapy is generally accompanied by a early discharge from the hospital (indeed, for many experts, early discharge is an integral part of the definition of kangaroo therapy) and is then practiced at home for many hours or all day. The same also happens in some high-income countries such as Sweden, but in other countries of the Western world there is a somewhat narrower interpretation of this therapy, often limited to a few hours a day when the child is in Tin.

The situation in Del Paese

As often happens, the Del Paesena situation is patchy for the pouch therapy too, as the results of a survey conducted by SIN, the Del Paesena Society of neonatology, in 2022: three years ago, "kangaroo therapy was proposed in almost all the TIN centers interviewed, but its use was reduced and penalized by the restrictions on entering the ward (allowed H24 only in 61% of cases) with strong regional disparities. the gestational age and the structural characteristics of the wards and strong differences in the duration and frequency of sessions ".

In other words it is not always practiced by us and when it is, it often happens for a relatively short time. "In any case, at least two hours in a row are recommended to allow the child to stabilize" explains Giustardi. According to which these limitations depend only in part on organizational aspects. "It also has to do with the fact that even today and despite all the scientific evidence in favor, not all operators - doctors and nurses - are really convinced that the baby carrier improves the short and long-term outcomes of children". Which probably also explains why things get even more difficult when the baby comes out of the ICU and enters the ward, where he can stay weeks before returning home and where opportunities to practice kangaroo therapy are often even more limited.

In addition there is the social, cultural and service organization context that doesn't help. "It is true that in Sweden premature babies are discharged earlier - that is, with a lower weight - compared to when it happens on average with us, but it is equally true that there are different territorial services, with a nurse who goes to see the mother and child all the days, the doctor who goes there once a week and the father who takes long parental leave and can be of great support to the mother. Here these services are very lacking if not completely absent, parental leave for fathers are limited and the importance of the father's participation in these paths is not always understood ".

The benefits of the therapy pouch

So what are the health benefits of this practice for children?

For example, a review of the scientific literature data published in 2022 in the journal Pediatrics took stock of the situation. The authors conclude that pouch therapy practiced with premature babies is associated with reduction of mortality and the risks of sepsis, hypothermia, hypoglycemia and breathing difficulties.

In addition, there is an improvement in temperature control, oxygenation in the blood - "in fact it often happens that shortly after putting a baby on the mother's chest, the monitor starts to ring indicating that oxygenation has risen a lot" he says Giustardi - and the rate of exclusive breastfeeding. Which in turn has a positive impact on the health of premature babies, resulting in better outcomes in retinopathy, one neurobehavioral development brighter and a lower risk of a serious disease called necrotizing enterocolitis.

The therapy pouch, like the skin to skin practiced with term babies, it has positive effects in terms of bonding, the constitution of the special emotional bond that is created between a child and his mother (or father). Finally, remember the benefits for mothers, who see this opportunity as one of the few concrete things they can do for their babies, after the trauma of premature birth.

Even during this emergency, the presence of parents in the neonatal intensive care unit (NICU) remains of vital importance for premature babies and must therefore be ensured. Similarly, even with the necessary precautions necessary to prevent the spread of Covid-19, the therapy pouch should not be interrupted, which brings numerous benefits to premature babies. This, in summary, is the position of the Del Paesena Society of Neonatology (SIN) on skin to skin and Covid-19, published on the occasion of the World Day of Therapy Pouch.

The situation, however, is not rosy. A survey carried out at the beginning of the pandemic by SIN in 27 TINs in the Center-North showed that the possibility of parents entering the ward had drastically reduced, with some centers that had completely forbidden access and just under half of the centers who had discontinued the therapy pouch. Yet, the SIN reiterates that "especially at this time, kangaroo therapy continues to be a unique aspect of care, capable of improve outcomes and shorten the length of hospitalization".

Among the new rules to follow to reduce the risk of coronavirus spreading in NICUs, in addition to proper hand hygiene, there are:

An octopus-shaped puppet for premature babies

Famous people who were born premature

Premature babies and breastfeeding, how to regulate

Neonatologists and pediatricians: "Single check is fine, but help is needed for the families of premature babies"

add a comment of Therapy pouch: what it is, how it works, what benefits it brings