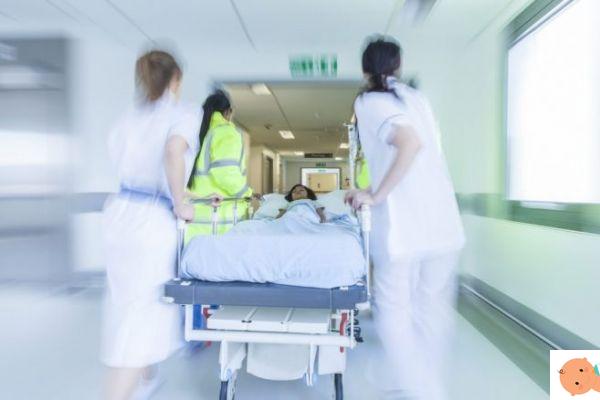 Digestive congestion is a typical ailment of summer and heat, which affects the gastrointestinal system and is due to a sudden change in temperature. At the origin of this phenomenon there is a block of digestion. Let's try to understand why and when it occurs.

Thermal shock syncope: what it is

Thermal shock syncope occurs when people experience a sudden drop in temperature, for example if they switch from very hot weather to cold water.

Your tongue may crave the freezing temperature of a popsicle on a hot summer day, but your digestion may be rebelling.

The body likes to keep its core temperature constant at around 37 °, which is when the best digestion occurs. If cold temperatures, such as ice water or cold food in the diet, enter the stomach, the body works quickly to warm it.

The problem - many argue - is that if you are in the water in these conditions you could risk drowning: due sudden cramps and pains may cause panic, or loss of consciousness.

Can I take a bath after eating? The few scientific studies on the risks

There are no guidelines that indicate a clear cause-and-effect relationship between full stomach bath and drowning, indications or official recommendations. However, many experts suggest caution and common sense, because the risk of congestion is possible and the consequences could even be serious.

Let's review the scientific literature on the phenomenon.

According to the World Health Organization there are other reasons such as drowning risk factors. It is also true that children are among the subjects most at risk of drowning and for this reason they should never be left alone near the water, without the gaze of an adult. For the American Pediatrics Academy, never leave children alone, not even for a moment, near the water, just to prevent drowning and The Centers for Desease Control and Prevention rather recalls the importance of learning to swim a lot. early just to prevent the risk. If we talk about congestion instead, according to a review published a few years ago by the American Red Cross, the available studies show no evidence that the mere fact of having eaten before diving into the water can increase the risk of drowning.

A conclusion endorsed by an official statement from the International Life Saving Federation (number 18: Eating before swimming), according to which, although the fact of having eaten may be associated with nausea, vomiting and abdominal pain once in the water, it is not a cause-and-effect relationship between these phenomena and the risk of drowning has never been demonstrated.

When it happens: beware of jolts

To understand how it starts, it is important to know that after eating, the blood flow is concentrated in the digestive tract. Therefore, the bloodstream helps you digest food. One of the main causes of the cold shock response is that there is a sudden change in temperature in the body during digestion. If this happens, the blood quickly goes to other organs, which disrupts the digestion process. Second Franca Barbic, scientific manager of the Humanitas Syncope Unit active in the Medical Clinic Operating Unit, to reduce the risk of neuromediated syncope in the summer months and in the hottest periods of the year you have to be careful of different aspects of the climate.

The most common symptoms of this problem in children are:

In these cases, the best way to relieve the discomfort is make the child lie down and raise the legs slightly. Normally, they start to improve within minutes. However, we recommend letting them rest for at least two hours.

In some cases the child may have vomiting or diarrhea. It is important that you pay attention. If you see these symptoms, it is best that you follow a liquid diet to avoid dehydration. If the situation is of immediate recovery, it is possible to evaluate, by calling the pediatrician, whether to visit the child, while if he has had a loss of consciousness and if he slowly improves it is necessary to have him examined.

As a precaution, it is recommended to always use common sense and children are advised to wait at least two hours after eating, also depending on the type of meal, before going swimming in cold water or playing games that require a lot of energy and activity. physics.

Also, if you know you're going to the pool or the beach, prepare lighter meals. This way, your babies can digest them faster. Try to avoid high-fat foods, as they take longer to digest. Also, you should be careful if your child has been playing in the sun as the temperature change will be more abrupt.

To avoid the risk of congestion, explains Sebastian Cristaldi, emergency pediatric expert at the Bambino Gesù pediatric hospital, the rules are to avoid:

TAG:
Syndactyly: when the fingers are together ❯

add a comment of Thermal shock syncope in children