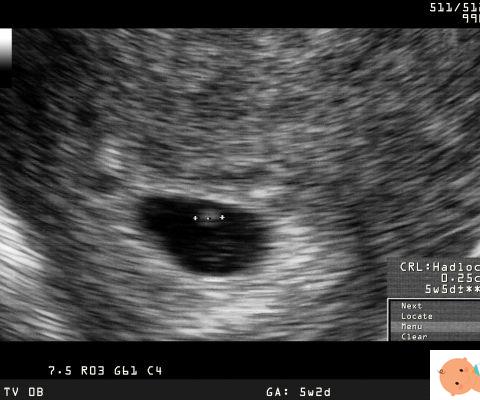 With the third week of pregnancy we can say that the real path of pregnancy begins and although the fetus is still a embryo, some women may already feel the early symptoms and, consequently, carry out a pregnancy test capable of ascertaining the pregnant state.

Given that there is no standard timeframe for having a pregnancy test, a woman can usually become suspicious of her condition when some (or all) of the following characteristics arise.

Of course, the most obvious sign of a pregnancy is the lack of menstruation, which however by the third week may not yet have manifested itself (a regular cycle repeats itself every 28 days, about four weeks).

To avoid having a false / negative pregnancy test, it is best to wait until your period is missing to do so.

Some tests are capable of detecting minimal amounts of the hCG hormone and can therefore also be used 2-4 days earlier than the day expected for the arrival of the menstruation, approximately 12 days after sexual intercourse considered to be at risk. However, many experts believe that those indicated starting from the first day of delay in the menstrual cycle are more reliable.

There are also tests that claim to identify a pregnancy up to a week before what should be the date of the new menstruation (provided you have regular cycles of 28 days): they are always do-it-yourself home tests, but to be performed on blood.

Read also: Signs of pregnancy: how to recognize them

Symptoms in the third week of pregnancy

In the third week of pregnancy we are still at the dawn of gestation and therefore it is normal not to experience any symptoms. However, there is no shortage of women who are already at this stage they begin to feel small changes of their daily life.

In addition to the aforementioned signs of pregnancy (nausea, breast gondio, sensitivity to smells and tastes, etc.), future mothers may feel the first cravings, that is, that irrational and sudden desire to consume a certain food that is often caused by hormonal changes that are already beginning to transform the maternal body in order to welcome the new life.

Episodes can also occur in these first few weeks blood loss (implantation losses) not to be confused with those caused by the menstrual cycle because they are milder and less lasting.

Read also: Birthmarks in pregnancy: what they depend on, how to behave

The fetus in the third week of pregnancy

At this time - and more or less up to the eighth / tenth week of pregnancy - there is still talk of embryo and not of the fetus. This embryo now has between 14 and 21 days of development and doubles its size with each passing day. Although this "cluster" of cells still appears shapeless, i first organs and systems - heart, nervous system, marrow etc ... - are already starting to form.

What happens after implantation?

After implantation in the uterus, the egg begins to develop, becomes an embryo and the cells of the new organism begin to multiply.

When do we start counting the weeks of pregnancy?

By convention, after having ascertained the pregnancy, the start of gestation is traced back to the date of the last menstruation.