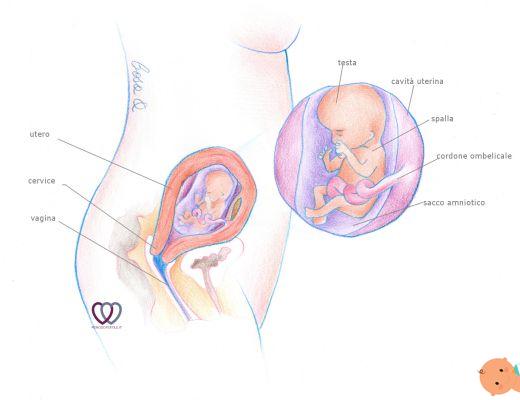 With the thirteenth week begins the second trimester of pregnancy: the baby begins to feed on amniotic fluid and to produce urine, while the maternal uterus continues to expand. With the scientific advice of the gynecologist Elisabetta Canitano, president of the non-profit association Vita di donna, let's see what happens to the woman's body and that of the child during the thirteenth week of pregnancy.

Symptoms of the thirteenth week

The symptoms of the first trimester have disappeared, or almost disappeared, one of the most recurrent physiological effects that could occur in this phase concerns the frequent need to pee. This is completely normal because the uterus, in strong expansion, presses more on the bladder. The urinations though they shouldn't be painful; otherwise it is advisable to alert the attending physician immediately. In addition, the increase in the size of the uterus often causes pain in the hips and the lumbar area.

Hormonal fluctuations could too aggravate pain in the teeth o to the inside of the mouth e make the gums bleed.

Other frequent symptoms are:

Health advice in the thirteenth week of pregnancy

In pregnancy, due to the new hormonal structure, saliva becomes more acidic: this increases the risk of caries. Repeated episodes of vomiting and nausea can also increase this risk, causing demineralization of the teeth, with erosion of the enamel.

In general, pregnancy is a critical period regarding oral health: in addition to caries, they can also occur inflammation of the gums e periodontal disease. All conditions that, in addition to causing discomfort (or pain) to the expectant mother, could also have negative consequences for the health of the fetus.

Advice: The first thing to do to avoid the risk of tooth and gum problems is to follow one proper oral hygiene, which consists first of all in brushing your teeth after each meal and after having eaten a sweet food. Also, if it's been more than six months since the last one check-up by the dentist, it is good to plan one immediately, with teeth cleaning and tartar ablation.

Pay attention to the diet

It is very important during pregnancy to follow a healthy and balanced diet, possibly Mediterranean-style. And don't overdo it with weight gain.

Advice: As an indication, here is a small outline of the calories that can be introduced in the three trimesters of pregnancy

The belly in the thirteenth week

in first three months weight gain and therefore the increase in the belly is minimal, on average the belly begins to show in the fourth month. However, the usual pants at the waist may start to bother you or a hint of a belly may already be visible. It depends from woman to woman and from the build.

What to do in the thirteenth week of pregnancy

If you are interested in the path to prenatal diagnosis, you have to hurry to participate in screening tests. The guidelines for physiological pregnancy of the Ministry of Health say in fact that this path must be offered to all women within the thirteenth week + 6 days (13 + 6).

Down syndrome screening and prenatal diagnosis

Until a few years ago, the only possibility to obtain information on the possible presence of Down syndrome in the fetus was to perform the karyotype examination, through villocentesis or amniocentesis. It is an examination that allows the actual diagnosis (that is, it tells with certainty whether the fetus is healthy or sick), but it can only be performed through a invasive procedure, which carries a risk, albeit minimal, of abortion.

The villocentesis consists in the collection of wild corial, from which the placenta will then develop. Like amniocentesis, it is done by inserting a thin needle into the abdomen, under the guidance of an ultrasound machine. After the exam, the rest for two days, with suspension of work and sexual relations. In some cases, a antibiotic or a medicine to prevent uterus contractions, but this is not a practice applied to all women, as it has not shown that it is really effective in reducing the risk of abortion.

Any symptoms, from pain to bleeding, should be promptly submitted to the attention of the structure in which the investigation was carried out. The advantage over amniocentesis is that it can be performed starting from the 15th week of pregnancy, while for amniocentesis it is necessary to wait XNUMX weeks.

Villocentesis and amniocentesis are exams offered by the National Health Service to patients for whom there is a high risk of fetal chromosomal abnormalities, for example for:

In addition to invasive prenatal diagnosis, however, other options are available today, which allow one to be made Down syndrome risk screening. It means that in this case a certain result is not obtained, but an estimate (actually more and more accurate and precise) of the risk that the fetus is affected. Possible options include:

Read also: Villocentesis and amniocentesis: which to perform?

Performing the first ultrasound is recommended by the thirteenth week of pregnancy. The purpose of this exam is:

If done around 11-12 weeks (and in general after 10 weeks, as advised by the Royal College of Obstetricians and and Gynaecologists of the United Kingdom) also allows you to do one anatomical evaluation of the fetus already quite accurate.

Read also: Ultrasounds in pregnancy, how many do you need to do?

Pain in the lower abdomen: when they need to get suspicious

In the first weeks of gestation, abdominal cramps are one of the most common symptoms of early pregnancy, but pain accompanied by bleeding, shoulder pain, problems with bowel movements and urination should never be ignored. These symptoms could indicate an ectopic pregnancy, and symptoms typically appear between 4 and 12 weeks of pregnancy.

When to get suspicious? If you have the sensation of imminent menstruation, with a sense of pain in the lower abdomen and kidney pain: the uterus is in fact anchored to the utero-sacral ligaments, which, stretching following the contraction, cause resentment in the kidney area, precisely as it happens during menstruation.

The fetus in the thirteenth week of pregnancy

The placenta has now taken on its disc shape which will remain so until the end of the pregnancy.

The child's body, about the size of a peach, gradually becomes more proportionate, so the growth rate of the head slows down. The fetus begins to produce urine, which is released into the amniotic fluid, while the liver begins to produce red blood cells. At the end of this week it weighs around 60-70 grams.

If you have performed the fetal DNA test you will already know if the fetus is male or female. Otherwise you will have to wait for the morphological ultrasound, which is performed around the twentieth week, which will allow you to:

What are the most common pains during the thirteenth week of pregnancy?

The expansion of the uterus and the weight gain of the fetus can lead the mother to suffer from pain in the hips, back and feet. Teeth can also be affected at this stage of pregnancy.

How big is the fetus at the thirteenth week of pregnancy?