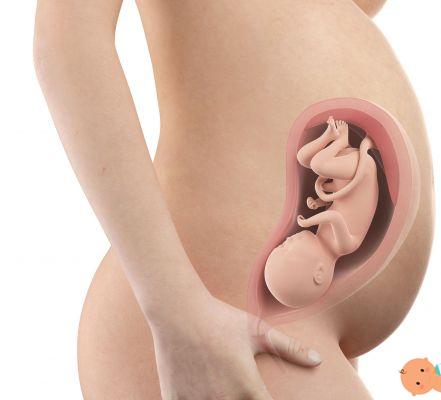 The eighth month has now begun and the baby is almost ready to be born. With the scientific advice from gynecologist Elisabetta Canitano, president of the non-profit association Vita di donna, let's see what happens to the body of the mother and that of the child during the thirtieth week of pregnancy.

Symptoms of the thirty-first week of pregnancy

The expanding uterus now also presses hard on the lungs, so it's perfectly normal to try shortness of breath e fatigue. The circulation is also affected by this moment of great physical stress and it is not so unusual that the increase in blood volume causes stagnation, the cause of the notorious varicose veins.

Also in the blood, the hormone may already begin to flow relaxin, which has the task of "softening" the ligaments to ensure maximum elasticity in the pelvic area during delivery. This does not involve major changes in the daily life of the expectant mother, who, however, may notice that she is walking with a slightly more swaying gait than usual.

Other frequent symptoms during the XNUMXst week of pregnancy can be:

Read also: Back pain in pregnancy

What to do in the thirty-first week of pregnancy

Keep your weight under control

According to indications from the US Institute of Medicine, weight gain in the third trimester should be roughly the same as in the second trimester.

According to international guidelines, also shared by our Ministry of Health, at the end of pregnancy the overall weight gain should be as follows:

Dad in the delivery room: yes or no?

Witnessing the birth of a child is an extraordinary experience for dads. Given this, it is good that man is free to freely choose what to do: if he does not feel like it, he must be allowed to escape, without burdening him with guilt. The love of a husband and a future father for her partner and child has no relation to her decision to be or not to be present in the delivery room during the expulsive phase.

However, it is generally recommended that she be present during labor, because at this stage her support and psychological support can be of great help to the expectant mother.

The fetus in the XNUMXst week of pregnancy

The little one - what now weighs more or less a kilo and a halfor and it is about 45 centimeters long - he still has a couple of weeks ahead of him to be able to move easily, after which the space will begin to become cramped and will prevent him from continuing with flips and somersaults. He may already be in the correct position in relation to childbirth, that is, upside down with the feet up, or it can still be upside down, that is, in the breech position. In this case, he can still spontaneously turn around until the 33rd week.

Now the respiratory system works almost completely independently and begins to regulate the day according to rather regular sleep-wake rhythms. Lashes and hair come out more and more luxuriant. If a male is expected, the testicles reach the scrotum.

How much does a fetus weigh in the XNUMXst week of pregnancy?

How many months of pregnancy are in the XNUMXst week?

At the thirty-first week we are at the beginning of the eighth month.

TAG:
Trichotillomania: why do children pull their hair? ❯