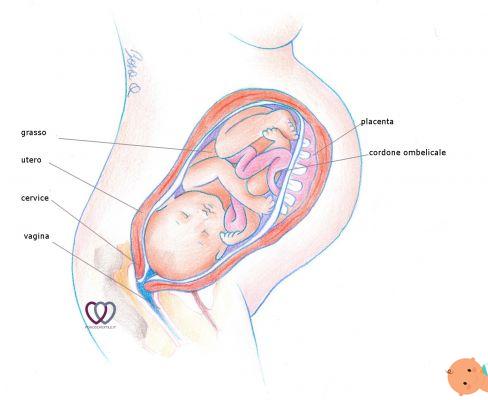 Past the XNUMXth week of pregnancy, every day can be the right one for the onset of labor. So here's what happens to your body and your baby during thirty-ninth week of pregnancy. With the scientific advice from gynecologist Elisabetta Canitano, president of the non-profit association Vita di donna.

Symptoms of the thirty-ninth week of pregnancy

The fateful moment is getting closer and the future mother just has to be prepared, without letting herself be taken by anxieties or worries. Net of swelling at the feet and difficulties sleep (probable symptoms), it is therefore important to rest properly, but remain quite active during the day, obviously without making excessive efforts.

Pay close attention to contractions keeping in mind, however, that the labor it is heralded by contractions regular It's long (at least 45-50 seconds), with increasing intensity.

In the days preceding the birth, some symptoms warn the organism that something is changing and that the fetus is preparing to go out: you may feel a sensation of greater pressure in the pelvis, you can lose the mucous plug, you can intensify the contractions of Braxton Hicks.

The actual labor, however, can be considered started only when the contractions become more and more intense, prolonged and regular and cause discomfort (or pain) in the abdomen, hips or back area. Generally, doctors advise against going to the hospital at the first symptoms of labor and suggest going there when the contractions have been regular (every 10-15 minutes) and long enough (about 20 seconds each) for at least two hours. However, if the waters (or, as they say technically, the membranes) should break, you have to go to the hospital even if the labor has not yet started. No fear: it is practically impossible not to notice the breaking of the waters, because you have the distinct impression of having peed without having had time to reach the bathroom ... Read also: Labor: what it is, how it starts and the signs

The stages of childbirth

There are three stages of childbirth:   Read also: Childbirth: 10 things you need to know but no one tells you

The child continues to grow, especially in terms of weight. Now in fact the fetus it is long on average 50 centimeters and weighs around 3 kg and 300/400 grams.

Now his movements are extremely limited, tight as it is in the uterine cavity which has now become really too small for him. The bones at this moment I am particularly elastic to facilitate the phases of exit from the uterus. The placenta provides the baby with antibodies that will be used to fight the first infections after birth and the umbilical cord is more than 1 centimeter thick.