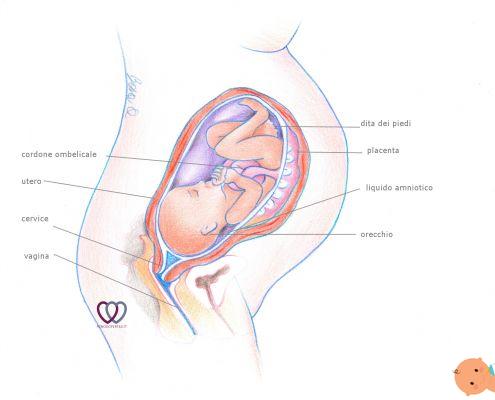 The pregnancy flows rapidly towards its conclusion. With the scientific advice from gynecologist Elisabetta Canitano, president of the non-profit association Vita di donna, let's see what happens to the body of the mother and that of the child during the thirty-second week of pregnancy

Symptoms in the thirty-second week of pregnancy

During this time, vaginal discharge may increase and this shouldn't worry you too much. The increase in whitish secretions is caused in cats caused by a increased blood circulation in the vaginal area. The situation is different if the losses are accompanied by excessive itching or burning, because it could be symptomatic of an ongoing inflammation.In this case it is better to consult a doctor.

It will be more and more likely to feel tired and perceive a wheezing, as the pressure exerted by the uterus on the lungs and lower back increases almost every day.

Other frequent symptoms during the XNUMXnd of pregnancy can be:

Health tips for the XNUMXnd week of pregnancy

Preeclampsia It is a disease (formerly known as gestosis) that occurs only in pregnancy, usually from mid-gestation onwards, and resolves spontaneously after childbirth. Symptoms are represented by an increase in blood pressure (over 140 mmg for the maximum, over 90 for the minimum) and the presence of proteins, in particular albumin, in the urine. In the most severe forms, vision changes, vomiting, nausea, malaise, irritability, headache may appear. Sometimes swelling is also associated, particularly in the ankle area. (Read also all about gestosis in pregnancy)

The causes of the disease are not well understood, although there are various hypotheses on the risk factors. Among these, the maternal age (less than 20 years or more than 40 years); twin pregnancy; familiarity; diabetes before pregnancy; chronic hypertension; obesity. However, it must be said that in most cases preeclampsia occurs without particular risk factors.

Preeclampsia is a serious disorder, which can lead to slowing or stopping of fetal growth, abruption of the placenta, and even serious problems for the woman's health. It requires hospitalization and is mainly controlled by the administration of medicines that lower blood pressure. As soon as the situation becomes critical, for the mother or the child, an early delivery (usually caesarean) is carried out, even if this can lead to the birth of a premature baby.

Advice: in the face of the appearance of one or more of the symptoms described above, it is necessary seek immediate medical attention. A real prevention is not yet possible routinely. For the moment, the recommendation to be made to all pregnant women is accurately measure blood pressure at periodic intervals: once a month in the first months, two / three times a month after 20-22 weeks and every week from the beginning of the third quarter. Also very important'urinalysis, to identify any proteinuria: it is to be done once a month and even 2/3 times in the last month.

Also read: 12 phrases NOT to say to a woman in the third trimester of pregnancy

What to do in the thirty-second week of pregnancy

From the thirty-second week of pregnancy it is possible to undergo fetal flowmetry, or Doppler, a non-invasive and non-mandatory examination which, through the use of ultrasound, allows to evaluate the state of the fetal circulation and functioning of the placenta. It is especially done when there are suspicions of blood flow malfunction, which could complicate delivery.

In case of anomalies the operator who performed the examination could refer the woman to a specialized fetal medicine center.

Read also: Placenta: what it is, when it forms, what is it for, what happens if it works poorly

The fetus in the thirty-second week of pregnancy

Now the fetus weighs more or less 1700 grams and measures approximately 45/46 cm in length. The baby therefore continues to grow faster and faster, gradually taking on the appearance it will have at birth. The organs and systems prepare themselves for facing life outside the wombFor example, even if the lungs are not yet fully formed, begin to practice breathing. THE mechanisms that regulate the internal temperature of the body they begin to work and the fine hair that has covered the body in the previous weeks begins to fall out.

The hair takes on its final color and the space in the uterus starts to get really tight, so kicks and movements increase.

How much does a baby weigh in the XNUMXnd week of pregnancy?