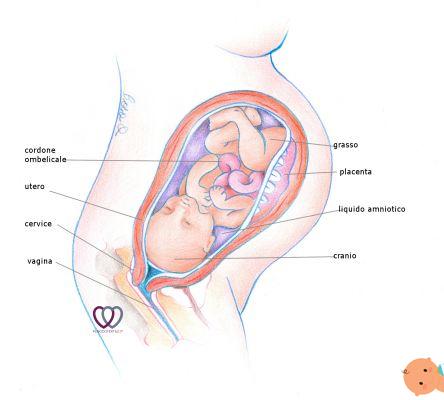 Finally, the ninth and final month of pregnancy begins. With the scientific advice from gynecologist Elisabetta Canitano, president of the non-profit association Vita di donna, let's see what happens to the body of the mother and that of the child during the thirty-fifth week of pregnancy.

Entered the ninth month, at fatigue daily and alo increasingly frequent stimulus of Pee you could also add a few difficulty in falling asleep. In this case, keep a power supply regular and light can help rest.

If the baby has already taken the cephalic position then (ie has the head turned downwards), it means that he is ready to go out and therefore he can already begin to pay attention to any contractions. Let us remember that the labor it is heralded by contractions regular It's long (at least 45-50 seconds), with increasing intensity.

Read also: How to give birth

Health tips for the XNUMXth week of pregnancy

The swab for strep

This is a recommended exam 36-37 weeks from Guidelines of the Ministry of Health, even if it is not included in the ministerial protocol of specialist control services, so it is not passed on by the National Health Service. It consists in the search, with a vagino-rectal swab, for beta-haemolytic streptococcus, a bacterium that is harmless to the mother but which at the moment of delivery could attack the baby while it passes through the vaginal canal, triggering an infection. To avert the danger, to mothers carriers (10-20 percent of pregnant women) one is performed during labor streptococcal prophylaxis, which consists in the administration of a specific antibiotic. In addition, newborns of carrier mothers are subjected to thorough checks immediately after birth, precisely to rule out that they have been infected.   Caution: the antibiotic should be administered only at the time of delivery, while it is not necessary to take it before, when eventually it is discovered that you are carriers of beta hemolytic streptococcus. It would be useless (streptococcus in the vagina is completely harmless) and indeed there would be the risk of inducing the bacterium to develop resistance to the antibiotic. In this case, making it harmless to the baby at the time of delivery can become difficult.

TWINS? IN GENERAL, THEY ARE BORN FIRST


The World Health Organization defines preterm birth as a birth that occurs before the start of the 38th week of pregnancy: it is obvious that the more it occurs earlier than this period, the more children can have problems adapting to life outside of pregnancy. 'uterus. As for the twins, it is true that they tend to be born 3 weeks earlier than the average for other babies (in 30-50 percent of cases). The responsibility is likely to lie with the little space which the twins can dispose of towards the end of the pregnancy. However, this does not mean that it is not possible for a twin pregnancy to arrive and exceed 38 weeks.

This is also the time to make sure everything is okay with the layette, even if you are sure that grandparents, uncles and friends will be giving away jumpsuits, sweaters, blankets and bodysuits. If it is true that it is not advisable to exaggerate, it is equally true that some basic clothing they will also be needed immediately after birth. Typically, the hospital provides a list of the required clothing.

It is indicative of some cotton bodysuit (which have the dual function of underwear and "diaper-stop" panty), some terry or cotton jumpsuit size 0-3 months, a pair of sweatshirts o dolphins, socks, bibs, a pair of caps and a couple of covers. A definitely essential purchase is the car seat, which the Del Paesena law requires and in which the child must be placed from the first days of life.

The fetus is now around 46-48 centimeters long and weighs around 2800 grams. Even the last "touches" are gradually completed: the blood circulation is now at full capacity and also immune system e lungs they are fully functional

The little one sleeps a lot during the 24 hours to allow the brain to complete its development, aided by sleep. If he were to be born, he would almost certainly survive on his own and would be able to suckle from the breast.

How much does a baby weigh at 36 weeks?

The fetus in the 2800th week weighs about XNUMX grams