This house is not a hashtag: advice for moms and dads on the Net 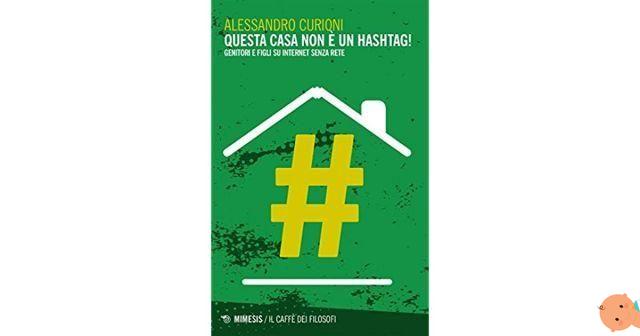 The most powerful weapon at your disposal is example, because they see you. So with respect to the Net, first of all you put yourself in safety, then help your children to do the same. And ultimately, lose the bad habit of turning on your smartphone and turning off your brain at the same time.

Alessandro Curioni is a cybersecurity expert. And in the new book This house is not a hashtag (Mimesis edizioni, 2022) makes us reflect on how to live the web and live with our children in a world made up of bits, posts, tweets and shared photos. Because in fact the relationship between parents and children now also travels through a wi-fi connection.


And if they, your children, because they are digital natives, believe they know more than you, Curioni says: “Avoid assuming an attitude of superiority. But ask questions. If you ask, for example, how to create a list of friends on a social network, you will have the opportunity to find out if he is able to do it (if not, worry), to send him some advice dictated by common sense, to give a look at the type of content you post. In this way you will achieve two objectives: to obtain information on how it behaves and to provide some good ideas ”.

The Internet has never been so little "virtual" and so "real". This is the starting point. Gardens, courtyards and squares are like social networks, chats, internet sites: "places" where you can meet friends and unknown people (even ugly people), play, chat ... And just like parents give rules for attending the former cannot fail to dictate a code of conduct in the use of the latter. Because, after all, the warning that all parents have given at least once in their life, "do not accept candy from strangers", also applies to the web, where however the bait is not the candy but the friend request or the offer of some free telephone traffic.

1) You will not access any social network, site or messaging system that is not authorized by me.

2) You will not accept anything from strangers, even if it is mere friendship.

3) Remember not to join groups of strangers when playing online.

4) You will not post or give personal information such as name, surname, age, home or school address to strangers.

5) Remember that everything you post will be on the Internet forever.

6) You will not have groups, chats or friendships with violent kids in their way of expressing themselves.

7) You will not throw a tantrum on the smartphone of others.

8) You will not open profiles using the data and images of others.

9) You will not like or approve posts, images, videos that are violent, racist or derisive.

10) When you are told "just chat, play and so on" you will not repeat it a second time.

These are instead the virtues to which to appeal, according to the author, in order not to act in a foolish way on the net, for example by sharing inappropriate images that can embarrass oneself or hurt someone else.

La Caution: the one that suggests not to post or communicate any image or writing that you would not post at the entrance to your school.

La Justice: which allows you to give everyone what they deserve, including themselves. And makes sure to find answers to questions like: "Why do I have to make a fool of myself by posting this comment?", "Why do I have to throw all this money away for ...?" and others of the same tenor.

La Fortezza: who has the task, if ever your son / daughter should fail to the two previous virtues, to make sure that he bears the insults and irony of which he will be a victim.

La Temperance: necessary not to overdo it in playing, chatting, posting and so on.

A book for mothers and fathers

Our advice: read the book, because it is full of food for thought, advice on how to attend (and make people frequent) the Internet safely, mistakes to avoid and also exercises to do all together, as a family, to test yourself in terms of opportunities and risks of the web. And then there is a chapter written by his daughter Bianca that lets us enter the everyday life of a teenager and learn about the practically symbiotic relationship that adolescents have with smartphones.

After all, if those who are adults today try to take a dip in the past, thinking back to those afternoons in which they were struggling with homework and a bit of entertainment, they easily realize that the time was on average marked by television, stereo, encyclopedia, paper , pen, phone, watch, camera. “Today, for a teenager there are not eight separate objects, but only one: the smartphone. Tool with which adolescents manage a good portion of their life and carry out dozens of activities that previous generations distributed among different objects. Do you think then that it still makes sense to ask why they always have it in their hand? Useless to fight rearguard battles trying to limit its use, rather - advises Curioni - invest energy and resources to ensure that they use it for the best ".

Why the net is neither good nor bad.

We are the ones who must know how to use it.

The 10 saddest cartoons of the 80s

Clutter is good (even for children): four tips for parents

Cycling, 4 reasons to make it your favorite physical activity

Many phrases for mothers, fathers and children

add a comment of This house is not a hashtag: advice for moms and dads on the Net