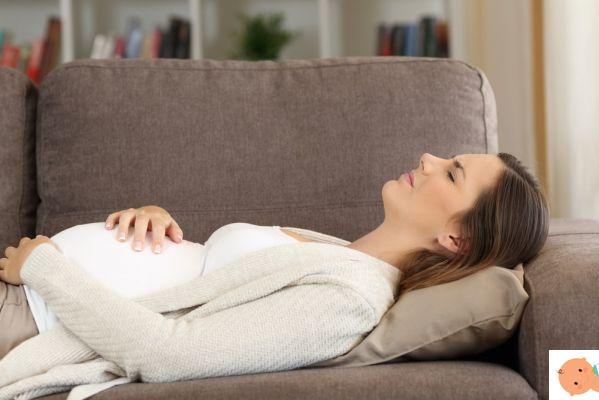 It is a decidedly infrequent occurrence, which affects only 1% of pregnancies, however also signs may occur in the second trimester that may herald a threat of late abortion or, if symptoms occur from week 24 onwards, a threat of preterm labor.

Contractions and losses: when they are normal and when not

The two main signs of a late abortion or preterm birth are uterine contractions and blood loss. "However, it should be specified that feeling slight contractions of the uterus in the second trimester or a sensation of a hard belly can be completely normal", notes Stefano Bianchi, head of obstetrics and gynecology at the San Giuseppe Hospital in our city: "to determine such symptoms may be rapid and noticeable growth of the uterus and distention of the uterine ligaments.


Even fetal movements can induce the uterus to contract, as can sudden changes in position by the mother (for example if she gets out of bed a little too quickly) or intense physical activity: however, these are hardening not painful and that disappear by simply slowing down their rhythms.

However, if the expectant mother feels an unusual hardening of the belly or premenstrual spasms, rather intense and repeated, it is always good to consult the gynecologist, who, after a gynecological examination and an internal ultrasound - useful for measuring the length of the neck and check for any changes - you will be able to assess whether they are physiological contractions or not. It is also essential to be seen in the event of abnormal leaks, not just blood, as they could be a sign of a vaginal infection ".

Why is there a miscarriage or threat of preterm delivery in the second trimester? "The causes are a little different than in the first quarter" replies Stefano Bianchi, head of obstetrics and gynecology at the San Giuseppe Hospital in our city.


“The main one is linked to cervical incontinence, ie the inability of the cervix to remain closed and prevent the product of conception from being expelled. In turn, incontinence can be attributed to two causes: one congenital, when the uterine neck does not have an adequate structure for anatomical reasons, and the other resulting from previous surgical procedures. This is the case of frequent scrapings due for example to abortions or conizations carried out following neoplasms that have repeatedly involved the dilation of the cervical canal, which therefore is no longer able to prevent the gestational sac from protruding outwards.

Congenital incontinence is an event that is difficult to predict, which can only be found during the gynecological examination starting from 12-14 weeks, while in the second case it is a predictable and preventable event ".

Cerclage: the remedy to keep the uterine neck closed

How to try to remedy cervical incontinence? "With cerclage, which is a surgical technique (practiced under general anesthesia) that closes the uterine neck with a kind of 'noose' and allows it to perform its anatomical function up to about three weeks before the expected date of delivery, when it is removed as an outpatient without the need for any anesthesia "replies prof. Whites. "In the days immediately following the operation, one must rest and take tocolytics, or drugs that relax the muscles of the uterus, and intercourse must obviously be avoided".

Cerclage can be performed in a preventive form if there are already known factors of cervical incompetence (abortions, conizations) around the 13-14th week of gestation, or in a therapeutic form, if signs of incontinence emerge from the visit.

PLEASE NOTE: Having made the cerclage does not imply the execution of a caesarean section and, once removed, the labor is expected to start spontaneously.

Another cause of the threat of late abortion or preterm birth is the presence of vaginal infections which, going up the vaginal canal, can reach the uterus and trigger the production of prostaglandins, which are the 'fuel' of contractions.

"Precisely to prevent this occurrence it is important to diagnose any infections and treat them promptly" underlines the gynecologist; “If, on the other hand, contractions already arise, we must try to block them with specific drugs, while cerclage is contraindicated, which not only does not serve to stop contractile activity, but risks the infection to spread further.

In fact, by preventing the escape of infected secretions from the cervical canal, the cerclage would favor the development and spread of the infection to maternal as well as fetal tissues. This condition can result in a maternal sepsis which is very dangerous for the mother's own life ".

A late abortion can be caused by fetal malformations (which push the maternal organism and expel an unhealthy product of conception) or uterine malformations, such as the uterus septum, which make it impossible to continue the pregnancy.

In a minority of cases, the cause are autoimmune diseases or blood clotting defects, such as thrombophilias, which can lead to impaired circulation between the uterus and placenta.

Threats of abortion, how to recognize them and what to do

add a comment of Threat of late abortion or preterm birth