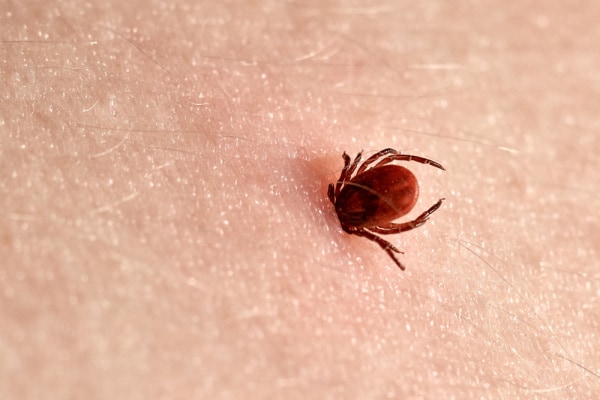 What are ticks
What can the tick bite transmit?
Lyme disease and tick-borne encephalitis
Where ticks live
How a tick stings
It is true that ticks have increased
When ticks bite
How to recognize a tick
How to prevent stings
Can they stick to the head?
How to remove a tick
What to do if the rostrum remains in the skin
Do I have to go to the emergency room to remove a tick?
What to do after removing a tick
What not to do absolutely
Is it possible to prevent Lyme disease after the sting by taking antibiotics?

Le ticks they are arachnids (close relatives of spiders, mites and scorpions) that need to consume a few meals of blood to complete their life cycle. To do this, they can attach themselves to different species: from dogs to deer, from squirrels to humans.

"In reality the man is only one occasional guest"explains Ermenegildo Francavilla, director of the Infectious Diseases Unit of the San Martino Hospital in Belluno." In general, they prefer wild animals ".

Ticks: photos to recognize them

They generally prefer wild animals, but a tick can also sting a man or a child. In most cases, the bite does not cause consequences. Could be...

2. What the tick bite can transmit

The tick bite itself is not a problem and tends to go unnoticed because it typically does not cause neither pain nor itching. "Often you do not even notice the bite, due to some anesthetic substances injected by the animal" specifies the expert. In addition, in most cases, the bite does not cause consequences.

Sometimes, however, precisely through the bite the tick can transmit to the host any microorganisms (bacteria or viruses) responsible for various diseases. Among the diseases most frequently transmitted by ticks in our country we find:

Others, such as rickettsiosis or relapsing tick fever, are less common.

"For ticks to transmit a disease they must be carriers of the responsible germ, and not all of them are," explains the expert. "Furthermore, in the case of Lyme disease they must remain attached to the host for a sufficient time to ensure the passage of the bacterium, that is at least 48 hours. For this reason, if a possible carrier tick is removed immediately, the risk of contracting this disease is considerably reduced ".


La Lyme disease - or borreliosis - it is an infectious disease caused by a bacterium that is transmitted through the bite of infected ticks. The first symptom is typically cutaneous: a slowly expanding reddish ring (erythema migrans).

If nothing is done, other symptoms may appear in the skin, heart, nerves, brain, eyes, joints. The disease can however be treated with a special one antibiotic therapy: the sooner the therapy is started (therefore the earlier the diagnosis is made) the better.

Also 'tick-bite encephalitis it is an infectious disease, however, caused by a virus, always transmitted through the bite of infected ticks. In most cases the infection does not involve symptoms, but in about 30% of cases after a few days from the bite (and up to a month later) symptoms similar to those of the flu may appear (high fever, headache, ache throat, fatigue, muscle and joint pain).

Generally there are no other consequences, but in a minority of these symptomatic cases, more important symptoms affecting the nervous system, such as encephalitis, may appear after another 10-20 days.

Tick-bite encephalitis tends to be less frequent and less severe in children, possibly for reasons related to immune development. It can be prevented with a Vaccine, which can be given in any age group and is recommended for anyone living in areas particularly at risk. For example, in Del Paese, Friuli Venezia Giulia, Veneto, Trentino.

3. Where do ticks live

There are many species of ticks. The most widespread and most relevant, from a health point of view, in Del Paese and in Europe are the so-called mint of the woods and dog tick.


Ticks live wherever there are tall grass and bushes, or beds of dry leaves. So they love them wooded areas, uncultivated meadows, areas on the border between meadow and wood, especially if they are a bit humid. They are present in many areas of the Del Paeseno territory: preferably in hilly or low mountain areasBut not only.

"The potential risk of contracting Lyme disease is present throughout the country, because ticks everywhere can carry the bacterium responsible. However, regions such as are more at risk. Liguria, Veneto, Trentino Alto Adige, Emilia of the city"explains Francavilla." As for tick-borne encephalitis, on the other hand, the risk is greater on the Alpine and pre-Alpine territory. Therefore, those who live in the mountains or attend it in the summer for holidays must be particularly careful, in particular hikers, fishermen, campers ".

To reach their "victims", ticks lurk at the ends of the plants, waiting for the passage of an animal or a man. When a guest arrives, they climb on it, look for a warm area, therefore well supplied with blood, stick the rostrum (mouthparts) into the skin and begin to suck blood. They generally remain attached to the host for a few days and then drop by themselves.

Insect stings and bites: a small guide to recognize, manage and avoid them

In spring and summer, as we know, insects swarm. From "banal" mosquitoes to scorpions, here are those who threaten children (and others), with some useful information on how ...

5. Is it true that ticks have increased?

"The habitats where they live have increased" explains Francavilla. "With the abandonment of the countryside and mountainous areas, uncultivated meadows, unclean woods and even wild animals that can be parasitized by ticks, such as roe deer, deer and wild boar, have increased." The result is that there are also more ticks.

Ticks are particularly active between spring and late autumn, approximately from May to the end of October.

7. How to recognize a tick

They are very small animals, from a few millimeters to a couple of centimeters, usually dark, reddish-brown in color. The body is rounded and the head is not distinguished from the rest of the body.

8. How to prevent stings

Some tricks help to prevent ticks from ending up on us. Others allow you to identify them quickly, to remove them before they stick to the skin. Let's see them:

9. Can ticks attach themselves to the head?

"In theory, yes" says Francavilla. And always in theory, this is especially true for children, who maybe throw themselves on the ground in the meadows to play. "In practice, however, it is rare for a tick to settle on the head. It usually prefers other parts of the body, such as arms, legs, trunk." Fortunately, because identifying a tick on the head can be particularly complicated, given the small size of the animal and the presence of hair.

To remove a tick you need one tweezers: on the market there are special ones, but common eyebrow ones, with thin tips, are also fine. The animal must be grasped as much as possible close to the skin surface, and removed by pulling gently but firmly and trying to make a slight twisting motion to the left.

Beware of do not crush the body of the tick during this operation, to avoid the risk of regurgitation, which could favor the transmission of any pathogenic germs.

Once the tick is removed, the skin can be cleaned with a uncolored disinfectant.

The tick, which must never be crushed with bare hands, must then be destroyed (for example by burning it) or thrown away.

11. What to do if any remnants remain in the skin?

What can get stuck in the skin is the rostrum, or mouthparts, which could cause irritation or inflammation from a foreign body but, on its own, is not capable of transmitting disease. In this case, that's enough remove it with a disinfected needle, as you would with a thorn or a splinter of wood. "In any case, the organism itself will tend to expel him within a few days," Francavilla specifies.

Do you need to go to the emergency room to remove the tick?


"Not necessarily" replies Francavilla, saying that especially in the areas where they are more widespread it is very difficult to resort to the emergency room: instead you get used to doing it yourself.

"The procedure is not difficult: just grab the tick with tweezers and apply a slight pulling and turning motion to the left. It doesn't take much, and the animal detaches itself. Of course, if you really don't feel like doing it yourself, you can go to the emergency room, but in general you don't need a specialist at all to remove a tick! ".

12. Things to do after removing the tick

Careful observation for 30-40 days after the sting allows for early detection of any signs of Lyme disease. It is thus possible to intervene very early, reducing the risk of complications

13. Things not to do absolutely

The tick is removed with tweezers and that's it. They do not go never used substances such as alcohol, petrol, acetone, trichlorethylene, petroleum, ammonia, oil, nor red-hot objects, which can even be counterproductive. "They could in fact solicit a regurgitation by the animal, with the passage of potentially infected material and therefore an increase in the risk of contracting any diseases" Francavilla stresses.

14. Is it possible to prevent Lyme disease after a sting by taking antibiotics?

No: the intake of antibiotics in the 30-40 days of observation is not recommended, because it could mask any symptoms of the disease, making the diagnosis more complicated - and therefore later -. There are no special medications to take after a tick bite. If by force, and for other reasons, you need to take an antibiotic during this period, you must tell your doctor that you have been bitten by a tick, so that he can evaluate what to do.

Read also: all about insect bites and children

Sources for this article: consultancy from Ermenegildo Francavilla, director of the Infectious Diseases Operating Unit of the San Martino Hospital in Belluno; in-depth analysis on the Epicentro (Higher Institute of Health) website; More information on the website of the Bambino Gesù Pediatric Hospital; Information material Usl di Parma.

TAG:
What water to drink when pregnant? ❯

add a comment of Tick ​​bites: 14 things to know