Tics in children: how to behave 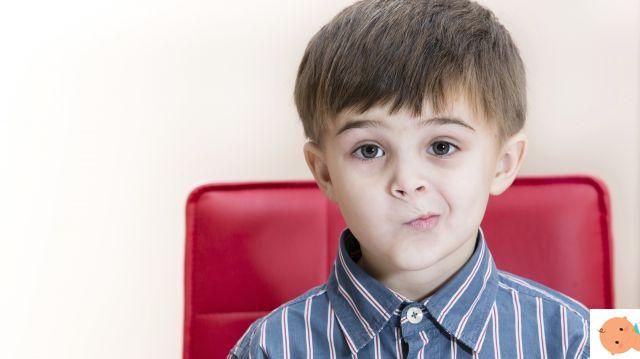 What are childhood tics

Tics are sudden movements, repetitive and jerky, which the child cannot control or suppress. They are essentially divided into two types:

These can be associated with the so-called trichotillomania, i.e. touching one's hair repeatedly (sometimes until it comes off, so as to cause areas of alopecia), coprolalia, that is to say bad words, or the echolalia, that is, the tendency to repeat the words of others, like an echo.

When both motor and vocal tics occur we speak of Tourette syndrome.

Read also: Trichotillomania: what it is and how it manifests itself

Why do tics appear

When they arise and to whom

Tics can arise from 5-6 years of age, with a slight prevalence of males over females. "The mechanisms of onset of tics are still unclear, but we have seen that there is first of all one family predisposition, so if a close relative has suffered from it as a child it is easier for them to manifest themselves "underlines Giovanna Tripodi, child neuropsychiatrist at the Pediatric Complex Operating Unit of the Bianchi-Melacrino-Morelli Hospital in Reggio Calabria.

They are also affected more frequently the classic 'perfect' and hyper-controlled children, who rarely cry or scream, but tend to suppress their emotional reactions.

Triggering situations can then be added to these predisposing factors: tics manifest themselves with greater intensity when the child experiences situations of emotional tension, stress or perceives exaggerated expectations towards him, while they are attenuated when the child is absorbed in activities that engage his concentration, such as when reading, drawing or playing a sporting activity. Unlike other involuntary movements, such as seizures or epilepsy, they never occur during sleep.

How are tics resolved?

In the vast majority of cases, tics are transient phenomena, that limit themselves with age and very few tics persist beyond adolescence.

So what to do if the child has tics? "The first thing is to observe the child, without trying to correct it, also because usually he doesn't even notice it, except when he is scolded by his parents or made fun of by his classmates "replies the neuropsychiatrist." not to be laughed at; at the same time, teachers could avoid opportunities for stress or excessive exposure to the child, by questioning him from the place and not at the teacher's desk or by avoiding direct competitions with other classmates.

It is also very useful to let the child practice a playful-sporting activity to your liking, that relaxes him and does not make him feel too visible: perfect for example swimming, naturally non-competitive, yoga, drawing and painting. In any case, it is necessary to avoid too tight rhythms of the various activities, leaving space for relationships. Finally, it is essential to reassure him, joke about it together and play down ".

When to take the baby to the doctor?

It is generally recommended to wait a few months before seeking medical attention, but hardly a mother can wait so long! In the first instance, then you can talk about it with the pediatrician, who will first of all reassure both the child and the parents and will try to identify any reasons for discomfort that may have triggered the tic, to try to remove them. Sometimes this approach is enough to significantly reduce the frequency and extent of the tic until it disappears.

"Only if the disorder does not subside within a year, it is advisable to visit a child neuropsychiatrist" advises Dr. Tripodi "who, by examining the child and analyzing the clinical history, will be able to exclude any pathologies (for example Korea of Sydenham, a complication of rheumatic disease that can develop following a Streptococcal infection) and evaluate the opportunity for pharmacological treatment associated with psychological support, which will help the child to manage and overcome his disorder and the family to live such events more serenely ".

add a comment of Tics in children: how to behave