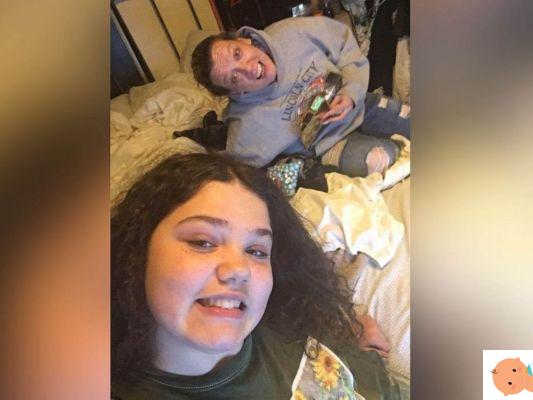 We know that social media are often at the center of the discussion when it comes to adolescents and pre-adolescents, therefore of that age group between 11 and 18 years. Although many platforms would theoretically be banned under a certain age, the ease of access and use that kids have is increasingly worrying parents and experts. Lately, it seems like a new trend has come up Tik Tok: facial injuries video and other bruises.

All for a trend

They are called trends, that is, those videos born on Tik Tok but in reality now widespread also on other social networks such as Instagram, in which the same part is always "played". In practice, the same video, with the same music, is repeated endlessly in a competition to see who plays it best and becomes viral. Apparently, one of the trends lately would be showing the result of a desperate crying.

But beware: these are not those videos in which a filter is applied to simulate crying (with runny make-up), but real grooves on the cheeks.

Read also: Smartphone addiction and teenagers: 5 tips to keep an eye on them

Pathomimia: when a wound passes for spontaneous

Doctor Luigi Laino, a dermatologist, explains that many girls between the ages of 12 and 15 have come to him with deep excoratory lesions of the face, in particular of the guance, most likely self-inflicted. After reporting the diagnosis to the parents, the parents checked the i social, thus discovering this new trend.

According to the doctor, it could therefore be patomimia, a disorder that leads to mystify a skin lesion that was actually caused by the patient himself for the sole purpose of passing it off as spontaneous.

What to do if self-harm is suspected

We do not yet know if it is a widespread or limited phenomenon: schools are still talking about it, even if the news has already started to circulate a year ago. However, it is good to pay attention to content to which their children have access, especially if they are particularly young. If you notice wounds strange on boys' bodies, especially in areas where it is more rare to get injured, talk to a doctor.

Social media should not be demonized but children, especially younger ones, must be followed. Some experts even recommend a control of phones (in the sunlight), but the most important thing is to talk together about what you can find on the internet and how to protect yourself, not only from malicious people but also from certain contents.

TAG:
TikTok explained to parents: here's how it works ❯

add a comment of Tik Tok: Watch out for videos showing facial injuries