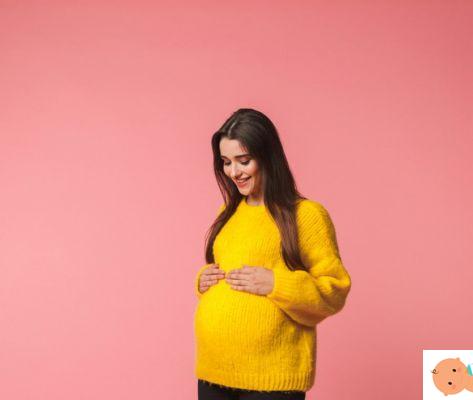 La tint in pregnancy is one of the issues on which future mothers struggle the most: there are those who, since taking the pregnancy test, say goodbye to every treatment at the hairdresser, those who read the labels more carefully to see what is inside a dye and who continues to do everything as before. But what is really the right thing to do?

Dye in pregnancy: can it be done?

The issue is dealt with in detail in the book The hidden science of cosmetics (Chiare Lettere, 2022) by the popular science writer. Beatrice Mautino, biotechnologist by training. Which answers the dry question like this:

"The decision to dye or not during pregnancy must be made by the expectant mother by evaluating the risks, minimum, and the benefits that vary from person to person. It is not easy, but as always there are no simple solutions to very complex problems".

Disappointed? Don't worry, because always in his book (as well as in his stories on Instagram and in his Youtube channel), Mautino also provides a series of useful information to orient himself on the subject and, in fact, make a decision.

The starting point is that dyes are very particular cosmetics because by nature they are extremely complex. To begin with, they are grouped into three categories:

They are the ones found on the shelves "in the form of cream or spray with definitions such as wash-out. They are the classic dyes that are done during carnival or when you want to try a slightly extreme color without having long-term consequences", he writes. Mautino. These dyes color the hair from the outside and therefore last a few or very few washes, gradually losing color.

They are colors that go deep into the hair structure, coloring it from the inside and therefore last a long time. They are more complicated than temporary dyes, because they predict them to happen chemical reactions both within the coloring mixture and in our hair. To understand how they work, just refer to the permanent dyes that we can buy at the supermarket for DIY ink and which contain three bottles:

L'ammonia (or similar) is essential for permanent dyes, because it is the substance that allows the flakes that cover the hair to open, allowing dyes to enter. And also thehydrogen peroxide it is, because it orchestrates all subsequent chemical reactions between the dye precursors. Finally, the restorative treatment is basically a conditioner with an acid pH, which helps to make the scales that cover the hair close well, making it beautifully shiny and preventing any dye from escaping.

As the word says, they are not permanent, but they last a little longer than the temporary ones, usually about twenty washes or a little more. "They are characterized by a lower concentration of hydrogen peroxide, by the absence of ammonia replaced by less aggressive analogues and by the presence of direct dyes".

What mothers fear, of course, is that some substance contained in the tinctures will pass to the fetus, causing developmental problems.

"From the point of view of safety - writes Mautino - all the ingredients used in the tinctures sold legally on European soil have passed the reproductive toxicity tests, therefore they are considered safe even in pregnancy and, barring allergies to certain ingredients, there are no specific limitations to components to avoid ".

About the allergies, in fact, Mautino recalls that most of the dyes used in dyes (attention: even in natural ones) are allergenic, that is, they can trigger allergic reactions in predisposed subjects. For example, paraphenylenediamine and resorcinol are, and this is why an allergy test is always recommended, applying a small amount of coloring mixture to the skin 48 hours before making the color.

With regard to safety in general, however, it should be considered that dyes are more complex products than most other cosmetics: although the safety of each single authorized dye has been assessed, there are still some open questions related to the interaction between the various ingredients.

For this many gynecologists actually advise against dyeing your hair while pregnant or breastfeeding, applying an extreme version of the precautionary principle. Others, however, advise against doing it at least in the first trimester, when the embryo's organs are formed. Still others recommend using products free of the substances most at risk, especially from the point of view of allergic reactions, such as ammonia, paraphenylenediamine and resorcinol: however, it should be emphasized that to be truly certain of the absence of these substances, you must read the labels very carefully. and that the colors that do not have them will not be permanent.

There are no specific indications from the Ministry of Health of the Country on the matter, but on the website of the English Health Service (NHS) it is reported that the greatest risk for the use of dyes in pregnancy is linked to the inhalation of high doses of chemical substances present. in the colors. However, we are talking about enormous doses compared to those breathed in by a woman who is dyeing her hair. "

Henna in pregnancy: yes but with caution

Henna is often considered absolutely safe and harmless simply because it is natural. In reality, as always, things are a little more complicated than that. For a start it could cause contact dermatitis.

Not only that: as Mautino explains in his book, the plant from which henna is obtained contains a molecule (lawsone) that has a certain toxicity. It doesn't mean it shouldn't be used, but that must be done carefully and not with the lightness that we often reserve for products just because they are "natural". Also in this case, therefore, better not to overdo the quantities and shutter speeds and rely on serious producers.

How to dye your hair safely

So here are the advice of the English NHS for a safe do-it-yourself dye:

We add the recommendation to choose quality products, not bought at random on some stall and of dubious origin.

Finally, it should be remembered that during pregnancy the hair undergoes structural changes so they could react differently than usual to a dye that has already been used.

In short, overall the risks of dyeing during pregnancy seem really minimal, but since they cannot be completely excluded, it is good that each one makes its own evaluation with respect to the benefits that would derive from it.

See also our series of articles on Beauty in Pregnancy

Can streaks and highlights be done?

The bleaching cream is not placed on the skin, so it does not enter the circulation. It is true that there is also absorption through the hair shaft, but it is a very low penetration compared to that which occurs through the follicle, which is already minimal.

How long does the ammonia-free dye last?

By definition, dye without ammonia (or substances with a similar action) cannot be permanent.