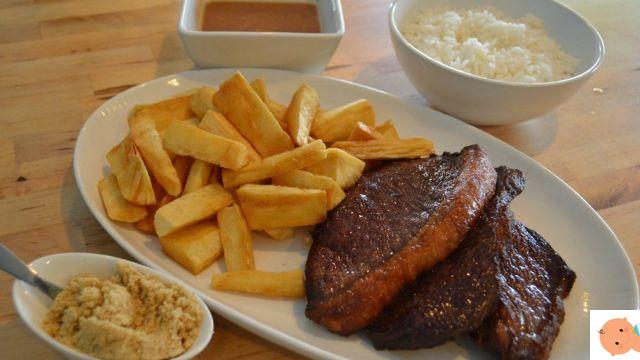 The feeding of the child between the first year of life and three years is a swing of trial and error to understand the tastes of the little one and to widen the range of foods in his daily meals as much as possible. Eating healthy is a habit that is learned as a child, but character, whims or simply tastes do not allow some parents to integrate new foods or simply to standardize meals for the whole family. Make children eat healthy with meat for example, it is often a challenge like that for vegetables: even the most appetizing dish fails to attract the attention of the little one who, on the contrary, when he sees meat in any shape on the plate, begins to have tantrums, to whirl his head if he is small or to push away the dish as a gesture of refusal.

The Mediterranean diet, queen of the healthy diet for the whole family, includes a great variety of foods that also include meat and fish in the protein family. For those who have chosen to carry on this type of diet, a child who does not eat meat can become difficult to manage. So here are some little tricks to help them appreciate it.

Read also: The Mediterranean diet is GOOD. Here because

To make children eat meat, why do they refuse it?

Let's start by saying that there is no rule, each child is unique. And so too every mum and dad, who have ways of doing and a personal approach to food which, of course, is transferred to family habits. In some cases, such as selective feeding, the child chooses to eat certain foods while carefully avoiding a long list of foods. Parents enter a spiral that endorses this habit "just to see him eat". Although around the age of two the neophobia, that is the fear of the new, can be closely related to food but also to the family environment, as the research "Food neophobia in children and its relationships with parental feeding practices / style" published in Woodhead Publishing Series in Food Science suggests. Technology and Nutrition. It is often physiological and should not cause concern, whether it is aimed at a food such as meat, or whether it involves the child's interest in a small list of foods.

Children who do not eat meat in this age group they can find various limits in this food. The first, obviously not to be underestimated, is a question of taste: Studies on the preferences that children have as infants have revealed that they are determined to show what they like and what they don't even when they still can't speak. Other reasons why babies don't eat meat? Its consistency, the little variation on the theme (when for example a parent always proposes it in the same way).

If the child does not eat meat, is he having a tantrum or not?

Many parents take the hard line and force their child to eat meat unwillingly because they believe it is a sterile whim with no foundation. The child would "get stuck" not to eat the meat when he sees it on the plate without any base (taste, texture or dish he doesn't like). In some cases, especially around the Terrible Two, that can certainly be the case. In others, however, it is good to evaluate the behavior of the child because forcing him to eat meat can lead to more serious disorders (such as those of selective feeding that can continue even in adolescence).

Tips and tricks for making children eat (and enjoy!) Meat

A first step to change the family habits with respect to the consumption of meat is to vary. This means that perhaps the child around 3 years old sees the slice of veal carpaccio on the plate, immediately recognizes it as "meat" and rejects it a priori for various reasons. Insisting does not usually lead parents to see their intention of integrating meat in their child's diet fulfilled. Indeed, as we have seen, this attitude can even make the situation worse.

Among the tips and tricks that we have collected to help children appreciate meat there is one that is also valid for vegetables: disguise it. Give it a new look, offer it in ever new and original versions that become interesting for the child as they are new. At the base of these tips there is only one: better do not speak in front of the child of his I decline. Discussing it between mom and dad and trying new tactics in which the whole family is involved is the way to help the child accept the news when he or she may not be inclined to do so.

Main courses of meat for children

A grilled slice topped with a little apple puree that sweetens the dish and makes it more delicate on the palate of children, even the smallest ones.

Chicken and potato patties without eggs

Once the chicken is boiled, it is blended and then mixed with a mashed boiled potato and grated cheese. After having breaded in breadcrumbs, they are placed in a pan with a drizzle of oil and cooked at 200 degrees in the static oven for about 15 minutes.

This too can be made without egg, with a light breadcrumb coating or breadcrumbs and baked in the oven. The extra touch is to add a little granular garlic and grated cheese to the breading so it will be tastier.

Prepare meatballs with minced veal, they can be decorated with colored purees according to the child's tastes: green with spinach, orange with pumpkin or carrot, yellow with potato. So as to make the dish more fun, different from the usual.

Fonti per l'articolo: Woodhead Publishing Series in Food Science, Technology and Nutrition, "Food neophobia in children and its relationships with parental feeding practices/style2

TAG:
Tricks to get the child to aerosol ❯

Children and sports, what their snack should be like

Children who do not want to eat, we talk about it live