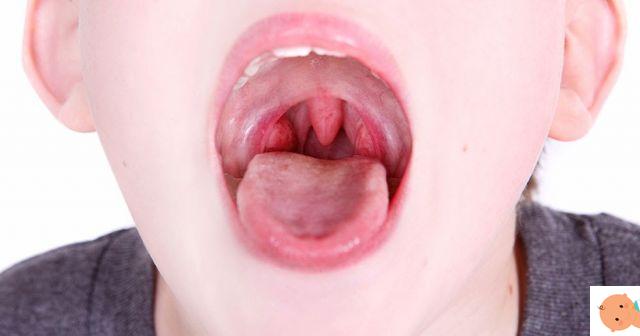 The tonsils act as 'sentinels' of the throat defending the body from infections, limiting or preventing its penetration into our body. In children between the ages of 4 and 8 it is not uncommon for tonsils to be swollen, but what does this enlargement really mean? We asked Dr. Massimo Ralli, specialist in otolaryngology.

The function of the tonsils

"The tonsils, which are part of theWaldeyer's Ring, are made up of lymphatic tissue and play a central role in defense of the upper airways in children. The tonsils, in fact, protect our children from possible microorganisms present in the air and in food, and therefore represent one of the most important components of the immune defense system of the upper airways ".

Up to the fourth year of life the child's tonsils increase their volume to defend it from infections, for this reason their growth is completely physiological. Between 4 and 8 years instead iThe volume of the tonsils stabilizes. "With growth - explains Dr. Ralli - the tonsils undergo a progressive reduction of their volume and function".

Many do not know, but there are three types of tonsils:

When abacterial or viral infection affects the palatine tonsils, the child may encounter one tonsillitis.

"Tonsillitis is a bacterial or viral infection of the palatine tonsils viral tonsillitis, by far the most frequent, are caused by Adenovirus and Rhinovirus. The bacterial tonsillitis instead they are often supported by the streptococcal family. "It often happens that the inflammation also extends to the adenoids.

"Tonsillitis - says Dr. Ralli - is very common in children and manifests itself with pain in the oral cavity and during swallowing, hypertrophy of the tonsils, congestion, swollen lymph nodes in the neck and often very high fever". Inflammation of the tonsils also causes a increase in volume and a characteristic redness of the mucosa due to increased blood supply; sometimes the pain extends to the ear, resulting in what is called reflex ear pain. In some cases, the tonsils can also become covered in plaque.

Other very common symptoms are:

"Treatment of tonsillitis depends on the cause. Le viral tonsillitis, which as we have seen are the most frequent, can be treated with symptomatic medications, or aimed at treating symptoms while waiting for the tonsillitis to resolve spontaneously within 7-10 days with the peak in the first 3 days. In these cases, local drugs such as spray, as well as non-steroidal anti-inflammatory drugs to be taken by mouth to relieve pain in the child. Also the paracetamol it is often used in these conditions ".

If the tonsils become enlarged

Sometimes the tonsils are enlarged even when there is no infection in place. Because? "Tonsillar hypertrophy can"chronicle", meaning the tonsils can remain large too in the absence of acute infection. This occurs in children and adults who suffer from repeated episodes of tonsillitis, often during the developmental stages of the immune system (for example during the first months of kindergarten) ".

The increase in the size of the tonsils can in fact be a result left by inflammatory processes that alter the basic structure, causing the child breathing problems and swallowing difficulties even after the inflammation has subsided. This is the case of infectious mononucleosis which leaves a tonsillar hypertrophy that does not necessarily regress with the end of the inflammatory process.

"Then there are some conditions, adds Dr. Ralli - in which the tonsils take on a" cryptic "appearance, that is, small tunnels are formed inside them that progressively fill with food and this induces a condition of constant tonsillar hypertrophy, with halitosis .

When intervention is needed

While a few years ago the tonsils and adenoids were surgically removed with great ease, in recent decades the surgeon's behavior has changed considerably, leading toremoval of the tonsils only in some well-defined cases. "One of the central elements that determines the surgical indication is the number of episodes of tonsillitis, or when at least 3 episodes of tonsillitis occur for 3 consecutive years, at least 4 episodes per year for 2 years or more than 7 episodes in a year "explains Dr. Ralli, just as indicated in the guidelines of the Istituto Superiore of Health.

"Other causes are problems with breathing, with obstruction of the airways especially during sleep, thus causing repeated apneas (a condition called Syndrome of APNEA obstructive sleep) ".

It is advisable to contact the specialist when theadenotonsillar hypertrophy is accompanied by a respiratory disorder, with the onset of snoring and apnoic breathing pauses (obstructive sleep apnea syndrome - OSAS), especially if they occur in early childhood, since it is possible that the respiratory distress may over time produce significant cardio-respiratory fatigue.

The OSAS, in fact, is characterized by the presence of a ccomplete or partial obstruction of the airway, which determines a decreased oxygenation: in this case breathing becomes so laborious that sleep must necessarily be interrupted by micro-awakenings that make the muscles regain their tone and improve the opening of the airway. In children, OSAS can cause poor growth, cardiovascular, learning and behavioral problems.

Tonsils, fewer problems over the years

As the child grows, the inflammations of the tonsils tend to progressively reduce, and this is precisely because, thanks to the frequency of inflammatory episodes, the child acquires the cimmunological competence which will allow him to get sick less and less.

As regards the volume, there is no real tonsillar volumetric reduction, but a sort of modification of the relationship between the tonsils and the pharyngeal space, which progressively grows together with the child.

Less tonsillitis thanks to probiotics

If your child is often prone to pharyngo-tonsillar infections, then it may be helpful to get them to take supplements based on Probiotics. Yes, the probiotics much used for the well-being of the intestine are actually also useful for preventing infections of the upper respiratory tract. This is also demonstrated by a scientific study carried out by a research team from the University of Tor Vergata and the University of the city, conducted just a few years ago. According to the researchers, taking probiotics in the pediatric population would help reduce the incidence of oral and respiratory infections. This is because probiotics help keep the oral microbiota in balance which, just like the tonsils, has a defensive role against potential viruses and bacteria that can infiltrate our body.

However, not all probiotics are the same. One strain in particular, Streptococcus salivarius, proved more effective than others in prevent infections of the tonsils and pharynx. According to a study published in the International Journal of General Medicine, taking a Streptococcus salivarius K90 supplement regularly for at least 12 days would reduce the use of antibiotics by an overall improvement of the quality of life of the children.

TAG:
The "Monchhichi" are back, from today the new animated series ❯

add a comment of Tonsils and children, let's clarify the main doubts