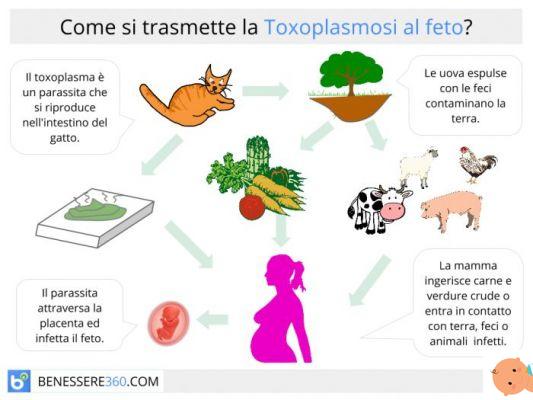 Toxoplasmosis is an infection caused by a microorganism called Toxoplasma gondii. In the vast majority of cases you don't even realize you have had it, because it gives symptoms mild and general, such as tiredness, headache or throat, feeling of "broken bones". Once contracted, it leaves a permanent immunity, that is, there is no more risk of getting sick. The problem, however, is that if taken during pregnancy it can be very dangerous for the baby, as it can pass to the fetus via the placenta. The current state there is no vaccine against toxoplasmosis.

There are mild and generic. Often you don't even realize you have had it.
You can try:

2) What are the risks for the baby?

If the mother contracts the infection during the months of pregnancy, the fetus does not necessarily get infected. But if this happens, the damage can be greater the earlier the infection occurs.

"Fortunately at the beginning of pregnancy it is difficult for toxoplasma to reach the fetus, but if this happens, the risks can also be serious: for example, spontaneous abortion, malformations, damage to the central nervous system that can lead to mental retardation or epilepsy or eye injuries that can cause blindness ”explains, head of the Obstetrics and Gynecology Operational Unit at the Luigi Sacco Hospital in our city and Professor at the University of our city. "Conversely, towards the end of pregnancy the passage through the placenta is easier, but at that point the possible risks are less".

To know if you are immune or sensitive to infection, a simple blood test is enough to detect the presence of antibodies against toxoplasma. The test can also be performed before conception, or as part of the first battery of tests that is recommended to the mother at the first visit of the pregnancy. If the woman is immune, she can rest easy for the full nine months and there is no need to repeat the test.

Otherwise it can be susceptible to infection if you have never contracted it (in this case the test will have to be repeated every month), or at risk of passing it on to the fetus, if you have contracted it during pregnancy. The examination is charged to the NHS for all the months of waiting.

The toxo-test searches the blood for the presence of specific antibodies (called immunoglobulins) against the parasite. In particular, two types of immunoglobulins are sought:

How to read the results of the toxo-test

In the event that the infection is confirmed, the so-called can be performed greed test, that is, a blood test that allows you to know if the infection occurred in the previous three months or even earlier, and therefore to understand if it was contracted when the pregnancy was already in progress.

If toxoplasmosis was contracted during pregnancy

If that's the case, to know for sure if toxoplasma has actually crossed the placental barrier and infected the baby it is necessary to perform aamniocentesis, which allows to highlight the possible presence of the microorganism in the amniotic fluid.

“If the mother contracts toxoplasmosis in pregnancy, she immediately undergoes one antibiotic therapy which reduces the risk of transmission of the infection to the fetus and which, if transmission has already occurred, reduces the risk of serious consequences ”explains the professor. With the current treatment options, at least 90% of babies who contract the infection in utero are born without obvious symptoms.

6) How to avoid toxo

The infection can be contracted only if you ingest the parasite, which can be present in the meat of infected animals, in cat feces, in the soil in which an infected cat has defecated and on fruit and vegetables (possibly contaminated by feces or soils in turn infected). Here then are the precautions to be taken to avoid contagion:

They are the first at which the finger is pointed, but in reality it is really difficult for a domestic cat (always lived in the house and not previously stray) to contract toxoplasmosis and transmit it to humans. Unless, of course, he goes into the garden and comes into contact with contaminated soil.

The problem, however, is limited to faeces and therefore to the litter box: for an extra precaution, it is recommended have other family members clean it or wear gloves and wash your hands with soap and running water at the end of the cleaning operations. "However, it should be noted that the parasite's cysts hatch about 2-3 days after the deposition of feces, at an ambient temperature of 24 ° C and high humidity," he says. "So the risk of contamination is greatly reduced if the litter is cleaned every day."

Pregnancy: cat, dog and other pets


There is a baby on the way, how to prepare the pets for his arrival? It starts with a visit to the vet for everyone and then with a little education. Already during pregnancy you should teach your dog (or cat) to stay away from the crib, baby bag or changing table. In the same way, however, the dog (or cat) must be ensured a kennel in a place that the child will not be able to reach.

Sources for this article: web page of Epicentro (Higher Institute of Health); consultancy by, head of the Obstetrics and Gynecology Operational Unit at the Luigi Sacco Hospital in our city and professor at the University of our city.

Toxoplasmosis in pregnancy, the testimonies of mothers

Be positive on the toxo test. Anxiety, worry: will the baby in the womb be okay or not? We have collected the testimonies of mothers who discovered they contracted toxoplasmosis during pregnancy.

Headache in pregnancy: causes and remedies

add a comment of Toxoplasmosis in pregnancy: symptoms, values, what not to eat