Transitional milk: what it is and when it arrives 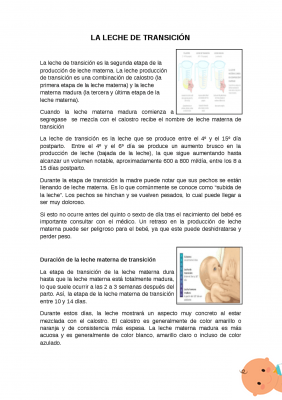 Transitional milk: what it is and when it arrives

Breast milk is, according to the World Health Organization, the best choice to feed a child and should be privileged in the absence of particular problems. Obviously, every woman decides for herself and her child, but there is no doubt that the breast milk is the best option in terms of composition. This is also because, unlike formula milk, maternal milk changes according to the needs of the growing child. The transition milk it is just part of these changes.

The reason why the breast milk is considered perfect for i Infants it is precisely the fact that it changes with the child, developing with and for him. It seems incredible, yet the mother's body is "programmed" to produce a type of milk that changes with the same progression of breastfeeding: the XNUMX cups milk which feeds a neonate of a few hours is very different from that of the milk supply, but also of what the baby sucks at 3 months or one year.

La mother begins to produce milk after childbirth, when thanks to sucking oxytocin and prolactin work to send impulses to the brain to produce XNUMX cups milk. But how does breast milk change? Basically, it is divided into three types of milk:

In the first few days after birth, therefore, the baby sucks colostrum, a thick and yellowish liquid, rich in antibodies, vitamins, minerals and very digestible. It is right through the colostrum that the child is full of energy and takes the immunitary defense of the mother. The definitive milk it is instead what comes when breastfeeding is well under way.

In the middle is precisely the transition milk.

What is transitional milk

When you are talking about transition milk, therefore, we speak of the first milk after colostrum, what comes with the mountain, between the third and the tenth day after the delivery. It is a very abundant milk, whitish in color, very watery, balanced like a real meal. This is what the neonate for the first few weeks of life.

Why transition milk is important

As the colostrum, also the transition milk it is very important, especially since it is able to change composition even within the same day! It is as if this XNUMX cups milk it was developed by a laboratory that analyzes the needs of the little one and then produces his tailor-made meal.

Transitional milk contains everything a baby needs, but the amount of fats, proteins, vitamins, immunoglobulins changes as the baby grows, because it acquires more and more immunitary defense.

In practice, at the beginning the XNUMX cups milk is very rich in protein, which allow the child to grow, while over time it becomes richer in fats, essential for energy. During the breastfeedingon the other hand, milk is initially more watery and sugary, therefore thirst-quenching, and towards the end richer in proteins.

Read also: Going back from infant formula to breast milk: I succeeded!

Il transition milk it's that kind of breast milk which arrives after the colostrum, around the third / fourth day after birth, and which is produced for about the first month of the baby's life, before definitive milk, the mature one, which will accompany the little one for the entire duration breastfeeding.

Benefits of Breastfeeding: What to Know

TAG:
Milk and dairy products in the children's diet ❯

add a comment of Transitional milk: what it is and when it arrives