Trichotillomania: why do children pull their hair? 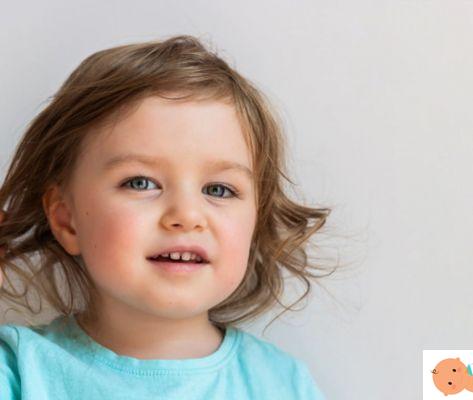 Is called trichotillomania and it is a type behavior disorder obsessive-compulsive which is characterized by the impulse to pull and pull out your hair from the scalp. To find out what the causes and risks may be, we turned to Giovanna Busto, psychologist and transactional analyst psychotherapist.

1. The causes of trichotillomania

"Trichotillomania is a disorder linked to an emotional tension that the child feels and does not know how to manage and that tends to channel in the act of pull out your hair.

The anxiety that the child feels may be due to aemotion that he deems not socially accepted, in particular from mum and dad: only by carrying out the act of pulling out his hair can the child feel a sense of relief and respond to a condition of discomfort such as stress, fear, or frustration ».

2. How trichotillomania manifests itself

«Often you start by rolling your hair slowly, then pulling it: this allows the child to lower the voltage, to find the consolatory modality that he is unable to receive from the parent.

In fact, one of the most frequent causes of this disorder is the child-parent relationship: mothers and fathers who are not very empathic or unable to decode or accept the emotions of the child end up by reprimand it in manifesting.

Trichotillomania can manifest itself as a slight tic, for example caressing the hair with the hands, up to much more serious forms: there are children who arrive even to tear and eat their own hair, thus causing intestinal blockages which can only be answered with an intervention ».

3. At what age does it start

«Emotional recognition in children, in terms of the evolution of self-awareness as an agent and of the environment, begins as early as 10-24 months.

Trichotillomania can manifest itself in a particular way from that moment up to 6 years. Sporadic episodes may occur, which do not always result in a disorder.

However, if there is continuity, the disturbance can recur between 10 and 12 years, in the period of puberty and adolescence which represents a moment of emotional explosion and change ».

4. The risks of trichotillomania

"The objective fact to which trichotillomania leads is undoubtedly thealopecia, that is, hair loss. In fact, the tear occurs by pulling the hair from the scalp and this leads to the formation of gaps in the head, or even scars that cause shame on the part of the child.

In the long run, this situation can cause problems especially from the point of view ofesteem and consequently it can lead to states of shame and depression ».

5. What to do: the remedies

«Talk to the child is the first move to make.

The disorder arises from an inability of the child to express emotions, so it will be important that the parent gives "permission" to the child to show them openly, explaining, for example, that even mom and dad get angry or have certain sensations. When the parent finds the child in the act of pulling out his hair, she must immediately intervene trying to calm the moment of tension, understanding what caused it, decoding the child's emotions. It may also be important to explain the consequences of the gesture to him, to make him understand how harmful it can be for himself ».

Relieve the stress in the other

A trick to avoid pulling your hair can be that of give the child a pen or soft object, also made of soft toys, with which to vent one's stress: «it will become a way to communicate to the parent his state of tension, but without performing self-harm gestures. Also in this case obviously parents will still have to pay attention and talk to the child, helping him to let off steam every time they see him, for example, playing with the ball or the anti-stress toy ".

If the problem persists, it will be essential to activate a psychological intervention involving the family: «the family unit must learn to work on emotional management in its entirety. The parent does not have to be blocking towards the child, but allow him to express all emotions, good and bad they are. Therapy means softening the family's "script patterns" and healing the problem areas that cause problems for the child. It is then necessary to work on the child to teach him to bring out his emotions and find new ways to channel stress and anxiety, not necessarily by making a gesture of self harm like pulling your hair out. "

Read also: How to improve children's self-esteem TAG:
Trisomy 18 or Edwards Syndrome: what it is and how it manifests itself ❯

add a comment of Trichotillomania: why do children pull their hair?