Trisomy 18 or Edwards Syndrome: what it is and how it manifests itself 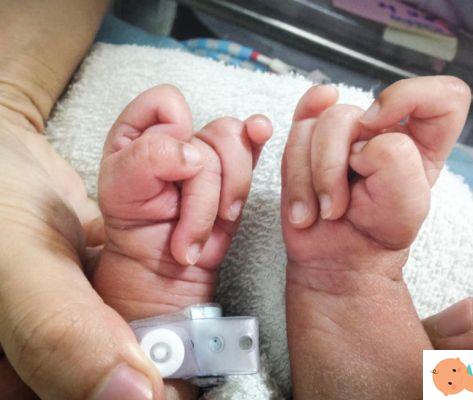 Trisomy 18, also known as Edwards syndrome, from the name of the physiologist who described its characteristics, is a chromosomal abnormality that affects approx one child for every 6-8 live births. Unfortunately, this anomaly has serious consequences on prenatal development, causing in most cases the stillbirth of the fetus. Let's see in detail what it is, what are the causes and how it can be diagnosed.

Trisomy 18 and other chromosomal abnormalities

Chromosomal diseases are caused by abnormalities of the chromosomes, which may have undergone one change in number or structure. Chromosomes are rod-shaped structures contained in the nucleus of our cells and have the task of storing and transmitting genetic information from parents to children.

In the human species the number of chromosomes is 46:

La trisomy 18 it is a numerical anomaly, in the sense that illness derives from having three copies of chromosome 18 in each cell of the body instead of two. The presence of "extra" genetic material unfortunately causes serious problems in the development of the fetus, to the point that most pregnancies are interrupted before birth.

Among the trisomies, trisomy 18 and trisomy 13 (Patau syndrome) are the second and third most frequent polyploidy at birth after trisomy 21 (Down syndrome).

Read also: Chromosomal anomalies, what are they?

In Edwards Syndrome the extra chromosome 18 is present for one chromosome separation error, the cause of which is still little known today. As specified by the Istituto Superiore di Sanità, in most cases the anomaly is of maternal origin: the paired chromosomes did not separate correctly during meiosis of the maternal gamete (oocyte). For this reason, when the maternal and paternal gamete merge in conception, the embryo will have an excess of chromosome 18.

The frequency of maternal nondisjunction defects responsible for trisomy 18 and other chromosomal abnormalities correlates with the age of the woman and increase with age.

How trisomy manifests itself 18

Trisomy 18 is a disease characterized by severe mental retardation and growth retardation both before and after birth, malformations of the skull, limbs and internal organs.

In particular, we find:

Others signs and symptoms that may occur are:

La severity of signs and symptoms of the disease also depends on the type of form of trisomy 18. Edwards syndrome, in fact, can manifest itself in three different forms.

The different types of Edwards syndrome

There are 3 types of trisomy 18 and are classified according to the severity of symptoms:

A possible trisomy 18 can be suspected already during the first control ultrasounds since the fetus has very evident anomalies. For diagnosis, it is necessary to perform the combined test, which is usually done between the XNUMXth and XNUMXth week of pregnancy and which calculate the possibility that the child has this syndrome. If the examination shows that the possibilities are high, the doctor will recommend performing a more in-depth examination that involves the analysis of a sample of the baby's cells, then a CVS or an amniocentesis, traditional invasive investigations.

Today the fetal DNA test is also widely used, a non-invasive screening test that analyzes a sample of the fetus DNA obtained from a simple maternal blood sample. This type of examination is performed starting from the tenth week of gestation, but it is always a probabilistic test. As all the main scientific societies point out, every positive result must be confirmed with an invasive investigation (amniocentesis or CVS).

Read also: Combined test (duo test or bi-test): what it is, when to do it, how to read the results

The prognosis of Edwards syndrome is unfortunately not favorable, although there are cases of children with trisomy 18 who survived to adolescence. Studies have shown that over 95% of affected fetuses die in utero. Of those born with trisomy 18, more than 50% die in the first week of life and less than 5% reach the year of life; only 1% reaches the age of 10. For reasons not yet known, the survival rate is higher in females than in males.

There is no specific therapy for trisomy 18. If the baby is born alive, in fact, what doctors can do is try to reduce the symptoms and manifestations of the pathology, such as infections and heart defects. Also, if the baby has difficulty feeding, artificial feeding will be necessary. Movement difficulties and changes in muscle tone are mainly treated with physiotherapy.

After discharge, the child must be followed up at the Follow-up Service (Society of the Paesena of Neonatology) to periodically check their health conditions, to support neuromotor and neurodevelopmental development as far as possible and to offer any psychological and social support. to the family. In aid of families with children suffering from Edwards syndrome there is also the Association of Families (SOFT Association of the country).

add a comment of Trisomy 18 or Edwards Syndrome: what it is and how it manifests itself