Trophoblast: what it is and pathologies 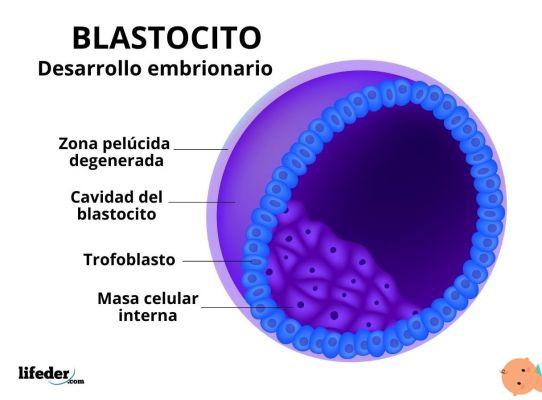 Trophoblast: what it is and pathologies

One of the first key events that occur in early pregnancy is the development of trophoblasts area of blastocisti. What is the trophoblast what if there are any anomalies in the first weeks of pregnancy?

What is the trophoblast?

Il trophoblast it is the peripheral cell layer of the ovum, consisting of small protuberances called wild corial, which forms from the fifth to the seventh day after conception, when the egg is in the blastocyst stage.

More specifically, trophoblasts are the precursor cells of the placenta and appear for the first time four days after fertilization as the outer layer of the blastocyst cells. When fully developed, the placenta serves as an interface between the mother and the developing fetus.

I placental trophoblastsInstead, they are critical to a successful pregnancy because they mediate key steps such as implantation, the production of pregnancy hormones, the immune protection of the fetus, the increase in maternal vascular blood flow in the placenta, and much more.

Formation of the placenta

Already three days after fertilization, trophoblasts - the main cell type in the placenta - begin to produce human chorionic gonadotropin (hCG), the well-known pregnancy hormone that ensures that the endometrium is receptive to the implanted embryo. In the following days these same trophoblasts attack and invade the uterine lining, initiating the pregnancy.

At that point the placenta begins to produce hormones that ensure a whole series of processes that ensure that the fetus receives the nutrients and oxygen necessary for its growth.

What happens after conception?

After a few days from conception, the embryo develops into one blastocisti, a spherical structure made up, on the outside, of trophoblasts (from which the placenta and outer membranes will develop) and, inside, from a group of cells called cell mass internal. The internal cell mass will transform into the fetus and eventually into the baby.

The implant is, therefore, regulated by a complex interaction between trophoblasts and endometrium: on the one hand, trophoblasts have a powerful invasive capacity and, if allowed, they would spread uncontrolled throughout the uterus; for its part, the endometrium controls the invasion of the trophoblast by secreting factors that act locally.

After implantation, around the eighth day after conception, the trophoblast is also responsible for ensuring nourishment to the embryo and, precisely from the trophoblast, the amniotic sac develops, consisting of an internal layer (amnios) and one external (chorion).
From the third month of pregnancy, the trophoblast is called placenta.

The trophoblast can also become the site of degeneration pathological, giving rise to a gestational trophoblastic disease (a proliferation of fetal trophoblastic tissue) such as hydatid mole or choriocarcinoma.

It is a form pre-tumor with benign outcome of the trophoblast.

What happens? The trophoblast continues to produce the Beta Hcg hormone even in the absence of a viable embryo. Often the hydatiform mole causes a spontaneous abortion in the first weeks of pregnancy which leads to discover the cause through a histological examination.

Choriocarcinoma of gestational origin is a rare malignant tumor that usually forms after a hydatiform mole. It occurs with abnormal blood loss in the uterus and in most cases is treated with surgery and chemotherapy.

There are also other pathologies related to the trophoblast such as:

I symptoms which may make one suspect trophoblast anomaly and which require an immediate visit to the specialist are:

TAG:
Thrombophilia and thrombosis risk in pregnancy: everything you NEED to know ❯

add a comment of Trophoblast: what it is and pathologies