True node of the umbilical cord: what it is 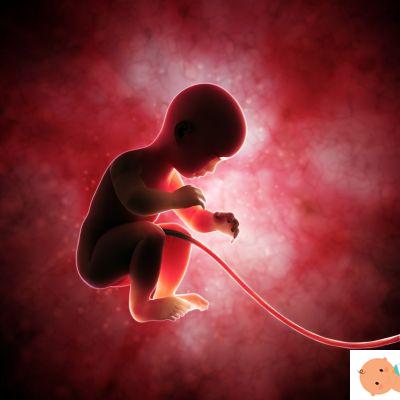 The umbilical cord knot is one of the many fears of expectant mothers. The fortunately, its risk is very low and should not worry mothers, as explained by Dr., gynecologist.

TRUE AND FALSE NODE OF THE UMBILICAL CORD: WHAT IT IS AND HOW FREQUENT IT IS

"The true knot of the umbilical cord is a extremely rare condition, found in 0.3-1.3% of pregnancies - ensures -. This is an anomaly that must be absolutely distinguished from the so-called false knot of the umbilical cord that, despite the name deriving from its appearance, it is not a knot but a condition deriving from the notable spiraling of the cord, more pronounced in some fetuses than in others, or from the varicosity of short sections of the cord vessels ".

Read also: Umbilical cord and umbilical blood: everything you need to know

TRUE NODE OF THE UMBILICAL CORD: THE CAUSES

There is no precisely identifiable origin for the formation of umbilical cord nodes. «We cannot properly speak of causes in the formation of the true knot - explains the doctor -. Rather, we can identify a series of situations in which, reasonably, the conditions for the formation of the knot are created: the polyhydramnios (the increase in the volume of amniotic fluid) is one of them, as is the multiparità, that is, all those conditions in which greater mobility of the baby in utero is allowed, with the result that his somersaults could lead him to form a knot in his umbilical cord ».


Another circumstance that can be associated with the formation of a real knot is the case in which the cord is very long: this time it would be something intrinsic to the umbilical cord even in the absence of an increased freedom of movement of the fetus to determine the formation of the knot.

However, a single and unique message must pass regarding the fetal movements, that is, from the moment their perception becomes regular (which occurs variably between the late second trimester and the beginning of the third trimester), they are the most important indicator of the well-being of the fetus. So every mother who should feel her baby moving a lot inside her belly should not have as a first thought "let's hope a real knot of cord will form", but "how nice, if he moves like this my baby is fine!"".

IS IT POSSIBLE TO SEE A NODE OF THE UMBILICAL CORD ON THE ULTRASOUND?

Is it possible to see an umbilical cord knot at the time of the ultrasound? "Diagnosing a true cord knot is extremely difficult - continues the Gynecologist - because by its nature, its length, and its structure, the umbilical cord floats inside the amniotic fluid and follows the fetus in its movements and this leads it to assume shapes and positions for which sometimes the presence of a real node is suspected. Nevertheless, given the technical difficulty in its recognition and its low frequency, it is easy for it not to be confirmed at delivery, generating only unnecessary concern ".

Read also: How much does the fetus grow compared to the belly: the images

Let's clarify the possibility of fetal death due to a knot in the umbilical cord: "On the basis of the functioning of the blood vessels, without exception for those contained in the umbilical cord, the fetal problem deriving from the true knot would be due to the reduction of blood flow inside the cord at the site of the node - explains Dr. -. However, this alteration of blood flow is determined only in the case in which the knot is tightened, while almost all true knots are extremely lax and they represent an occasional element of confirmation after the afterbirth (ie the birth of the placenta) in a birth that took place in an absolutely regular way ".

«The scientific literature and the case studies that have tried to define the risk of stillbirth associated with the presence of the real crease nodes have not succeeded in their attempt. In fact, the results are conflicting, with some studies describing an increased risk for the fetus, while others have found no difference between babies who are born with a real knot in their cord and those who don't. The point is that studies that identify an increased risk to the fetus in the presence of a true cord node do not fully describe other conditions potentially associated with the fetal adverse event, with the consequence that it cannot be absolutely certain that that particular child did not make it because of the knot in his cord rather than for any other problem his or his mother that may have justified this event ".

add a comment of True node of the umbilical cord: what it is