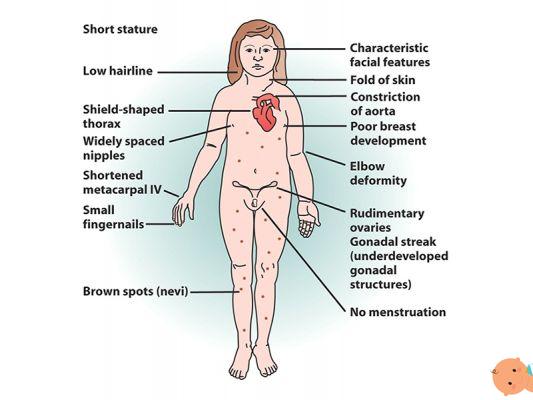 When we are expecting a child, the worry that something is not right accompanies us right from the positive test. Analyzes, ultrasounds, exams allow you to check the state of health of the fetus, but also after birth the thought of children's health it is always present. Sometimes, in fact, it is necessary to deal with rare diseases that are noticed even years after giving birth. This is the case, for example, of the Turner syndrome.

What is Turner Syndrome

La Turner syndrome it is a rare disease that affects one in 2000 newborns and is not hereditary. It is completely unpredictable, as it is a 'abnormality of the X chromosomes: each female person has 22 pairs of non-sexual chromosomes (called autosomes) and two X chromosomes; who has Turner syndrome has only one X chromosome or the second is partially truncated or does not have all the cells (mosaicism).

So Turner Syndrome affects embryos of female gender, which do not develop both X chromosomes correctly, but it is not hereditary and cannot be predicted or prevented, it is completely coincidental. In fact, it is thought that the "fault" lies with the spermatozoon, which at the moment of fertilization is damaged or devoid of an X chromosome.

It is not an identifiable disease before birth and, in some cases, its discovery occurs as early as school age.

They are different Turner Syndrome Symptoms which can lead to a diagnosis of the disease from the very first days of life.

Sometimes Turner Syndrome is already identifiable at the birth thanks to the presence of lymphedema on the hands and feet, on the short neck with a lot of skin, on the very low hairline, on the broad torso and on the nipples very far apart.

In other cases, the Turner syndrome it is discovered later. Around the age of 4-5 there growth slows down considerably and skeletal problems become more evident, with various types of malformations such as dental anomalies, shield chest, Madelung deformity and in general skeletal dysplasia. The eyes are also often affected by the disease, with hypertelorism, lateral nystagmus and eyelid ptosis.

Other symptoms of Turner Syndrome affect him instead organs. Many people with this disease can have it kidney changes such as horseshoe kidney or agenesis (absence) of a kidney, or again cardiac abnormalities such as bicuspid aorta, mitral prolapse or aortic coarctation. Often symptoms of this type, which affect vital organs, alert from the first days of life and lead to a diagnosis in a short time.

Le girls with Turner Syndrome they do not develop puberty in most cases, due to the malfunctioning of the gonads (often inactive) and estrogen alterations.

Among the other symptoms attributable to Turner Syndrome there is a high predisposition to autoimmune diseasesi, chronic bowel diseases, frequent ear infections and serious dental problems.

How is Turner Syndrome diagnosed

Usually the diagnosis of Turner Syndrome it arrives already in the very first years of life due to the presentation of several of the symptoms described above. Many times already at birth, at first sight, evident anomalies are identified and we proceed with the tests. The only way to diagnose Turner Syndrome with certainty is the analysis of the karyotype, that is, a blood sample that has the purpose of making a complete study of the chromosomes.

Turner Syndrome may be associated with difficulties in recognizing thegender identity, precisely due to the lack of an X chromosome by an individual born of the female gender. One atypical sexual development, in which the girl struggles to recognize herself in a defined gender, is quite typical in many cases of people with Turner Syndrome. For this reason, from the moment of diagnosis, parents should combine a psychological path with medical treatment.

How is Turner Syndrome treated

Does not exist cure for Turner Syndrome, but the various abnormalities and associated symptoms can be kept at bay with medicine. Heart problems and other organ diseases can be treated with the surgery, such as aortic coarctation. To start the puberty growth hormone is given, and then girls can take it estrogen to maintain their female sexual characteristics.

The other problems and symptoms must be assessed from time to time and treated according to the provisions of the medicine for each pathology found.

Turner Syndrome is a rare disease that affects the embryos of female chromosome, which do not partially or fully develop one of the two X chromosomes. There is no cure, but life expectancy for those with Turner Syndrome is equal to that of the average population.

The complexity of gender identity development in girls with DSDs

TAG:
Feto-alcoholic syndrome: what it is, how to recognize it and how to prevent it ❯

add a comment of Turner Syndrome: Symptoms and Treatment