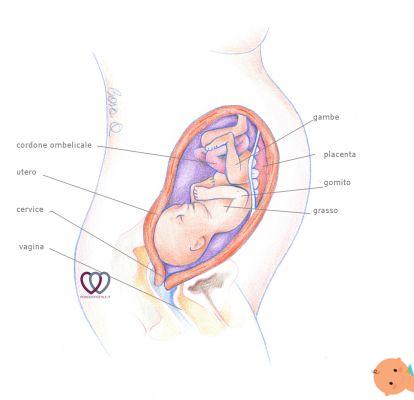 We move into the third trimester and the fetus is more active than ever. Here's what happens to your body and your baby during XNUMXth week of pregnancy. With the scientific advice from gynecologist Elisabetta Canitano, president of the non-profit association Vita di donna.

At this point in the pregnancy it is normal for the expectant mother garment weight (but without exaggerating). The obvious consequences, however, involve greater difficulty in movement - also because the baby in the orange continues to grow - and a lot more tiredness. Shortness of breath, heavy legs and constant sweating become common life companions for a pregnant woman during her last three months of pregnancy.

The scientific name for this ailment is heartburn. It is manifested by a feeling of discomfort and burning in the upper part of the stomach, sometimes associated with reflux. In pregnancy it is very common: a study conducted on 607 pregnant women showed that it affects 22% of future mothers in the first trimester; 39% in the second quarter and even 72% in the third quarter.

It is hypothesized that the problem is related to hormonal changes in pregnancy which interfere with gastric motility. It is also possible that the uterus increased in size go to exert pressure on the stomach, which favors the ascent of gastric juices into the esophagus: hence the burning.

Advice: it is necessary to talk to the doctor because it must be excluded that the pain felt is an expression of preeclampsia, of which it can, at times, be a symptom that is already late: perform the urine albumin dosage and blood pressure measurement it may be enough to confirm that it is instead a simple heartburn and not a much more significant problem. These tests can be done in an emergency room whenever there is any doubt.

To control heartburn it is best to eliminate all drinks that contain caffeine and hot spices; it is appropriate divide up the daily diet in frequent small meals (but this rule still applies in pregnancy); sleeping with your back slightly raised by a pillow; do not go to bed immediately after meals, but try to take a few steps or, in any case, to maintain an upright posture of the back. If the burning significantly worsens the quality of life, pharmacies can be usedi, which must be prescribed by the doctor. The medicines that can be used belong to the category of antiacidi, but it is up to the doctor alone to decide if and when it is appropriate to take them and possibly prescribe them.

While waiting for the birth, it may be time to prepare for the arrival of the baby by following some gods pre-birth courses or preparing a emergency suitcase for any eventual rush to the hospital.

Furthermore, from the twenty-seventh week it is possible (advisable) to undergo some tests:

The little one feels the sounds clearly: he jumps in response to a loud and annoying noise and lets himself be lulled by the voice of his mother. It also appears that he is starting to recognize dad's voice and that you appreciate music. Eyelashes have formed, the eyelids are partially open and it is not uncommon for the fetus to grab the umbilical cord.

It is now about 37 centimeters long and weighs almost a kilo: if it were to be born at the end of this week it would have a 'high probability of survival, thanks to the assistance of a Neonatal Intensive Care Unit. From this moment on, the probability of survival, without negative consequences for neurological and motor development, increases significantly from week to week.

How much does a baby weigh at 28 weeks of pregnancy?

How much does the fetus move at the XNUMXth week of pregnancy?

The baby is now very active, he turns around a dozen times a day and even grabs the umbilical cord.