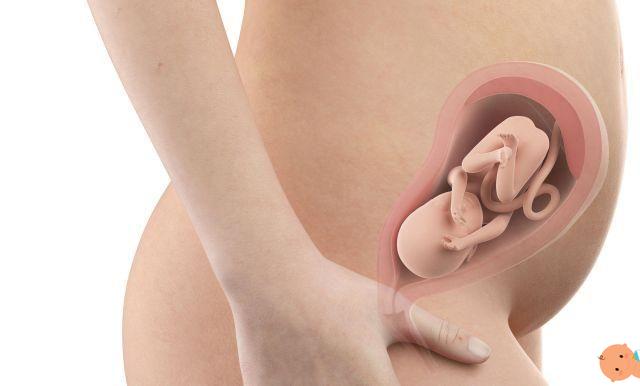 The sixth month of pregnancy is coming to an end and the little one perceives more and more the world around him. With the scientific advice of the gynecologist Elisabetta Canitano, president of the non-profit association Vita di donna, let's see what happens to the woman's body and that of the child during the twenty-fifth week of pregnancy.

Normally in this period the expectant mother does not suffer from particular symptoms, although fatigue e shortness of breath are now increasingly everyday conditions due to the constant weight gain of the fetus in the belly (which is also increasingly bulky).

However, minor ailments and discomforts are not rare due to the strong physical stress that gestation entails. The increase in size of the fetus, for example, slows digestion and can cause frequent heartburn or episodes of nausea after the meal. Also there back then it is subject to a greater load (and often to incorrect posture) and therefore could ache, especially in the hips and in the lumbo-sacral area.

Eat well to avoid stomach pain or gain too much weight

Eating properly is important in every moment of life. Let alone during pregnancy, when the mother's food choices can not only favor a excessive increase (or too small) Of weight as well as the onset of nausea e heartburn, but they also condition Health of the little one she carries in her womb.

In fact, during gestation the relationship with food it is one of the elements to be kept under control since the many fatigues of pregnancy can easily make one lose the balance of a correct diet in favor of too frequent "mistakes", if not real food abuse.

Advice: it remains crucial to maintain one varied diet, balanced, which does not provide portions too abundant (to abolish the old belief of "having to eat for two"), and composed of many small meals during the course of the day

Then avoid - or considerably reduce - the consumption of:

Finally, we recall that, according to the recommendations of the Health and Medicine Division of the American academies of science, technology and medicine, therecommended overall weight gain during pregnancy and of:

In anticipation of childbirth

The birth plan There are still 15 weeks to go to the end of the pregnancy, but it may already be time to think about Childbirth Plan or Birth Plan. The birth plan is already a tradition in some European countries (Spain, for example) but it is hard to establish itself here.

It is a simple sheet written and signed by the future mother, to be presented when entering the maternity ward to give birth, or a few days before. In this sheet, i proper to childbirth and the first care to be given to the child immediately after his birth. For example, you can write that you do not want an episiotomy, that you want to give birth in a crouch, and that you want to attach the baby to the breast immediately. These requests are authorized by both the indications of the World Health Organization relating to the rights of the parturient and the newborn, and the Del Paesena law of 2006 on the "protection of the rights of the parturient, the promotion of physiological birth and the safeguarding of the health of the newborn".

It must be said that some birth centers ignore this opportunity, but we must not be discouraged: coming up with your written requests, however, can be convenient. The document must have like recipient the head of the facility and the midwives who work there. In the document, you must indicate your personal details and the various requests, specifying that they are made because they are considered important in order to be able to face the birth of your child in a calm and conscious way. Before signing, it must also be added that you will not hesitate to follow the indications from doctors or midwives if they decide to intervene even breaking a request, considering it necessary for the health of the mother, the child or both.

Read also: Exams during pregnancy during the second trimester

Now the baby perfectly recognizes the mother's voice and her sound calms him. Under his skin i begin to form very first fat deposits which make his appearance more and more similar to what he will have at birth. The genitals are fully formed, the respiratory system is finishing (even the nostrils are starting to open) and the lips they become more and more sensitive, in order to be ready when after birth the breast is sought for breastfeeding.

At the twenty-fifth week of pregnancy the fetus weighs about 650-660 grams and it is almost long 30 cm.

When does one enter the seventh month of pregnancy?

From the end of the twenty-sixth week of pregnancy.

How much does the fetus weigh in the fifth week of pregnancy?