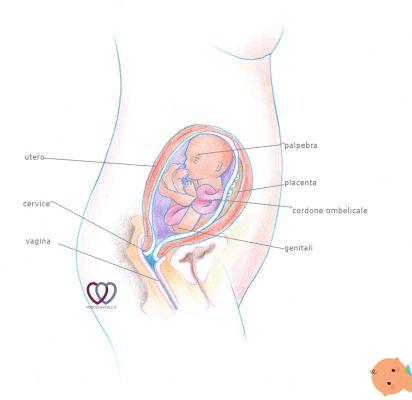 The little one kicks more frequently and carrying the baby bump around is more and more tiring. With the scientific advice of the gynecologist Elisabetta Canitano, president of the non-profit association Vita di donna, let's see what happens to the woman's body and that of the child during the twenty-first week of pregnancy.

Symptoms of the twenty-first week of pregnancy

At this stage of pregnancy the uterus is constantly expanding, resulting in an increase in pressure on the organs and lungs. This can have consequences such as shortness of breath, fatigue and a greater stimulus for the urination (in short, you will pee more often).

Health advice in the twenty-first week of pregnancy

From the twentieth week of pregnancy onwards there is a risk - albeit statistically infrequent - that a pregnant woman will contract preeclampsia (or gestosis), a very particular condition which, in addition to episodes of headache or temporary visual disturbances, can also manifest itself with inconspicuous symptoms such as a blood pressure unbalanced (top 140 maximum and 90 minimum) or the presence of protein in the urine at levels over 290 mg / l.

The causes of this pathology are not yet completely clear but if not adequately treated, its consequences can degenerate into violent convulsions with generalized damage to the organs (eclampsia) with potentially fatal consequences for both the mother and the fetus.

Advice: to sleep more peacefully it is good monitor blood pressure frequently, undergourinalysis and, especially if you fall into one of the categories most exposed to gestosis risk, do some more checks, such as Doppler flowmetry of the uterine arteries

What to do in the twenty-first week of pregnancy

Continue to monitor the power supply

Nutrition must always be healthy and balanced, especially during pregnancy. Lweight gain it is an essential factor in gestation, but this should not be an excuse to indulge in an unregulated diet. According to the recommendations of the American Institute of Medicine, in the second and third trimesters, weight gain should be on average:

In general, there is no strict need to take vitamins and minerals, unless there is a specific indication from the doctor. If there is no specific problem, a varied diet, rich in fruit and vegetables, may suffice. In particular, iron supplements should not be introduced unless blood tests show a specific deficiency.

As regards the fluorine, the ministerial guidelines for the promotion of oral health suggest the possibility of taking it starting from the third month of pregnancy, in the dose of 1 mg per day, but in the same document it is written that the lack of solid scientific data on efficacy does not allow to strongly recommend it. A more recent ministerial document, the Recommendations for the promotion of oral health in perinatal age, finally concludes that, on the basis of the available data, fluoroprophylaxis in pregnancy is not indicated.

The fetus in the twenty-first week of pregnancy

Le taste buds they are formed on the tongue: thanks to them, the child will be able to appreciate the taste of food. At 21 weeks, the fetus is also able to swallow. The baby sleeps most of the time, but when he is awake he kicks and somersaults. Its weight is around 300 grams and is around 16-18 centimeters long. At 21 weeks, the fetus is able to swallow.

The eyebrows start forming around this time.

How long does a 21 week fetus sleep?

During the twenty-first week of pregnancy, the baby sleeps between 16 and 20 hours a day.

How many months are in the XNUMXst week of pregnancy?

The twenty-first week is still in the fifth month of pregnancy.