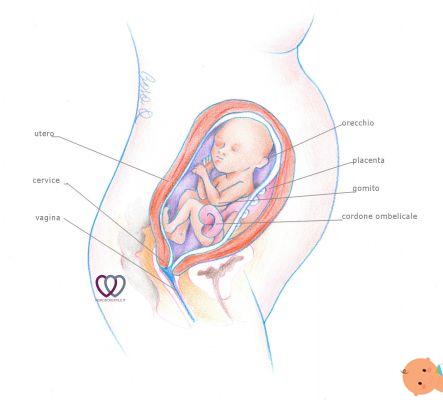 The uterus is as big as a watermelon and the baby's body continues its formation by developing the respiratory system. With the scientific advice of the gynecologist Elisabetta Canitano, president of the non-profit association Vita di donna, let's see what happens to the woman's body and that of the child during the twenty-fourth week of pregnancy.

Symptoms in the twenty-fourth week of pregnancy

Having reached this period of gestation, the expectant mother shows more and more fatigue and breathlessness: after all, the uterus is now very bulky and the baby begins to weigh. Even episodes ofinsomniac and anxiety they become perfectly normal - even for those who have never suffered from it before - since hormonal changes significantly affect mood and quality of rest. Nutrition (no heavy foods, no caffeine) and moderate exercise can help improve the situation.

It is not uncommon then that in these weeks you can experience some vision problems, with eyes that are very sensitive to light and easily irritable. Here, too, the cause is due to pregnancy hormones, which can swell the eyelids and provoke burning in the eyes.

Finally, from the sixth month it is already possible to try a light one breast pain, who is preparing for breastfeeding.

In second trimester of pregnancy Abdominal pains can be common, especially those located under the ribs that are caused by the growth of the baby and the push from the uterus, but should not be ignored if accompanied by bleeding and acute cramps.

Towards the end of the second quarter another complication could also arise: the preeclampsia which usually occurs after the twentieth week and which can also cause headaches, swelling of the hands and feet.

Sleeping well is always important, but if possible it is even more important during pregnancy. In fact, sleep favors the good mood, allows you to recharge your batteries, prepares you in the most natural and effective way for the joyful but demanding task of taking care of the newborn and breastfeeding it.

Advice: some rules can actually prevent sleep-related problems and are also useful for controlling them in the event that they occur. Here are the main ones.

Read also: Back pain in pregnancy

Weight gain in pregnancy at the 24th week

How much weight to take depending on the trimester of pregnancy

Here are the indications if you start from a normal weight situation.

It is not a perfect pattern to follow, as long as the increase is slow and steady, both for you and for your baby.

The fetus in the twenty-fourth week of pregnancy

Images of the fetus at 24 weeks of pregnancy

At 24 weeks, the baby is the size of an artichoke or corn on the cob. Here are pictures of a fetus at week 24.

The mother perceives her movements more and more often. Intano the child, who now weighs more or less 500 grams and measure 28-29 centimeters, the sucks the little finger with great vigor and points the feet against the walls of the uterus. Hair sprouts quickly on the head and the small lungs begin to produce surfactant, a substance that at the moment of birth will allow them to expand and perform the acts of spontaneous breathing. However, the respiratory system is not yet fully formed and the baby would not breathe autonomously outside the uterus.

In addition, in recent weeks the brain and the auditory system are sufficiently developed to allow the fetus to perceive external sounds (and therefore also the vocal stimuli of the parents).

Do you feel the baby move in the belly?

At the twenty-fourth week of pregnancy, the baby is very agitated in the belly and the movements are also perceptible from the outside.

What month are we in the twenty-fourth week of pregnancy?

We are in the sixth month of pregnancy.