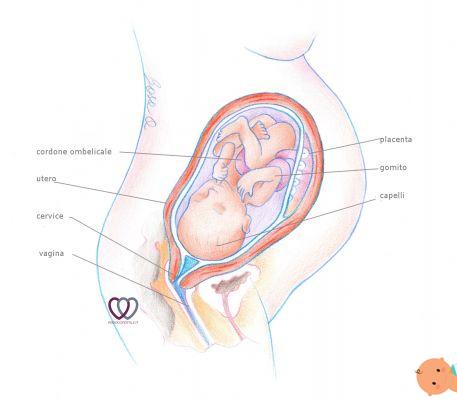 Between fatigue and various swelling, the expectant mother continues to produce the colostrum, a dense yellowish secretion that may occasionally begin to leak from the breasts. Once considered almost harmful to babies, colostrum is actually a super food from thevery high nutritional value, essential in the first months of a baby's life to protect and nourish it.

Weight gain continues and the pressure exerted by the uterus on the bladder makes visits to the bathroom much more frequent. Other frequent symptoms can be:

The seventh month of pregnancy ends and the birth of the baby is getting closer and closer. With the scientific advice from gynecologist Elisabetta Canitano, president of the non-profit association Vita di donna, let's see what happens to the body of the mother and that of the child during the twenty-ninth week of pregnancy.

Health advice in the twenty-ninth week of pregnancy

Posture and back pain

Back pain is a very common "enemy" for a pregnant woman. Weight gain in fact puts a lot of pressure on lumbar and the bulk of the baby bump often leads future mothers to hire incorrect postures which can only exacerbate the problem.

Advice: a first precaution to be adopted to improve the situation may be that of do not sleep on your right side so as not to compress the inferior vena cava. Above all, however, it is important to stay active, do stretching exercises and maintain positions that do not require too much effort on the abdominal part.

What to do in the twenty-ninth week of pregnancy

From 29 weeks of pregnancy, a third ultrasound is generally recommended, although this is usually done around 32 weeks. This ultrasound is used to ascertain that it is development of the child is regular (growth) and to evaluate the amount of amniotic fluid. In some cases, even one is prescribed fourth ultrasound: it usually happens if the pregnancy goes beyond the term, that is, it exceeds 40 weeks.

Typically, at this stage of pregnancy, women who wish to do so begin taking part in a birth accompaniment course (what were once called "childbirth preparation"). This is an opportunity offered free of charge (or with the payment of a ticket) by maternity wards and counseling centers, but there are also private ones. Participating has advantages: they provide the possibility of raise any doubts to doctors and midwives, they also represent an opportunity for make friends with other moms (or other couples) who are having the same experience. In some structures they also provide meetings with the psychologist, aimed at exploring the emotions related to the experience of motherhood (and fatherhood), e gentle gym sessions, during which breathing techniques are taught that can be useful at the time of childbirth.

The fetus in the twenty-ninth week of pregnancy

Start theactivity of the thymus, an antibody-producing gland found in the chest. The bones are fully developed, although they are still soft and very flexible.

The fetus is now about 37/38 cm and weighs about 1250 grams. There forehead it is more and more proportionate and the subcutaneous fat begins to transform into white fat, which is a real reserve of nourishment. The eyes are also more and more developed and the little one begins to be attracted to light sources.

How much does a fetus weigh in the XNUMXth week of pregnancy?