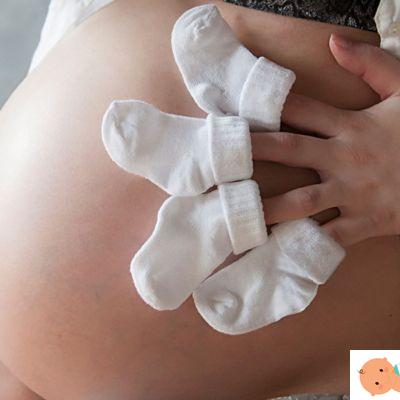 Find out about wait for twins it's always a nice surprise that upsets many of the future parents, incredulous at the news. After the first questions about what it will be like to deal with two or more Infants simultaneously, the future mother another question arises: how will I give birth? The twin birth in fact it brings with it many unknowns, but don't worry!

How long does a twin pregnancy last

La twin pregnancy it has, theoretically, the same duration as the single one, that is, forty weeks. But very often the birth takes place before the term because, in the case of several fetuses, the placenta - double or united as it is - ages faster. For this reason, the 38th week is never passed and, on average, birth takes place more easily around the 37th.

When to give birth to twins

The doctor will decide when to do to be born children, in the absence of natural contractions that could anticipate it. If you wait for gods gemelli you already know that your condition presents more risks than a single pregnancy, and even though most twin pregnancies have a normal course there is still the possibility that the birth is premature. For premature birth we mean a birth before 37 weeks of gestation, and in the case of twins it happens in about 60% of cases, against 5-10% of single pregnancies.

Twin pregnancy can be monochorionic o bicorial. In the event that two spermatozoa have fertilized two eggs, the amniotic sacs and placentas will be separated, which is therefore a bicorial pregnancy.

In the event that a sperm has fertilized only one egg and the division into two embryos (or more) has occurred later, the twins can find themselves in the same amniotic sac or in separate bags, but they share the same placenta. Monochorionic pregnancy therefore exposes fetuses to a greater risk due to the partition of the circulation coming from the placenta: one fetus, in fact, could receive less blood supply than the other. This factor could anticipate labor.

A common belief is that twin pregnancy equals induced delivery, but that's not necessarily the case. If the pregnancy it is safe, the twins grow well and the mother has no problems, there is no reason to induce childbirth. This only happens if complications arise that suggest one preterm birth so as not to jeopardize the health of children and parturient.

Childbirth, however, can be induced if it reaches the 38th week, which is considered the limit beyond which it is better to give birth to children due to the deterioration of the placenta.

In any case, half of twin pregnancies come to term, while only a small part does not reach the 32nd week.

The natural birth of twins

If the labor you start early and in the absence of contraindications, twins can be born of course. The assessment will be done by the medical team upon arrival at the hospital, but in many countries the birth of twins for vaginal route is more widespread than in Del Paese, where cesarean delivery is often scheduled, a practice widely used also for single pregnancies (according to Istat, in 2022 the beautiful country held the European record, 36,3% of births with caesarean section against 26,7% of the European average).

If the pregnancy reaches term, that is in the case of twins at 38 weeks, delivery can be induced in favorable conditions, in particular the cephalic position of the fetuses.

The planned caesarean delivery of the twins

More often, as we mentioned, in order to avoid risks and due to the particularity of twin pregnancies, doctors prefer schedule a caesarean section around the 38th week. In other cases, caesarean section proves necessary for complications that occur before term, such as fetal distress or stunted growth of one of the fetuses. The cemergency exareum it is more common in monochorionic pregnancies, where twins share the same placenta, particularly in the case of Fetal-Fetal Transfusion acute (a rapid and consistent passage of blood from one twin to another).

In the vast majority of cases, twin pregnancies take place quietly, only with some extra control and care: twin births should not scare future mothers, because whether it is a natural or caesarean, induced or full-term birth, today the medical teams they have the tools and the preparation so that everything runs smoothly.

Twin pregnancy: when the babies are two (or more)

Twin birth: why and how are twins born

TAG:
Water birth, what are the benefits ❯

add a comment of Twin birth: natural or caesarean?