Types of ultrasound in pregnancy 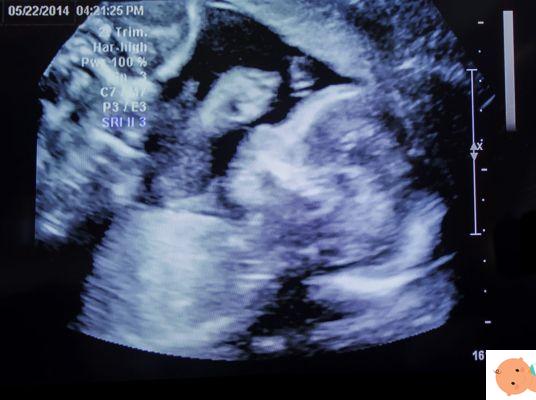 When we watch a film or a TV series it often happens to "attend" to ultrasounds in which one is revealed pregnancy, the presence of twins, the sex of the unborn child or still some problem. Too bad that these representations are often unrealistic because they are the result of cinematographic needs: in the very first weeks of gestation the ultrasound scans are internal! So let's clarify the types of ultrasound in pregnancy and how many the expectant mother will have to do.

What are ultrasound scans for during pregnancy?

Usually, the first ultrasound has the purpose of verifying the existence of the pregnancy and to make sure that everything is fine. Later, depending on who follows the gestation - private gynecologist, public facility or obstetrician - but also on the type of pregnancy - at risk, twin - the ultrasound scans may be a minimum of two (one in the second trimester and the other in the last) to multiple. In any case, at each ultrasound the doctor measure the fetus to check that the different parts of the body are in line with the growth and weeks of gestation, but also looks at the placenta, cord, amniotic fluid, sac, and uterus.

Read also: Transvaginal ultrasound and control of the uterus and ovaries

The difference between internal and external ultrasound

As we anticipated, they exist two types of ultrasound: the first sustainability, the second Outdoor. When do you choose one or the other?

Internal ultrasound or transvaginal, also known by the acronym of TVS (Trans-Vaginal Sonography) is performed with an instrument which, covered with a latex sheath (like a condom) and then with a gel, is inserted inside the vagina. The probe emits sound waves that allow us to evaluate the state of internal organs. L'transvaginal pelvic ultrasound allows to evaluate the state of health of the fetus, its morphology, the limbs and the cephalic pole. And the first ultrasound to which the expectant mother is subjected: it can be requested as soon as the test is positive to evaluate the implantation and the presence of the heartbeat, otherwise it is usually done between the sixth and eighth a week as a control of the first quarter.

Starting from second semester, also following the growing belly, external ultrasound scans are usually performed, also called transaddominali. This is the best known type of ultrasound and, in the absence of different indications, it is used throughout the rest of the pregnancy. In some cases, such as suspected cervical shortening or early initial dilation, transvaginal ultrasound remains the best assessment tool.

How many ultrasound scans are done during pregnancy

Il number of ultrasound scans it can vary based on two factors: who follows the pregnancy or the state of pregnancy itself.

In the first case, if you contact a private gynecologist with ultrasound in the office it is very likely that you will have an ultrasound every month. During each, he will take measurements and evaluate the overall state of gestation.

If he didn't have an ultrasound or you were followed by National Health System, the ultrasounds provided are only three:, one per quarter:

In these three cases, with prescription, the service is covered by the SSN through a ticket, just book (but remember to do it in time).

In the case of high-risk or twin pregnancies, the ultrasound scans will obviously be many more.

The practice of being followed by your gynecologist and the willingness of future parents to know that everything is fine makes the number of ultrasound scans carried out in pregnancy higher than necessary (which would be, in fact, three) but the recommendation is not to exaggerate: if on the one hand it is reassuring to see the baby and hear its heartbeat, from a psychological point of view it could be more traumatic in the event of an abortion, because parents don't expect it. On the other hand, ultrasound scans too early (for example to know the sex of the unborn child before the morphological one) could show unclear anomalies, correctly visible only during the morphological examination of the twentieth week, and therefore lead to errors in evaluation.

A trend, that of the abuse of ultrasound scans in pregnancy, which seems to concern not only the country but many other countries.

Ultrasounds During Pregnancy: How Many and How Often?

TAG:
Types of birth: the guide to choosing the best one for you ❯

add a comment of Types of ultrasound in pregnancy