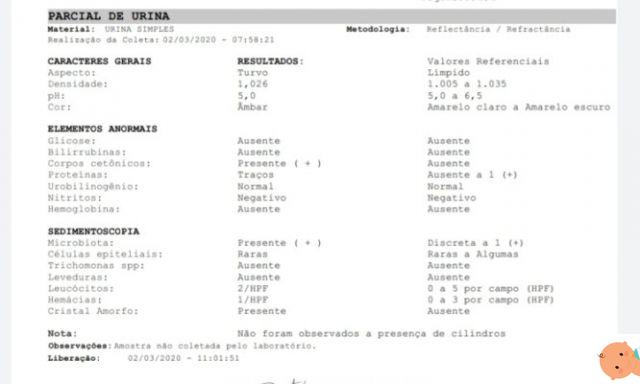 L'urinalysis in pregnancy it is done every month: it is the exam that is performed most frequently during the nine months, as it provides information on the state of health of the woman, for example, it allows to detect urinary infections or to monitor pathologies such as gestational diabetes and preeclampsia, complications important aspects of pregnancy.

Cost of urine tests in pregnancy

The urinalysis is free if it is carried out in public facilities or structures affiliated with the National Health Service. To obtain the exemption, the doctor must indicate the exemption code for pregnancy in the recipe book.

How do you read the report?

The values ​​are interrelated and the individual information must be interpreted in the context of the report.

Here are the items that appear in the chemical-physical examination.

"In pregnancy, a slight increase in proteins is considered normal and for this reason, if outside pregnancy the normal limit is set at 150 mg / l, in the nine months a presence of up to 300 mg / l is tolerated.

The sediment is analyzed under a microscope. Here is what you can find.

Read also: How many ultrasound scans should you do in pregnancy?

Urine culture: when is it done?

In addition to the urinalysis, the doctor may request a urine culture if the woman reports burning when urinating or an urge to urinate often, possible signs of infection, or if the urine test reveals values ​​that indicate an infection. With urine culture the 'guilty' germ is identified and with the antibiogram, carried out automatically if the urine culture is positive, the most suitable antibiotic to counteract it is identified.

How to properly collect urine

La urine collection it is always done in the morning, when there is a greater concentration of dissolved substances and therefore the analysis is more significant. It is not necessary to fast, while it is important to first perform the intimate hygiene and discard the first jet of urine, which are those stagnating in the urethra and therefore more in contact with the outside.

The sample taken must be brought to the laboratory within 2 hours, in order not to degrade or alter the substances or multiply the bacteria. If a longer time is foreseen, it is advisable to keep it in the fridge or to collect it when it arrives in the laboratory.

TAG:
Ethics explained to children 5 rules on the art of doing the right thing ❯