Urine in pregnancy, everything you need to know 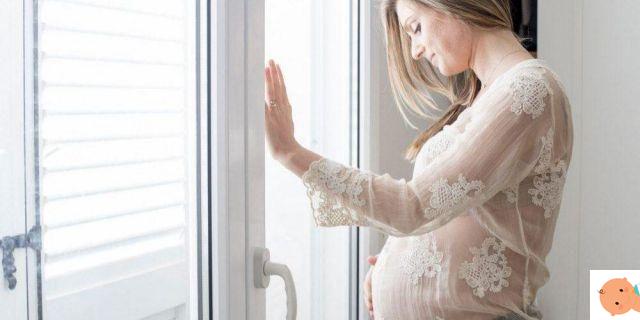 During pregnancy it is one of the fixed appointments, one that you cannot really give up. We are not talking about the hairdresser or even the beautician, although both are not negligible. Let's talk about urinalysis. It is a very simple test that is repeated several times over the course of months and which gives important information on the state of health not only of the urinary tract, but also of other organs. Monitoring urine during pregnancy is therefore essential and now let's see in detail why.

What is the use of the urine test in pregnancy

It may seem strange, but peeing is also an indicator of well-being, especially during pregnancy. In addition to its components, even its appearance can in fact tell us a lot about how we are and if there are any problems that we apparently do not see. Therefore, regularly undergoing this examination is very important.

The presence in the urine of some substances (such as glucose or proteins) becomes the indicator of something that is not working as it should and that must be investigated in more detail. Recall that some ailments do not always give symptoms. Just to give an example, staying on the subject of the urinary tract, cystitis in pregnancy is sometimes asymptomatic. Without routine urinalysis, therefore, it may not be diagnosed, leading to more complex problems in the long run.

How often to undergo urinalysis during pregnancy

It is one of the exams that are done most regularly, practically every month. The recommendations of the Ministry of Health say that the complete urinalysis, together with the urine culture (we will see what it is later on), must be done:

In these three gestational periods, the examination is entirely paid by the National Health System (therefore it is free). However, gynecologists are more likely to prescribe it every month, due to its relevance in terms of health.

How urine is collected

The urine to be analyzed must be early in the morning because the concentration of the various substances contained is greater. Unlike most blood tests, you don't need to fast. Always wash your hands well before starting. Use a sterile container. You can buy it in pharmacies, parapharmacies or health centers, although it is often also found in supermarkets.

The first jet of pee should not be collected because it stagnated in the urethra and was more in contact with the outside. Also be careful not to touch the edge of the container and the genitals with your hands. The sample must be delivered to the analysis laboratory as soon as possible, preferably within one hour of collection.

How do you read the urine test report during pregnancy

The urinalysis is basically divided into two parts:

Physical analysis indicates the main characteristics of the urine. Based on them and any modifications, the doctor can understand if in fact there is some small or big problem. We list a few to give you an idea of ​​what we are talking about.

Substances found in the urine during pregnancy (chemical examination)

In addition to the characteristics we have just listed, the chemical-physical analysis also gives information on the presence of some substances in the urine. In most cases they shouldn't be there, so they're a sign that something is wrong. Let's see some examples.


Microscopic examination of urine in pregnancy

In addition to being analyzed from the point of view of appearance and chemical composition, the other parameter that is checked is the sediment, that is, what settles on the bottom of the test tube after the centrifugation process and is viewed under the microscope. It is therefore possible to find:

Urine culture: what it is and why it is done

Urine culture is a urine test that is performed in the same way as the "simple" one we have talked about so far. Its purpose is to detect any bacteria that indicate a urinary tract infection. It is also a "second level" exam. If the normal one gives the suspicion of an infection, a urine culture is done to understand the responsible person.

The urine culture is associated with the so-called antibiogram. It is a laboratory test that puts the microorganism found in the urine in contact with an antibiotic. The aim is to figure out which drug is most effective for that specific bacterium. Not all antibiotics are in fact indicated for the treatment of infections. Often what is suitable for treating a urinary problem is not good for the respiratory tract. Moreover, using drugs improperly favors antibiotic resistance, the phenomenon that makes diseases resistant to certain drugs because the pathogen has "got used" to their mechanism of action. It is therefore important to choose the right product.

Use of antibiotics in pregnancy

The urinalysis is positive, the urine culture has identified the culprit bacterium, the gynecologist prescribes the antibiotic and you worry. Don't panic, moms! It is a well-considered choice for you and your baby's health. There are antibiotics that are compatible with pregnancy and you shouldn't be afraid of harming your little one. They have been specially designed. So be calm. It is much more important to heal. The risk of some diseases is much higher than that of antibiotics. In any case, never do it your own way: drugs are only taken under medical supervision.

add a comment of Urine in pregnancy, everything you need to know