Uterus: how it turns into pregnancy and childbirth 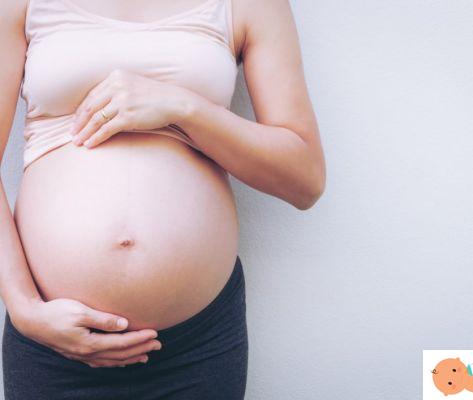 Uterus: how it turns into pregnancy and childbirth

Il woman's body undergoes huge changes since the first months of pregnancy. These changes contribute to welcoming the embryo and to favor the development and growth of the baby and, finally, to give it birth with labor and delivery. But how the uterus transforms during pregnancy and childbirth? Let's see what happens in the nine months.

The uterus is a thick-walled, pear-shaped organ that it normally measures seven centimeters long and weighs 30 grams. It has a lower end facing down, called cervix or cervix and a more voluminous top called body of the uterus.

During the first weeks of pregnancy, the shape of the uterus remains unchanged, but gradually becomes softer. By the 14th week it will have a flattened spheroid shape. Over time, a protective mucus plug forms inside its cavity.

Furthermore, in the uterus, the placenta: its development begins when the embryo is implanted, but will reach its full functionality around the twentieth week of pregnancy. The placenta is essential to ensure metabolic and nutritional exchanges between maternal and fetal blood.

The implantation of the embryo in the uterus

How the uterus changes during pregnancy

As pregnancy progresses, the uterus rises more and more towards the abdominal cavity. The size of the uterus adds five times the normal size and this change is also associated with an increase in blood flow to the uterus and an increase in muscle activity. In practice, the uterus is a truly extraordinary organ, capable of changing its shape, its size to first accommodate an embryo and then a fully formed baby, together with the amniotic fluid and the placenta!

Overall the uterus gains weight from 50 grams up to 1000 grams (about a kilo), and up to the thirty-eighth week, after which she no longer gains weight but begins to stretch to accommodate the size of the growing fetus. Eventually it begins to sag near the onset of labor and at this point the cervix becomes softer and softer to allow the baby to exit. It will be the lower part of the uterus, the neck, to open more and more thanks to the contractions during labor until it reaches the expansion by 10 centimeters, the moment when the baby will finally come out.

Contractions are the result of the action of two key hormones: the prostaglandin, which manages to soften the cervix, e oxytocin, which stimulates contraction. The contractions cause a shortening of the muscle fibers and slowly the cervix opens, dilating.

During the various stages of pregnancy it is quite common to experience small cramps in the belly, pains in the lower abdomen and the so-called "hard belly". In particular, a hard belly is common in the second and third trimesters of true contractions are rhythmic and painful and start every five minutes.

On the contrary, the contractions of Braxton Hicks they are preparatory, they resemble spasms of the uterus musculature which, however, do not occur in a rhythmic manner and are temporary. It is advisable to lie down and rest a little when we feel a stiff stomach and wait for the discomfort to pass by itself. Call the doctor, however, if you have bleeding, very severe pain or if the contractions become rhythmic and close together.

For the entire duration of pregnancy, the cervix remains completely closed, to protect the fetus from the entry of infectious agents and to prevent premature birth. The uterus is also protected by a mucous plug which is expelled only at the end of pregnancy, near the onset of labor.

TAG:
Uterus for rent, maternity leave is not mandatory ❯

add a comment of Uterus: how it turns into pregnancy and childbirth