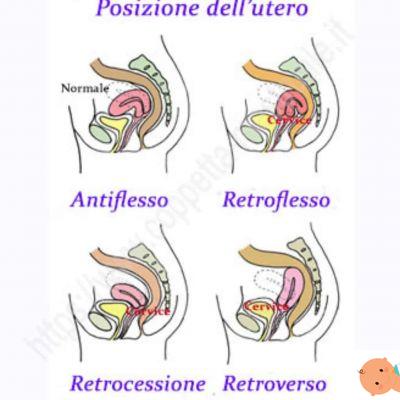 In anatomy a healthy and normal functioning uterus it is located within the pelvic cavity and has a anti-bending and antiverse position. There are numerous cases in which the woman's uterus takes on one retroflex or reverse position. A retroverted uterus is a form of "tilted uterus," a category that also includes the anteverted uterus, which is a uterus that is tilted forward rather than backward. But let's find out the meaning of the various types.

Read also: Uterus: how it turns in pregnancy and childbirth

Nell 'utero retroflexo the uterine body is tilted towards the back. This anatomical condition does not cause difficulties from a clinical point of view, therefore it does not affect conception or the progress of the pregnancy.

The gynecologist doctor during the visit with the speculum he feels a displacement of the cervix forward. L'internal ultrasound allows you to verify this anomaly. Generally the retroflection of the uterus it has been present since birth. The retroflexed uterus can cause urinary retention.

The retroverted uterus (the backless) it is an abnormality in the position of the organ within the pelvic cavity and is present in about 20-30% of women. nell 'retroverted uterus the flexion angle between the cervix and the vagina is greater than 90 °. This anomaly may be present from birth or the uterus may change its position within the pelvic cavity due to the presence of fibroids, due to the weakening of the pelvic ligaments caused by an inflammatory process, due to an abortion or following a particularly complex birth. L'endometriosis untreated, salpingitis and tumors can be the cause of one uterine retroversion. Less anatomically severe, tissue distention during menopause may also be a predisposing factor.

Adult women with a retroverted uterus complain in the menstrual period heaviness in the lower abdomen and increased back pain in the lumbo-sacral region. The most significant symptom is the dyspareunia, or painful sexual intercourse. The retroverse position of the uterus also favors the appearance of hemorrhoids and chronic constipation.

To correct the physiological positioning of the uterine body, a surgery named hysteropsis. Doctors recommend intervening only in cases of pronounced retroversion, to relieve discomfort during urination and defecation and eliminate unbearable back pain. Hysteropexy surgery can be performed in laparoscopy.

Changes in the position of the uterus are important for fertility disorders; for example, a retroverted uterus can give painful symptoms during sexual intercourse and can have a certain importance when this represents the outcome of inflammatory events and is blocked in this position (over the years it can favor the appearance of constipation and hemorrhoids ).

The major disorders related to the retroverted uterus concern a possible increase in pain in the lumbar region, which are accentuated in the premenstrual period or during the cycle, as the menstrual material making it more difficult to get out, causes a more decisive contraction of the uterine muscle.

Furthermore, some women may experience an annoying sense of stretching downwards, with painful sexual intercourse, as well as bladder, intestinal, or more vague and general disorders such as headache, nervous cough, constipation, irritability, gastric disturbances.

In case of conception and pregnancy, on the other hand, the retroverted uterus it does not represent an obstacle, nor is it cause of infertility. Even in the presence of this anomaly, the chances of getting pregnant are the same as for a woman with an anteverted uterus.

There are two types of retroversion:
• Primary or congenital: it is present from birth and the uterus has assumed this position naturally during development;
• Secondary or acquired: the uterus changes position later, following an abnormality in the pelvic area, more frequently due to a fibroid, of diseases such as endometriosis, of inflammatory and neoplastic processes.

Typically, around 14-15 weeks of pregnancy, the uterus moves forward on its own, becoming anterior to reverse, and remains so until the end of gestation. About a month after birth, when it regains its normal size, the uterus returns retroverted, simply because the ligaments bring it back to its original place.

TAG:
Postpartum, 12 things no one tells you ❯

add a comment of Uterus positions: retroverted, retroflexed or retroverted