Vaccinations for children: DO NOT weaken the immune system 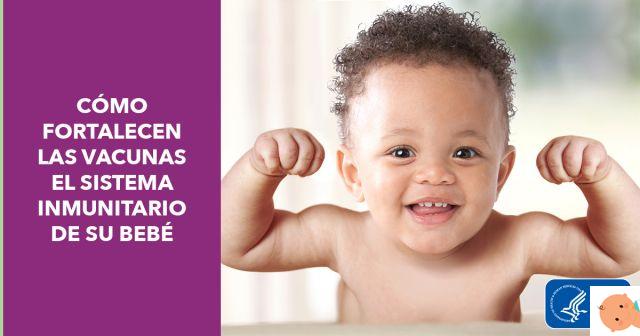 One of the most common fears in parents who are suspicious of vaccinations, especially if they are mandatory, is that vaccines can weaken their child's immune system, making them more susceptible to other infections than those prevented by the vaccines themselves. Various studies have already indicated that it is a unfounded fear, showing that there is actually no increase in infectious episodes after vaccinations. And now more confirmation comes from the United States.

A study published in 2022 in the "Journal of the American Medical Association" clearly concludes that children who received vaccinations in the first two years of life they are no longer at risk of unvaccinated peers to contract some other infection. And this is true whether the vaccinations received are few, or whether they are many.

The work, funded by the American Centers for Disease Control and Prevention, was led by researchers from Kaiser Permanente, a major health and research organization in the United States.

The scholars considered nearly 200 children between two and four years of age, affected by some infection not related to vaccinations - for example respiratory and gastrointestinal infections - and compared them with about 750 children of the same age and characteristics who, however, had not had infections. In particular, they went to see if there were any differences in the two groups with respect to the vaccinations performed and the total number of antigens received. Recall that antigens are the molecules which, in vaccines as well as in "natural" microbes, stimulate the immune system.

The results were very clear: no difference between the two groups, indicating that having received vaccinations did not lead to any weakening of the immune system. Regardless of the number of antigens received for each single vaccination session (up to over 130), vaccinated children did not get sick any more than unvaccinated children. A fact - reads an editorial commenting on the scientific article - which should further reassure parents of the safety of vaccinations.

Some counts on vaccine antigens

The study in question refers to the United States, but even in Del Paese some parents think that the current vaccination plan is too crowded, involving too many vaccinations in too little time. Let's review: for the first two years of a child's life, the plan provides protection against 14 diseases in all (10 of which are mandatory):

Even more interesting, however, is to go and see how many there are antigens actually injected in the child. Generally, in fact, a vaccine contains more than one, that is, it contains more than one molecule capable of soliciting the immune system (as indeed happens in nature: every virus and bacterium we come into contact with contains from 3000 to 6000) .

Taking into consideration the 14 vaccines mentioned above, the antigens result in everything 253: they range from the single antigen for hepatitis B, to the two antigens for rotavirus and Haemophilus B, to 93 for MPR, to 105 for meningococcus B (information contained in the booklet Pediatric vaccinations, the difficult questions, of the Higher Institute of health). Many? Well, think that children born in the sixties and seventies received well 3215, because they made smallpox (198 antigens) which is no longer done today (the disease has been eradicated from the planet) and above all they made a vaccine against pertussis that contained as many as 3002 antigens, while the current one contains only three.

But that's not all: as the ISS brochure recalls, "it has been calculated that at the moment of birth and in the first hours of life, the child comes into contact with more than 400 different species of bacteria. Since each bacterial species has from 3000 to 6000 different antigens, it follows that a newborn is immediately exposed to more than a million antigens. "Far more than those he receives in two years with the 14 vaccinations provided.

The risks of measles

Read also: Measles, cases in Europe have increased by 400% in the last year

Other sources for this article: Do you get too many vaccines in too young children? in Doctor but is it true that?

Do vaccines weaken the immune system?

There are no scientific studies that prove this.

add a comment of Vaccinations for children: DO NOT weaken the immune system